Forex Analysis & Reviews: Overview of the GBP/USD pair. November 25. A year has passed. The UK and the EU are still in negotiations. The rhetoric of Maros Sefcovic does not change. 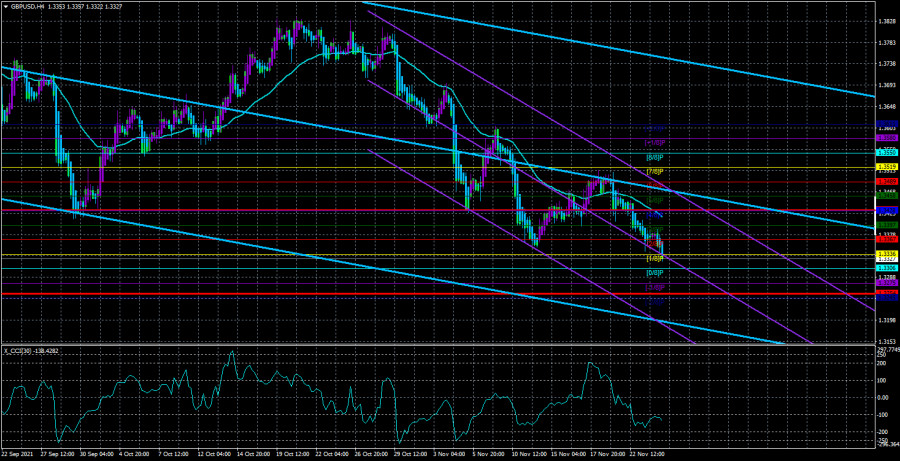 The GBP/USD currency pair also continued its slow and steady decline on Wednesday. Moreover, it began in the morning, when there were no important publications and events in the UK. Thus, market participants, in principle, are now focused on sales of the euro and the pound, as well as purchases of the dollar. To stick to this strategy, they don't even need a strong, supportive dollar, a "foundation" or "macroeconomics" right now. Thus, the British currency continues its depreciation against the dollar, and we can only guess how much longer it will continue. Recall that for three quarters of 2021, the pound/dollar pair showed its frank unwillingness to decline. Therefore, thoughts have repeatedly arisen that the markets simply ignore the entire fundamental background from the UK. However, in the last quarter of 2021, the markets decided to get even for the previous three quarters. On the one hand, there are plenty of reasons for the fall of the pound sterling now, given the huge number of geopolitical and internal problems that currently exist in the Kingdom. At the same time, the fundamental background from overseas is getting stronger every day, so there are no questions. The only strange thing is that in the first 9 months of the year, the markets did not seem to pay attention to all these factors. Thus, the technical picture for the pair is now completely "bearish": both linear regression channels are directed down, the price is below the moving average line, and the CCI indicator has been discharged after two visits to the oversold area and is not going to signal a possible upward reversal again in the near future.

Maros Sefcovic: There is progress in the negotiations, but not on key issues.

Only yesterday we listed all the problems of the UK, starting from the "devastation after Brexit", ending with a new "wave" of the pandemic, as a new batch of "encouraging data" arrived today. Maros Sefcovic highlighted the issue of advancing the negotiation process between the UK and the European Union on the issue of the "Northern Ireland Protocol". On the BBC TV channel, he said that there is some progress in the negotiations, but not on the key, most important points. "If we continue to engage in political posturing, I don't think we will be able to solve the problem that is currently acute for the people of Northern Ireland," said the vice-president of the European Commission. Recall that the problem concerns the same regime of inspections and customs at the border between Ireland and Northern Ireland, which was transferred to the Irish Sea, according to the terms of Brexit. Now all inspections take place in the ports of England, which significantly complicates the procedure for the delivery of all goods to the island of Ireland from the rest of the UK. Thus, Northern Ireland suffers, which remains part of the Customs Union, but also part of the Kingdom. London continues to demand a complete revision of the "Northern Ireland Protocol", as it believes that its current version has failed and is ineffective. According to the latest information, it also became known that London is seeking a revision of the clause on the settlement of disputes concerning trade between Britain and the EU, as well as the rules of the EU Single Market. At the moment, the European Court always has the last word, and London wants to abolish this rule by creating a bilateral arbitration body to resolve disputes. Maros Sefcovic on the BBC refused to discuss various negative scenarios, whether it is the enforcement of Article 16 or sanctions from the European Union. According to him, it is necessary to focus on the negotiation process and try to get out of the current situation in a civilized and peaceful way.

At the same time, it is reported that the European Commission has already developed a package of sanctions in case London refuses to fulfill part of the terms of the Brexit agreement. We are talking about the rapid introduction of duties on imports from the UK. A detailed list of all restrictions and measures may become known in the near future and be submitted for consideration among the member countries of the Alliance. Thus, we would conclude that so far the situation has not been resolved in any way, but on the contrary, it is only becoming more complicated. Perhaps the parties will eventually agree, as it was at the end of last year, but so far the situation does not look optimistic. 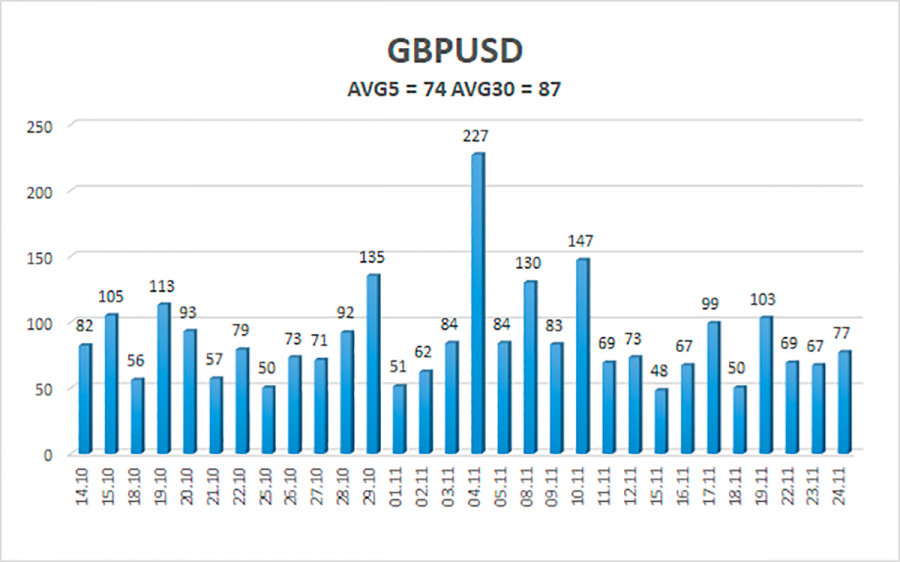 The average volatility of the GBP/USD pair is currently 74 points per day. For the pound/dollar pair, this value is "average". On Thursday, November 25, we expect movement inside the channel, limited by the levels of 1.3254 and 1.3428. A reversal of the Heiken Ashi indicator upwards will signal a round of upward correction.

The GBP/USD pair continues to move downwards on the 4-hour timeframe. Thus, at this time, it is necessary to remain in short positions with the targets of 1.3275 and 1.3254 levels until the Heiken Ashi indicator turns upwards. Buy orders can be considered in the case of a confident consolidation of the price above the moving average with targets of 1.3458 and 1.3489 and keep them open until the Heiken Ashi turns down.

The moving average line (settings 20.0, smoothed) - determines the short-term trend and the direction in which trading should be conducted now.