16.05.202207:02 Forex Analysis & Reviews: Forecast and trading signals for GBP/USD for May 16. COT report. Detailed analysis of the pair's movement and trade deals. British pound: a new sluggish attempt to correct 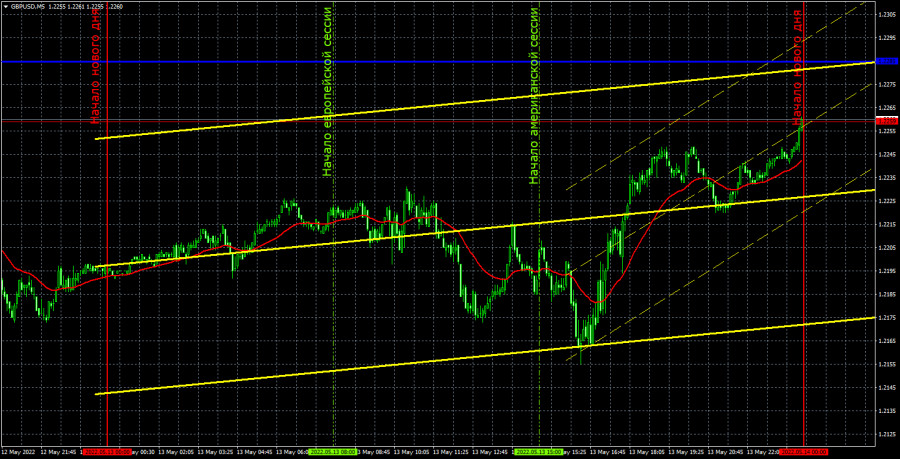 Last Friday, the GBP/USD currency pair once again reached the level of 1.2163, which is the previous day's low. However, this time too, a rebound and a slight growth. In fact, Friday's movement can be called paradoxical, because a 110-point advance is a strong move, it's high volatility and it's a pretty strong rise in the pound. But in the context of the downward trend of recent months, this movement is weak, the pound's growth is scanty, and the movement itself cannot even be called a correction. Even on the hourly timeframe, you can clearly see how weak this movement is. On higher TFs, it will even be difficult to distinguish it in the chart. There were no macroeconomic statistics in the UK on Friday, and the pound was clearly rising all day simply because traders met strong resistance around the 1.2163 level. However, this does not mean that the downward trend is now over. The situation is the same as in the case of the euro: as long as the price is below the critical line, it makes no sense to count on a strong correction or, moreover, an upward trend.

No trading signals on Friday. Unfortunately, the pound is now in an area in which there are practically no levels, since the price was here for the last time a very, very long time ago. And the lines of the Ichimoku indicator, near which many signals are also formed, are much higher than the price, so they practically did not take part in the process of forming a signal during the entirety of last week. As a result, we have a pretty good movement on Friday, but not a single opportunity to work it out. 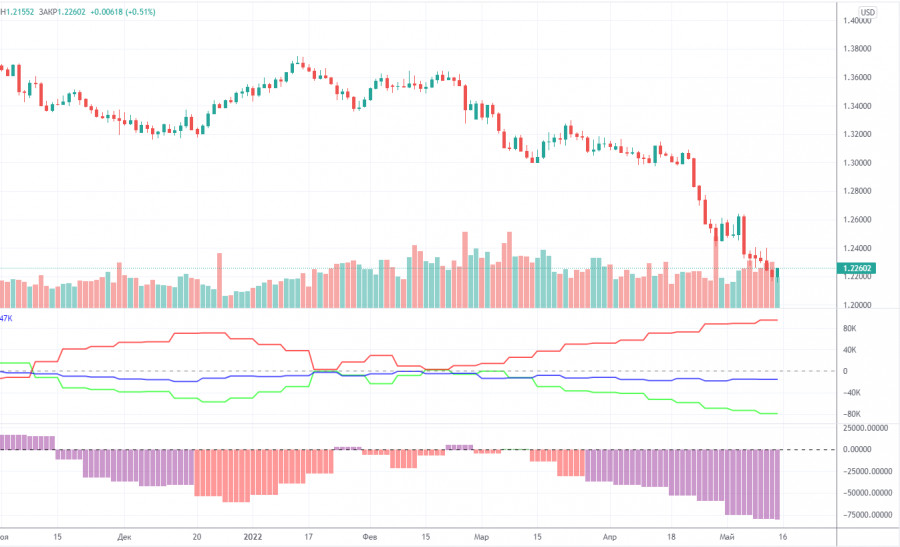 The latest Commitment of Traders (COT) report on the British pound has witnessed a new increase in bearish sentiment among professional traders. During the week, the non-commercial group closed 4,000 long positions and opened 1,700 short positions. Thus, the net position of non-commercial traders decreased by another 5,700. The net position has been falling for three months already, which is perfectly visualized by the green line of the first indicator in the illustration above. Or the histogram of the second indicator. The non-commercial group has already opened a total of 109,000 shorts and only 29,000 long s. Thus, the difference between these numbers is already fourfold. This means that the mood among professional traders is now "pronounced bearish" and this is another factor that speaks in favor of the continuation of the fall of the British currency. Note that in the case of the pound, the data from the COT reports very accurately reflects what is happening in the market. Traders are "strongly bearish" and the pound has been falling against the US dollar for a very long time. We do not yet see concrete signals for the end of the downward trend, however, usually a strong divergence of the red and green lines of the first indicator signals the imminent end of the trend and the beginning of another. Therefore, the conclusion is that an upward trend may begin in the near future, but it is dangerous to try to catch its beginning at the lowest point. The pound may well fall another 200-400 points.

We recommend that you familiarize yourself with:

Overview of the EUR/USD pair. May 16. Euro is preparing for another difficult week for itself.

Overview of the GBP/USD pair. May 16. The pound is trying to rise from the ashes and is waiting with horror for the inflation report.

Forecast and trading signals for GBP/USD on May 16. Detailed analysis of the movement of the pair and trading transactions. 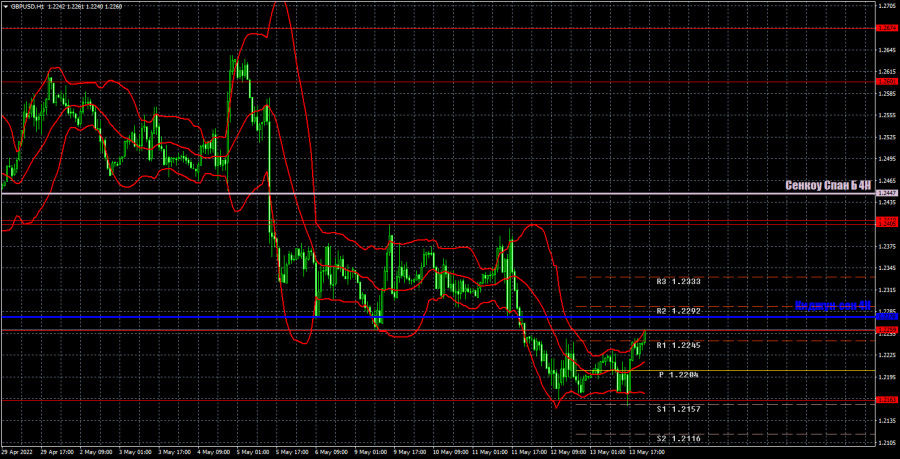 You can clearly see on the hourly timeframe that the pound is again striving to fall as low as possible. So far, we are talking about updating 2-year lows, but we recall that two years ago the pound fell to the level of 1.1400. Therefore, there is, as they say, something to strive for. So far, the pound has only "correctional" grounds for growth. It is the absence of a correction for a long time that suggests that it will nevertheless come true. But there are no technical signals for this yet. On May 16, we highlight the following important levels: 1.2073, 1.2163, 1.2259, 1.2405-1.2410. Senkou Span B (1.2285) and Kijun-sen (1.2445) lines can also be sources of signals. Signals can be "rebounds" and "breakthrough" of these levels and lines. The Stop Loss level is recommended to be set to breakeven when the price passes in the right direction by 20 points. Ichimoku indicator lines can move during the day, which should be taken into account when determining trading signals. The chart also contains support and resistance levels that can be used to take profits on trades. No important events scheduled for Monday in the UK and the US, so the pound will try (until there is a new portion of negativity) to overcome the Kijun-sen line, and volatility may remain high, as it has been in recent weeks.