Forex Analysis & Reviews: How to trade EUR/USD on August 8? Simple tips for beginners. 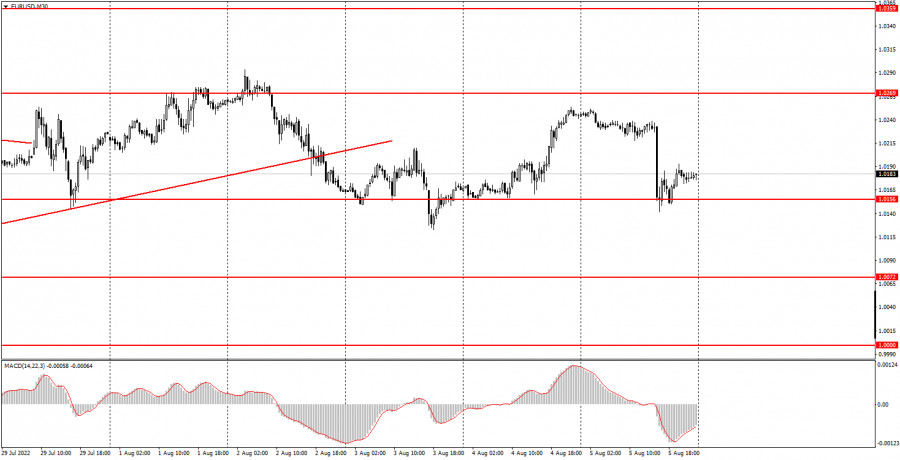 The EUR/USD currency pair was trading very calmly for most of the day on Friday. And the pair fell after the planned reports were released in the US and lost about 100 points in half an hour. In principle, there is nothing surprising about the pair's movement. The reports were expected only in the US, they had to come out at the same time, they were important, and their values impressed the market very much. Therefore, before the statistics from the US, we observed calm trades, after - too, and at the time of release - a "storm". Let's move on to the reports themselves. The most significant NonFarm Payrolls report turned out to be twice as strong as forecasts, the number of new jobs in July amounted to more than 500,000. Naturally, the market reacted with powerful long positions on the dollar. And in addition to Nonfarms, a report on unemployment was also published, which showed a decrease to 3.5%. Recall that unemployment in the US is already at 50-year lows, but, as we can see, it continues to decline. Thus, the statistics from overseas on Friday were very strong, and we are even a little surprised that the dollar rose so weakly on such strong data. But the most important thing is that the euro/dollar pair still remains inside the horizontal channel. Thus, despite the good statistics, the strong reaction of the market, this did not affect the technical picture of the pair in any way. The flat can continue for as long as you like. 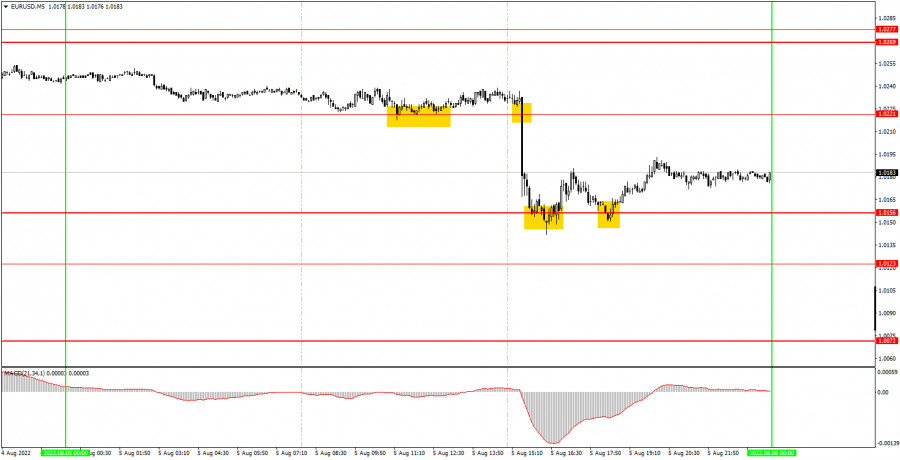 You can clearly on the 5-minute timeframe see what we talked about above. The pair showed a strong surge of volatility only once for half an hour, and the rest of the time it was trading very calmly. Trading signals on Friday were not that much. Novice traders could open longs during the European trading session, when the price rebounded from the level of 1.0221. However, the long position had to be closed manually before the very beginning of the US session, as the data on Nonfarm and unemployment could have provoked a strong market reaction. And so it happened. The sell signal near the level of 1.0221 could not be worked out, since at the time of its formation the price had already gone down by about 60 points. This was followed by a buy signal near the level of 1.0156, but we would not take risks and work it out, since the signal itself was very inaccurate, and the market was still under the impression of Nonfarms. Only the last buy signal turned out to be quite good, but it was formed quite late in time and it would be better to filter it too.

The upward trend has now been canceled on the 30-minute timeframe, and a new downward trend has been formally formed instead. However, by and large, the pair has been trading inside the horizontal channel for several weeks, which we have repeatedly mentioned in our other articles. It is perfectly visible on the 4-hour TF. On the 5-minute TF tomorrow it is recommended to trade at the levels of 1.0072, 1.0123, 1.0156, 1.0221, 1.0269-1.0277, 1.0354. When passing 15 points in the right direction, you should set Stop Loss to breakeven. On Monday, by tradition, not a single important event or publication is planned neither in the US nor in the European Union. However, this is clearly not a problem for the euro, since it has been trading in a horizontal channel for almost a month now.