The first rise in inflation above 10% among the G7 countries on paper should have led to an increase in the yield of UK bonds, followed by a strengthening of the pound. However, everything turned out differently. Debt rates jumped up, but the sterling continued to fall. The lack of support from the debt obligations is a disturbing sign that allows us to say that the GBPUSD has collapsed into the abyss.

As a rule, expectations of an aggressive rate hike by the Central Bank have a positive effect on the exchange rate. You don't need to look far for an example: the US dollar has been appreciating rapidly for most of the year as the potential peak in the federal funds rate from CME derivatives increases. With the pound, a different picture is observed: after the data on the rise in inflation above 10%, the derivatives market considered that the repo rate would reach a maximum of 3.75% within six months. Expectations rose by 100 bps only in August, the yield of British bonds and its differential with US counterparts increased, but the GBPUSD pair continued to dive into the abyss.

Such divergences happen from time to time with the currencies of developing countries. Bond rates are rising as non-residents flee, weakening the currency amid a bleak economic outlook. The pound was previously called the Great British Peso GBP—due to the increased sensitivity to risk, investors had analogies with EM currencies.

The UK economy is extremely weak on its feet. Brexit and the energy crisis allow the Bank of England to predict a recession for five consecutive quarters, pushing investors away from the sterling.

Retail sales statistics serve as confirmation that GDP is going downhill. Their volumes in physical terms do not keep pace with the cost estimate. Inflation forces consumers to pay more for basic necessities, other goods and services, exacerbating the cost-of-living crisis and weighing heavily on the pound.

Dynamics of retail sales in Britain 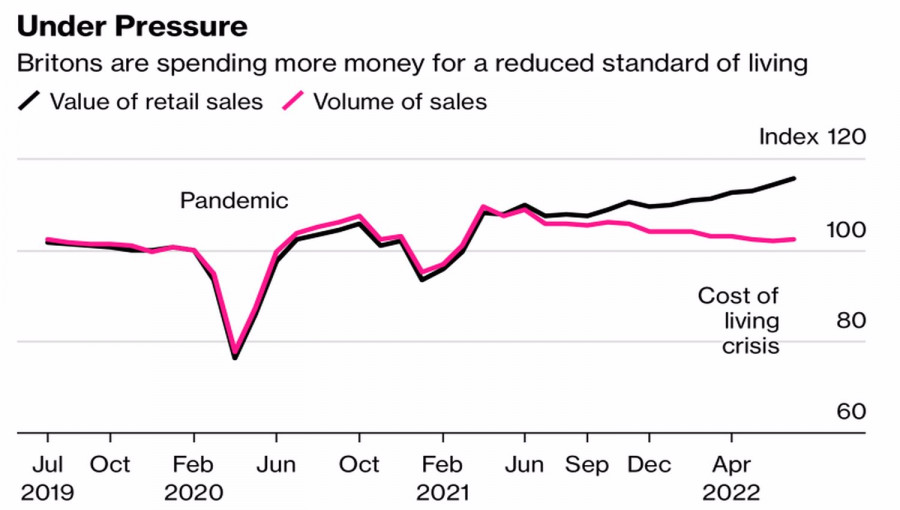 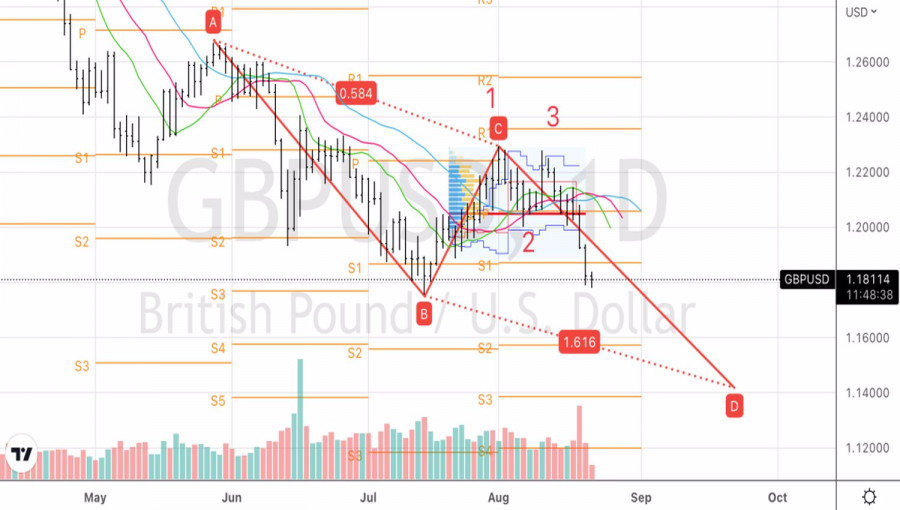 There are always two currencies in any pair, and the fall of the GBPUSD would not have been so rapid if it were not for the return of investor interest in the US dollar. Expectations of Jerome Powell's hawkish rhetoric at the traditional Jackson Hole bankers' meeting in late August could deal a severe blow to US equities, dampen global risk appetite and boost demand for safe-haven assets.

Technically, there is a pronounced "bearish" trend on the GBPUSD daily chart. We hold short positions formed due to the 1-2-3 pattern from the level of 1.205 and periodically build up on pullbacks. The target of the downward movement is the level of 161.8% according to the AB=CD model. It is located at around 1.14.