Forex Analysis & Reviews: Overview of the EUR/USD pair. September 24. Results of the week. The euro currency went underwater because of geopolitics. 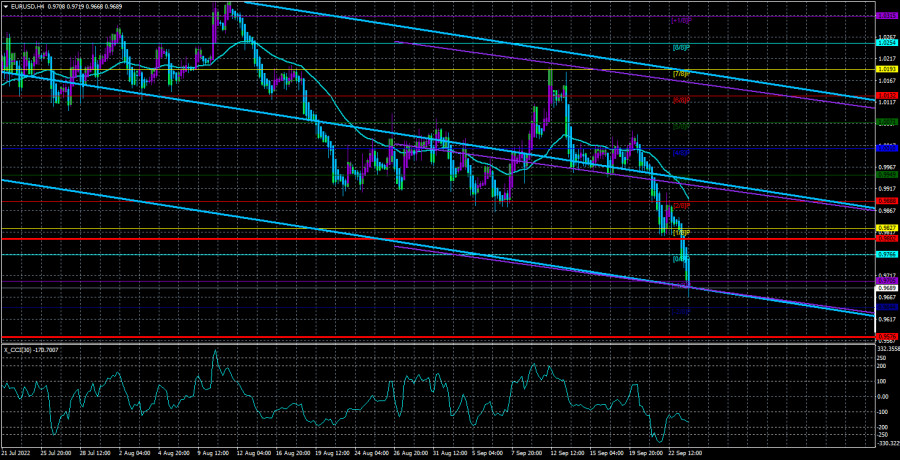 The EUR/USD currency pair fell by another 320 points during the current week. At first glance, it may seem that such a strong downward movement of the pair was quite justified since this week, the Fed held a meeting at which it was decided to raise the rate by 0.75% again. However, from our point of view, the Fed meeting, its results, and even Jerome Powell's speech slightly affected the mood of traders. The key factors in the new fall of the European currency were technical and geopolitical. From the view of "technology," as we have repeatedly said in our previous articles, a global downward trend has been maintained and continues, which has been going on for more than a year and a half. Even based on this factor alone, the fall was much more expected than the growth. The euro still cannot adjust normally; the maximum correction for the entire one-and-a-half-year trend was 400 points. What are 400 points when the whole trend is already 2500 points? 15%? These two points perfectly show that there are no buyers on the market.

Furthermore, there has not been a single signal to buy recently on the senior TF, so it is necessary first of all to study the whole trend. The price overcame the critical line, which to a greater extent decreased and went below the price than the price rose and went above the Kijun-sen. That is, from the point of view of "technology," there was not a single reason to buy the euro currency.

In principle, this week, everyone has already written about the mobilization in Russia. There is nothing new here. If the Kremlin has decided to mobilize, the military conflict in Ukraine will not end in the near future. In February 2022, about 150–200 thousand Russian soldiers entered Ukraine. According to official information, about 300,000 are being mobilized. According to unofficial information, the figure may exceed 1 million. Why do you think so many men are being mobilized? Not to conduct exercises or to guard the border. Naturally, there was an increased anti-risk sentiment in the foreign exchange market immediately. Moreover, traders rushed to buy the dollar with renewed vigor, as their country is very far from the fighting and practically does not depend on Ukraine, Russia, or sanctions. Here are all the reasons for the fall of the euro currency, which can now continue for a very long time.

The Fed's monetary policy is only one of the factors contributing to the fall of the euro.

As for the Fed meeting, it was just another nail in the coffin of the euro currency. The American regulator decided to raise the rate by 0.75% for the third time in a row, and we all see that James Bullard was right when he said that the rate should be raised higher than 4% a few months ago. Now everything is coming to this. If at the beginning of the year the rate increase by a point looked like an emergency measure, now the Fed can raise the rate by this value four times in a row because Jerome Powell declared his readiness to tighten monetary policy at a high pace further. By the end of the year, the rate may increase by another 1.25%, and it is unlikely to decline over the next year. All this gives additional reasons for the dollar to continue to show growth as the ECB continues to catch up. The difference between the ECB and Fed rates is no longer increasing, but it remains significant in itself, which favors the US currency. 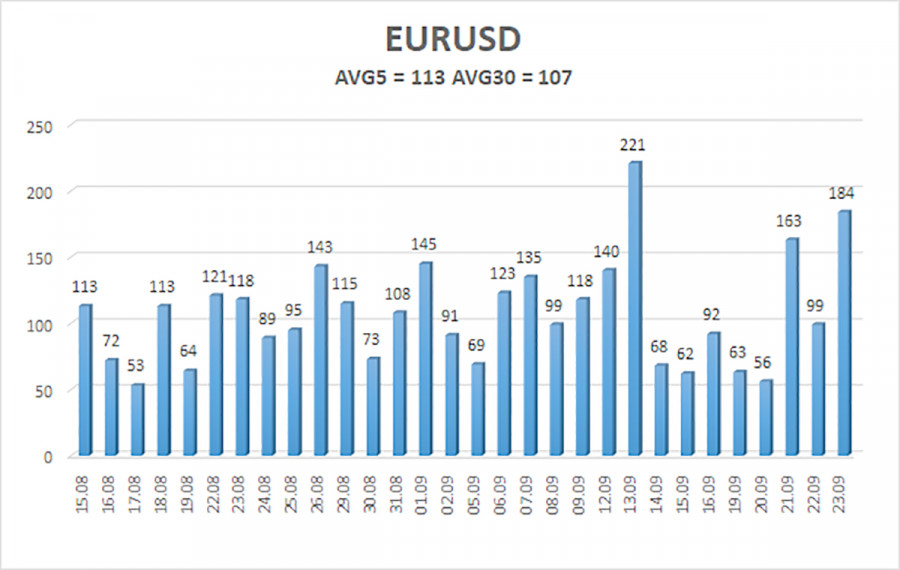 The average volatility of the euro/dollar currency pair over the last five trading days as of September 24 is 113 points and is characterized as "high." Thus, we expect the pair to move between the levels of 0.9576 and 0.9802 on Monday. The upward reversal of the Heiken Ashi indicator signals a round of upward correction.

The EUR/USD pair resumed its downtrend and collapsed on Friday. Thus, it would be best if you stayed in short positions with targets of 0.9644 and 0.9576 until the Heiken Ashi indicator turns up. Purchases will become relevant no earlier than fixing the price above the moving average with goals of 0.9949 and 1.0010.