Despite the chorus of buyers singing an ode to gold, sleeping and seeing it for $2,000 an ounce, it was not possible to escape from the truth. The precious metal collapsed by 4.5% from the levels of November highs due to the reappointment of Jerome Powell as Federal Reserve chairman and the expectations of the "hawkish" rhetoric of the minutes of the last FOMC meeting. Investors believe that the new-old head of the Fede will be able to curb inflation by quickly tapering QE and soon raising the federal funds rate. The withdrawal of monetary stimulus is extremely unpleasant news for the bulls on XAUUSD.

Just like SaxoBank and other companies currently believe that the fall in gold prices is due to profit-taking on longs by hedge funds, I have been insisting for the past two weeks that the rise of the precious metal is purely speculative. Well, XAUUSD quotes cannot grow by leaps and bounds against the background of the USD index's rise to 16-month highs and investors' unwillingness to increase ETF stocks. Yes, the real yield of US Treasury bonds came to the aid of gold, but Powell's second term changed a lot.

The breakeven rate on 5-year bonds has been falling for five consecutive days, which indicates a decline in inflation expectations. Against the background of the rally in the nominal yield of US debt obligations, their real rates are also rising, which deprives the precious metal of a key trump card. According to Swissquote Bank, the "bulls" on XAUUSD will continue to retreat since Treasury bond yields have only one way - up. The reason is the Fed's intention to bring the raging inflation to its knees with the help of an earlier normalization of monetary policy than expected.

However, this theory has its opponents. HSBC believes that the long-term factors of falling debt market rates will keep them at a low level for a long time. These include the aging of the population and the increased debt burden of the United States, which has risen above 100% of GDP for the first time since World War II.

Dynamics of the US debt burden 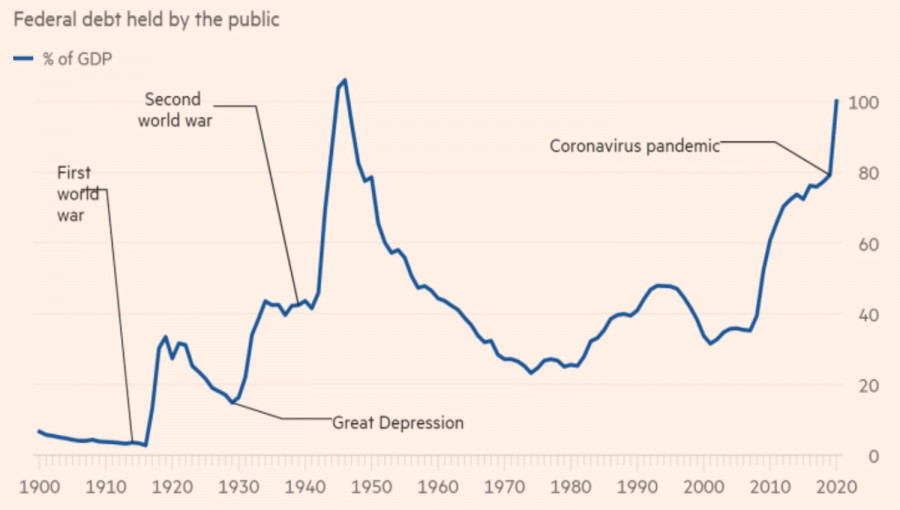 According to the forecasts of the US Census Bureau, the proportion of Americans over the age of 65 will increase from 17% in 2020 to 21% in 2023. Seniors prefer low-risk investments and are likely to support strong demand for Treasuries.

All this is, of course, true. But at this stage of the economic cycle, associated with the return of GDP to the trend and the normalization of the Fed's monetary policy, the likelihood of an increase in rates on 10-year debt to the levels of March highs by 1.75% is significantly higher than the chances of their return to the August bottom by 1.17%. This circumstance creates a headwind for the precious metal.

Technically, the bet on the implementation of the Wolfe Wave pattern won back 100%. The return of gold below $1,850 per ounce allowed us to form shorts with a target of $1,790, which was implemented with a bang. In the future, a successful storming of the fair value at $1,788 and the pivot level at $1,778 will increase the risks of continuing the peak in the direction of $1,748 and $1,718 per ounce. 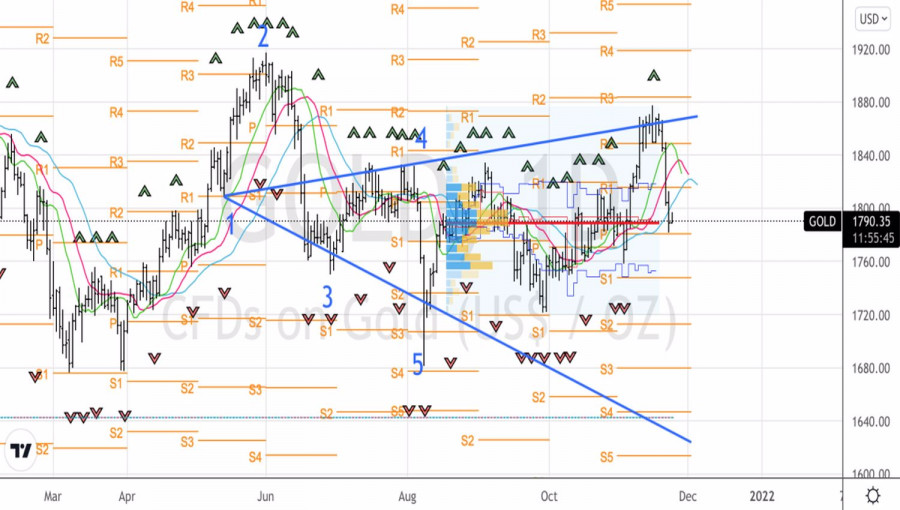