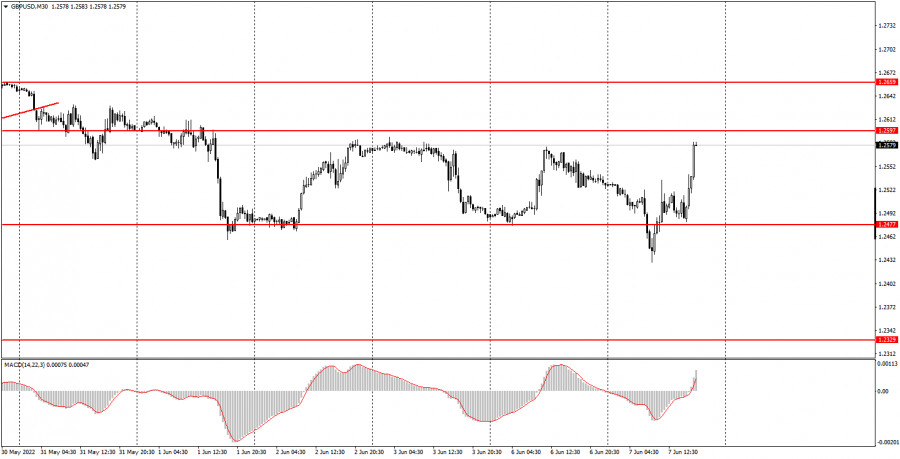 The GBP/USD pair showed a very volatile movement on Tuesday, more than 150 points per day. Formally, there was an exit from the horizontal channel, but the price returned to it very quickly. Thus, at the end of the day, we can also conclude that the technical picture has not changed at all. Moreover, it is rather difficult to say what caused the rather strong movement during the day, if no important macroeconomic report has been published. There were also no important fundamental events, neither in the UK nor in the US. Therefore, it is rather difficult to say why the pair has passed as many as 150 points. Nevertheless, we are inclined to believe that the flat still remains. The movement from the past few days can also be described as a swing. The essence of the matter does not change. The fact remains that there is no trend movement at this time. 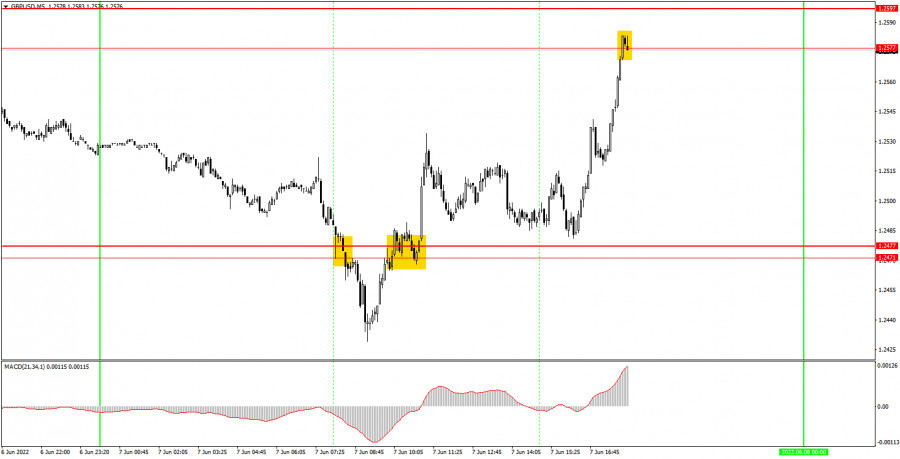 The movement was quite good on the 5-minute timeframe on Friday. Despite the fact that the movement looks flat on the 30-minute time frame, we had a clear trend today on the 5-minute time frame, although the pair often changed direction during the day. However, due to the fact that the levels were chosen correctly, as well as due to their small number, there were few trading signals and all of them were not bad. The first sell signal was formed after overcoming the area of 1.2471-1.2477. After it was formed, the price went down about 30 points, but failed to reach the nearest target level of 1.2371, however, Stop loss could be set to breakeven, so there was no loss on the transaction. The next buy signal was formed when the price settled above the area of 1.2471-1.2477. After that, it went up about 90 points and ideally reached the level of 1.2577, where it was necessary to take profit on the deal. Therefore, novice traders could get 80 points of profit today, which is very good, given the not the best nature of the pair's movement.

The upward trend is formally canceled on the 30-minute timeframe, however, the pair continues to remain close to its local peaks. At this time, the pair is not exactly within the horizontal channel of 1.2471-1.2477, and only the exit from it will signal the end of the flat. Moreover, even overcoming any of the boundaries cannot guarantee the completion of a flat or "swing". The traffic is very strange right now. On the 5-minute TF it is recommended to trade at the levels 1.2371, 1.2471-1.2477, 1.2577, 1.2597-1.2616, 1.2659-1.2674. When the price passes after opening a deal in the right direction for 20 points, Stop Loss should be set to breakeven. The UK is set to publish only not the most important index of business activity in the construction industry. Meanwhile, the calendar of news and events is completely empty in the US. Thus, novice traders will again have nothing to react to during the day. However, today has shown that volatility, even in this state of affairs, can be very high.