The Moving Average indicator (MA) shows the average price for a certain period of time. This indicator is calculated by mathematical averaging of the asset price for the given period. As the price dynamics change, its average reading either increases or declines.

Trading on moving averages enables investors to make decisions in accordance with the current developments in the market. In other words, they buy after prices hit a bottom and sell after quotes make highs. The MA method can also be applied to other indicators. The correlation is the same: if an indicator moves above the MA reading, it is likely to continue rising; and if it goes below the MA reading, it will dip lower. 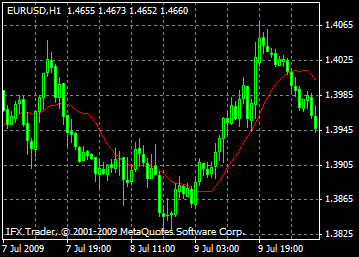 The Simple, or Arithmetic, moving average is calculated by adding together closing prices of certain periods, 12 hours for example, and dividing the sum by the number of periods.

N — the number of periods.

The Exponential moving average is calculated by adding a certain part of the current closing price to the previous MA reading. As for the EMA, closing prices have bigger weight coefficient. Here is the formula for calculation of the EMA:

EMA (i-1) — the MA reading of the previous period;

The second and subsequent readings are calculated in the following way:

SUM1 — the sum of closing prices of N periods that start from the previous bar;

SMMA (i - 1) — the smoothed moving average of the previous bar;

SMMA (i) — the smoothed moving average of the current bar (except the first one);

CLOSE (i) — the current closing price;

In the Linear Weighted Moving Average the latest data in the set is assigned a bigger weight coefficient, while the earlier prices have a smaller weight. The LWMA is calculated by multiplying each of the closing prices by a certain weight coefficient.