Forex Analysis & Reviews: The euro didn't get ahead of the curve

Why is the euro rising? It would seem that the EURUSD bulls have plenty of obstacles. The federal funds rate is higher than the ECB deposit rate. The U.S. economy is clearly stronger than the European economy, which has quite likely already plunged into recession. Investor fears are still very high. The armed conflict in Ukraine is far from over, the pandemic in China has not been defeated, monetary tightening by the Federal Reserve continues and is weighing on US stock indices.

In fact, markets are rising on expectations. There is always some narrative that investors are reeling from. Right now the narrative is that U.S. inflation will continue to slow down, the Fed will bring rates to 5%, and then take a long pause. However, if we go back to the summer, the main idea was a recession in the eurozone due to its proximity to the war zone and the energy crisis. The assumption was that the European Central Bank would not be able to raise borrowing costs even higher under such conditions.

By the end of 2022, it was clear that the EU was well prepared for winter. It had built up its gas reserves, which, coupled with warm weather, contributed to a drop in the price of blue fuel and a more optimistic picture of the economy of the currency bloc. The recession now appears shallow and short-lived. The ECB can raise rates with a clear conscience. At the same time, a number of comments from Governing Council officials, including chief economist Philip Lane, convinced markets that the cost of borrowing will rise by 50 bps.

Dynamics of expectations for ECB deposit rate increase in December 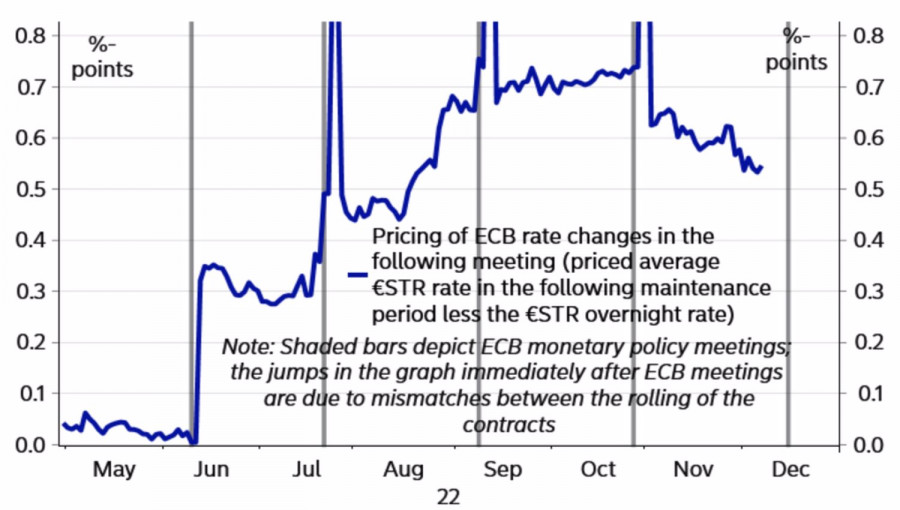 In fact, a single report of slowing European inflation in November does not mean that consumer prices have passed their peak. In addition, a series of strong macroeconomic indicators for the euro area makes the ECB feel confident. The currency bloc's economy is taking a hit from higher rates, so why not keep it up? For example, Bank of Slovakia President Peter Kazimir believes that borrowing costs can be raised by 75 bps in December. 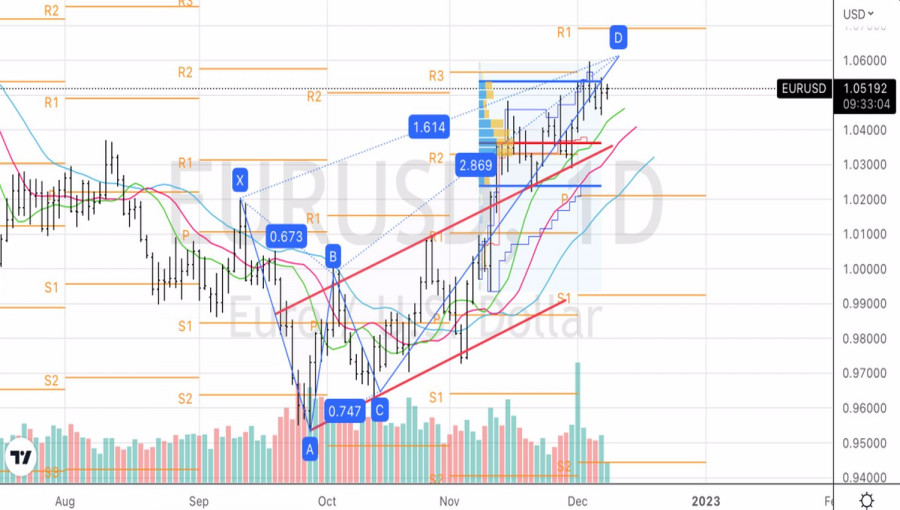 Thus, the reasons for the EURUSD rally are clear. Moreover, due to the undervalued expectations for the deposit rate, the pair is able to go even higher. What can make it turn back? First of all, an unexpected acceleration of inflation in the US. And of course, the Fed's dissatisfaction with the weakening of financial conditions. That is why the euro bulls are in no hurry to add money to long positions. Why climb ahead? Isn't it better to wait for the important events of the week by December 16, put aside fears and open new longs with a clear conscience? The result of such passivity is consolidation.

Technically, the upper limit of the fair value range at 1.054 and the pivot level at 1.0565 prevents the price from reaching the target at 161.8% according to the Crab pattern. Even if these resistances are overcome, prior to the release of U.S. inflation statistics, EURUSD risks backtracking. Therefore, it is better to use the pullback for short-term selling.