Forex Analysis & Reviews: Overview of the EUR/USD pair. September 23. The Fed raised the rate by 0.75% and promised to raise it by another 1.25%. 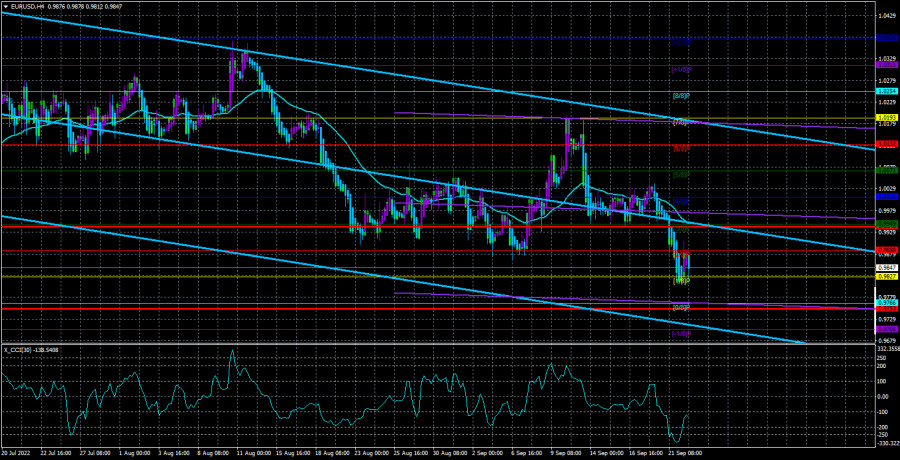 The EUR/USD currency pair continued to fall during the evening of the third trading day of the week (the period we did not consider in the last article). The market reaction to the results of the Fed meeting on Wednesday evening could have been different. Given that the euro currency has been falling for a very long time, we were counting on the growth of this currency if the Fed did not immediately raise the rate by 1.00%. However, as usual, the market has drawn its conclusions. Thus, at the moment, the pair is again located below the moving average line, maintaining the overall downward trend and a long-term downward trend. The lower the pair falls, the less the market wants to sell the euro currency. Every day, traders struggle with themselves since the current levels no longer look attractive for new sales (20-year lows), but at the same time, what else to do with a tool that only does that fall?

We could even assume that the market has been preparing for an upward reversal in recent weeks. After all, the euro cannot fall forever, the Fed will not raise the key rate forever, and the geopolitics at that time smoothed a little. But at the beginning of this week, it became known about the partial mobilization, according to which about 300,000 men will be officially called up. And yesterday, it became known that, in reality, we can talk about 1 million men (according to unofficial information). Naturally, several such men are being called not to protect the state border of the Russian Federation but, probably, to be gradually sent to Ukraine. Thus, the geopolitical conflict between Ukraine and Russia may persist for a long time, with all the ensuing consequences for Ukraine, Russia, the European Union, the UK, and risky currencies and assets. That is why we believe the chances of the euro's growth disappeared a couple of days ago.

Jerome Powell shone with platitudes, but he also made one important statement.

As we said in the previous article, the most important thing will not be the results of the Fed meeting but the market reaction and Powell's speech. If we remove all the "water" from Powell's speech (of which there was plenty), then we can understand that the Fed will raise the key rate as fast as possible this year by 0.75% once every month and a half. The "dot plot" chart evidences this: the rate should rise to 4.4% by the end of this year and to 4.6% over the next. Maybe at some point, the Fed will begin to slow down the pace of monetary policy tightening (as Powell stated), but it is unlikely to expect such a development in the coming months. Plus, the head of the Fed himself clearly said that his department would continue to monitor the inflation rate closely. Consequently, if the consumer price index declines slowly, the rate will rise faster and stronger.

So far, we believe that the forecasts of James Bullard, who spoke about 4.5% a few months ago, are 100% coming true. Thus, all this time, until the rate rises to at least 4%, the US currency can continue to remain "on the horse." Then everything will depend on how aggressive the ECB is. After all, the European regulator can raise its rate, for example, to 3% and declare that the "banquet is over." Then the difference between the rates will remain significant, limiting any possible growth of the European currency. However, it is too early to even talk about this because first, you must wait for the announcement of the end of the US rate hike cycle. Powell also noted that he knows the harm to the economy, businesses, and households. Still, the Fed has no other way – it is necessary to reduce inflation to the target level by any means. We believe the euro may continue to fall in the next few months. The only thing is that it may slow down, but we do not see any grounds for growth, considering geopolitics. 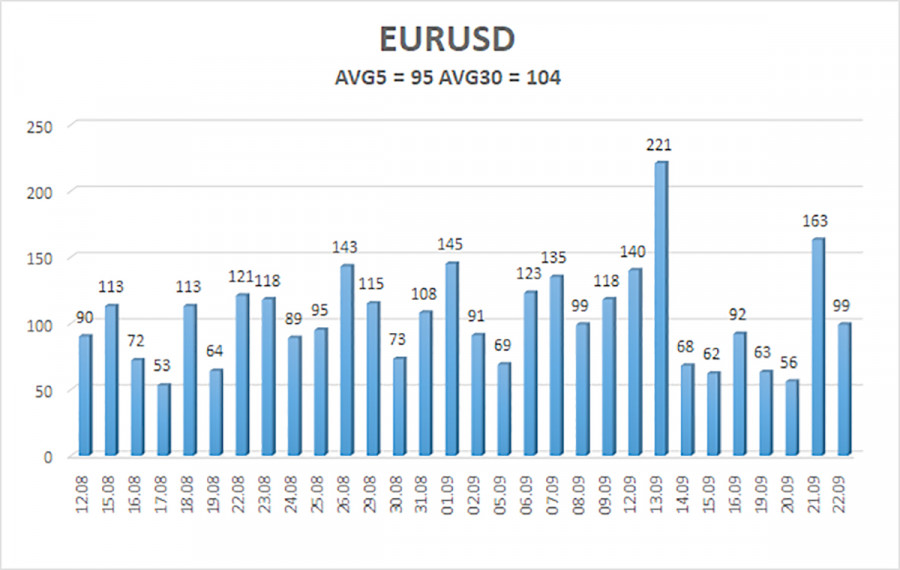 The average volatility of the euro/dollar currency pair over the last five trading days as of September 23 is 95 points and is characterized as "high." Thus, we expect the pair to move today between 0.9753 and 0.9943. The reversal of the Heiken Ashi indicator will signal the resumption of the downward movement.

The EUR/USD pair resumed its downward trend and overcame the 0.9888 level. Thus, now we should consider new short positions with targets of 0.9766 and 0.9753 after the reversal of the Heiken Ashi indicator down. Purchases will become relevant no earlier than fixing the price above the moving average with goals of 1.0010 and 1.0071.

Despite the US dollar's overall market weakness this week, the Australian dollar plunged when paired with the US currency. So, on December 6, the day before the RBA's December meeting

The euro is being substituted for sales again

EUR/USD The euro has allowed sellers to profit several times, displaying a local maximum before reversing course. The euro is attempting to pass the 1.0600 level once more, and sales

EUR/USD. Traders are plagued by doubts as the pair oscillates near the 1.0500 level.

Against a nearly empty economic calendar, the EUR/USD pair is fluctuating near the 1.0500 level. Both buyers and sellers are uneasy in the vicinity of the fifth figure

EURUSD: Bulls went for a new attack amid positive German and eurozone statistics

The dollar has strengthened since the beginning of this week, and during today's Asian trading session, the dollar index (DXY) reached a local 4-day high of 105.80. At the beginning

The euro and other risky assets, including the British pound, are slowly recovering amid news that China finally abandoned its Covid Zero policy, loosening a number of restrictions

The gold market, which marked a solid breakout of last month's two-year lows, seems comfortable around $1,780 an ounce. However, gold prices have risen nearly $200 since early November

Euro rose on Tuesday because of rumors that the ECB is seriously considering how to get rid of the €5 trillion bond balance sheet as quickly as possible. However, this

Gold jumped almost $200 an ounce from the levels of November lows, and in anticipation of important statistics on US inflation and the Fed meeting, buyers decided to fix part

Markets are troubled by the growing fears that the Fed will change its mind on interest rates due to the recent positive data on the US economy. They worry that