Russian President Vladimir Putin has criticized the monopoly in global financial payment systems and called for the creation of an independent and blockchain-based settlement network, speaking at the international AI Journey Conference in Moscow.

At an event organized by Sberbank, Russia's largest bank and the government's main lender, stated:

"Digital currencies and Blockchain technology can be used to create a new system of international settlements that will be much more convenient, completely safe for its users and, most importantly, will not be dependent on banks or third-country interference. I am convinced that something like this will definitely be created and it will develop, because no one likes the diktat of monopolists, which harms all parties, including the monopolists themselves.

"The existing system of international payments is expensive, the system of its correspondent accounts and regulations are controlled by a narrow club of states and financial groups," the Russian president noted.

The BTC/USD pair has made a new yearly low at the level of $15,477 as the bearish pressure is still strong. There is no indication of the down trend on Bitcoin to terminate or reverse, so the next target for bears is seen at the level of $13,563 (2019 high). The bulls bounce above the local trend line resistance, however, there is no follow up with this move up so far as the market keeps trading back inside the old, narrow range. The next technical resistance is seen at $16,793. The momentum bounce from the extremely oversold market conditions was very short-lived and now the indicator is back under the level of fifty. 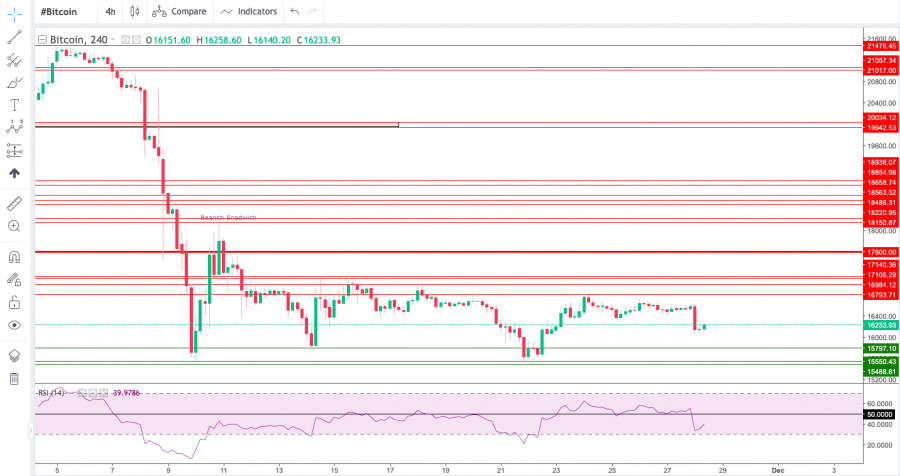