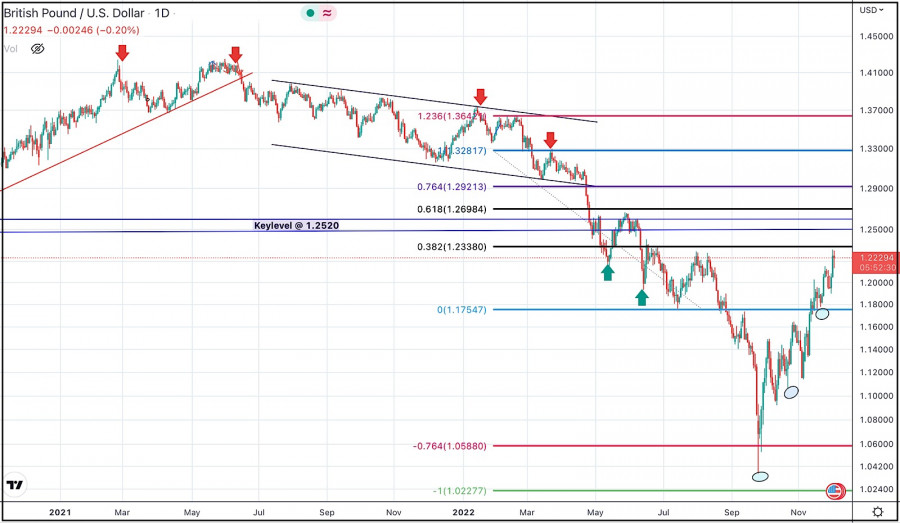 Previously, the GBP/USD pair remained under bearish pressure to challenge the lower limit of the channel around 1.3000 which failed to hold prices above.

Shortly after, a new daily low was established around 1.2150 which was bypassed few days after.

However, considerable support zone existed around 1.1850-1.1900 which has prevented further bearish decline for sometime.

However, as bullish momentum started to fade away, more bearish visits were expected to challenge these historical low levels.

Shortly after, Quick bearish decline was executed towards 1.1075 & 1.0860 where significant Fibonacci Expansion levels were located.

Based on the upcoming price action and the next weekly candlestick closure, the next target level for the GBP/USD pair can be determined.

Further bullish continuation above 1.1765 was expected in previous articles specially after the newly-established ascending bottoms around 1.1150 and 1.1750 remain defended by the bulls.

The next key-level to be visited is located around 1.2340. That's why, further bullish advancement was expected if sufficient bullish momentum is maintained.

on the other hand, another bearish pullback towards the price levels of 1.1200 and 1.1000 should be expected for another long-term BUY Entry with initial target around 1.1500.

Let's take a look at the technical picture of USD/JPY, EUR/USD

Description : Looking at the H4 chart, my overall bias for USDCAD is bearish as there is a descending trend line, Looking for a sell entry at 1.34628 where below

Description : Looking at the H4 chart, my overall bias for ETHUSD is bullish due to the current price crossing above the Ichimoku cloud, indicating a bullish market. Looking

Analysis of Gold for February 08,.2023 - Breakout of the trading range to the upside and potential for the growth

Technical analysis: Gold has been trading upside this morning and I found the breakout of the symmetrical triangle in the background, which is good sign for the further upside movement

Technical analysis: USD/JPY has been trading downside and I found the breakout of the symmetrical triangle in the background, which is good sign for the furtehr downside movement. Trading recommendation

Technical Analysis of GBP/USD for February 8, 2023

Technical Market Outlook: The GBP/USD pair had made Bullish Engulfing candlestick pattern at the level of 1.1960 on the H4 time frame chart and now is trying to break above

Technical Analysis of EUR/USD for February 8, 2023

The pound-dollar pair may move upward from the level of 1.2044 (closing of yesterday's daily candle) to 1.2074, the 23.6% pullback level (yellow dotted line). In the case of testing