Forex Analysis & Reviews: Forecast and trading signals for EUR/USD for August 8. COT report. Detailed analysis of the pair's movement and trade deals. Euro lost ground after the Nonfarm, but so far it is not critical. 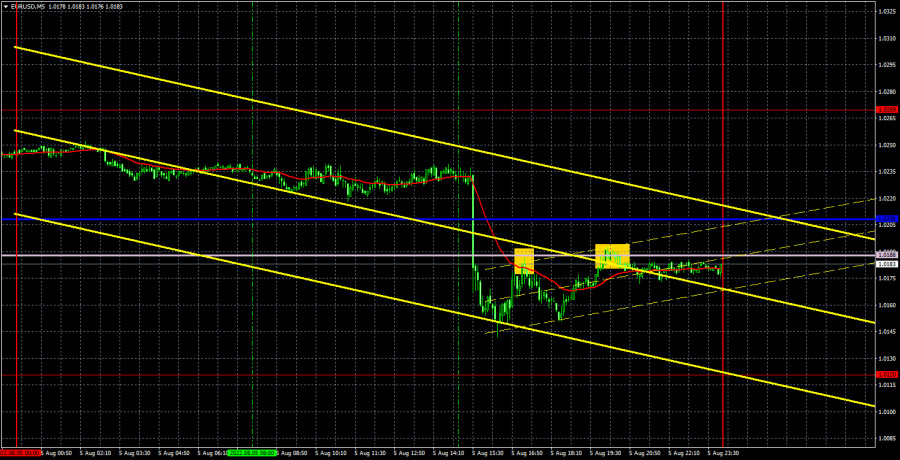 Last Friday, the EUR/USD pair collapsed by 90 points at once, and the rest of the time it was trading quite calmly. However, even a drop of 90 points within an hour does not really matter for the current technical picture, since it happened within the horizontal channel of 1.0120-1.0269, which we have been writing about in recent weeks in all articles. Thus, the US Nonfarm data turned out to be very strong, we personally did not expect such a high value of the report; the unemployment rate has fallen further and now stands at 3.5%; however, all these statistics do not really matter for the euro/dollar pair, since the flat has been persisting for almost a month. Naturally, important macroeconomic statistics are worked out by the market, but traders cannot or do not want to restore the trend movement yet. Therefore, we still believe that the euro does not have the necessary grounds for growth, so the long-term downward trend will resume sooner or later. As for the horizontal channel, most likely the price will leave it at the most unexpected moment, when it will not be preceded by any important event.

In fact, the movement was observed only in the US trading session. First, the quotes fell by almost 100 points, and then a gradual recovery began. As a result, we did not even begin to select sell signals near the Kijun-sen and Senkou Span B lines, since in any case it was impossible to work them out in time. The pair bounced twice from the Senkou Span B line and it was possible to try to work out the first rebound. However, the short position was closed by Stop Loss at breakeven. The second sell signal was formed too late to be traded. 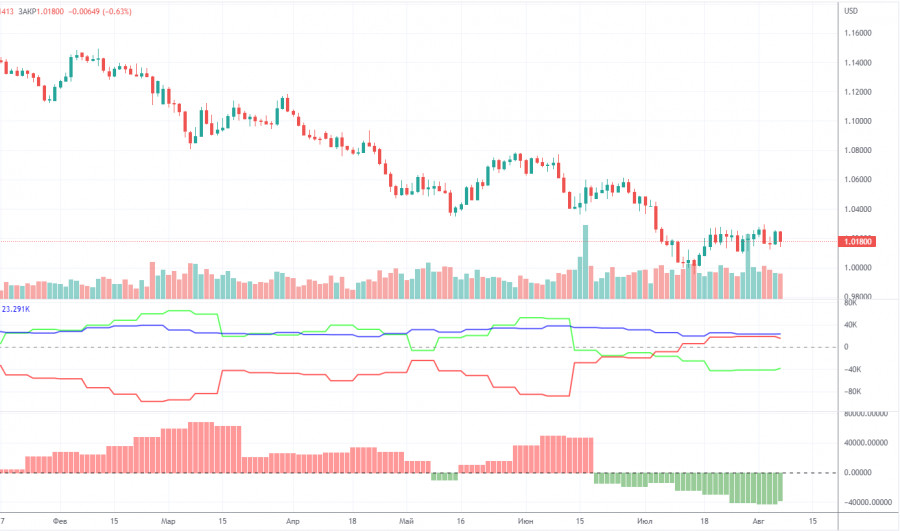 Forecast and trading signals for GBP/USD on August 8. Detailed analysis of the movement of the pair and trading transactions. 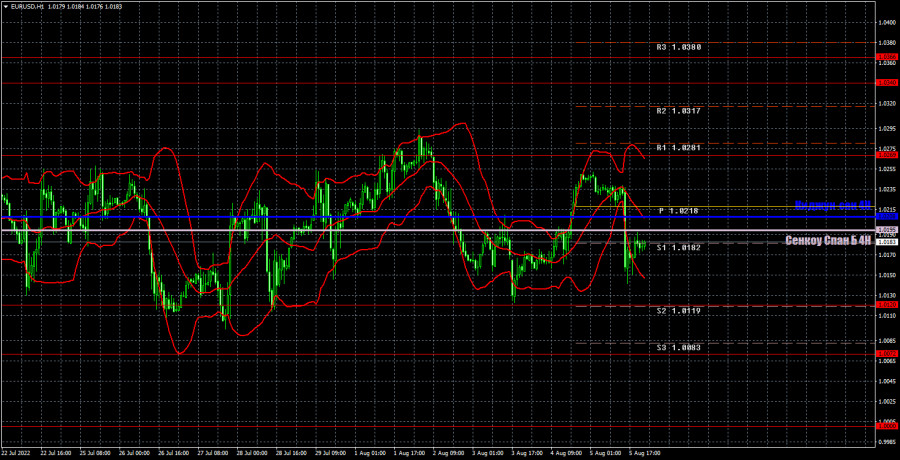 The pair continues to trade between the levels of 1.0120 and 1.0269 on the hourly timeframe. Thus, the flat remains and can continue for as long as you like. The Ichimoku indicator lines are not strong at the moment, so false signals may form around them. We highlight the following levels for trading on Monday - 1.0000, 1.0072, 1.0120, 1.0269, 1.0340-1.0366, 1.0485, as well as Senkou Span B (1.0195) and Kijun-sen lines (1.0208). Ichimoku indicator lines can move during the day, which should be taken into account when determining trading signals. There are also secondary support and resistance levels, but no signals are formed near them. Signals can be "rebounds" and "breakthrough" extreme levels and lines. Do not forget about placing a Stop Loss order at breakeven if the price has gone in the right direction for 15 points. This will protect you against possible losses if the signal turns out to be false. No important publication or fundamental event planned in the European Union and the United States on August 8. There will definitely be nothing for traders to react during the day. However, this does not mean that the pair will stand in one place. It can continue to move very volatile within the horizontal channel.

How to trade EUR/USD on February 3. Simple trading tips and analysis for beginners

GBP/USD: trading plan for the American session on February 2 (analysis of morning deals)

You require the following to open long positions on the GBP/USD: I focused on the level of 1.2347 in my morning forecast and suggested making decisions about joining the market

EUR/USD continues to develop an upward trend, trading near the 1.0985 mark and steadily rising towards the 1.1130 key resistance level (200 EMA on the weekly chart), the breakout

Yesterday, the GBP/USD currency pair continued to trade below the moving average line. As a result, the "feat of the euro" was not repeated, but the British pound was also