Forex Analysis & Reviews: EUR/USD analysis on September 28. The dollar continues to grow after the statements of FOMC members. 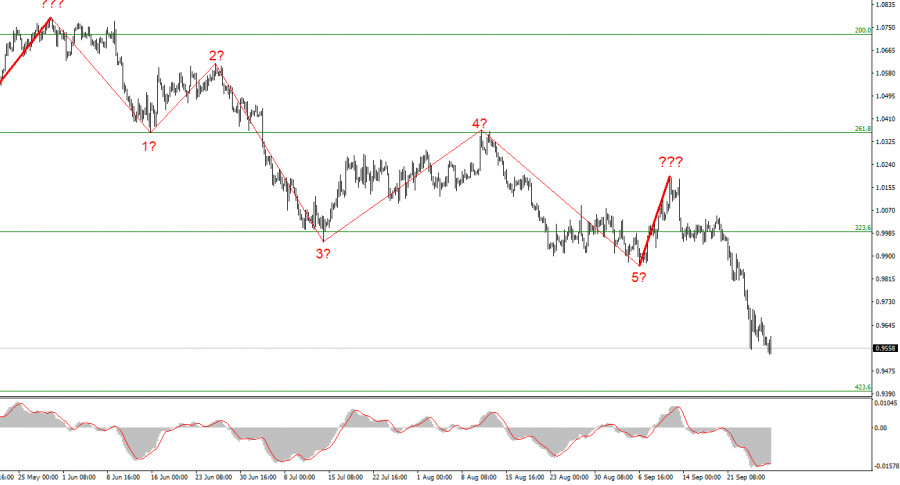 The wave marking of the 4-hour chart for the euro/dollar instrument still does not require adjustments, but it is undoubtedly becoming more complicated. We saw the completion of the construction of the next five-wave impulse descending wave structure, then one correction wave upward, after which the low wave 5 was updated. These movements allow me to conclude that the pattern of five months ago was repeated when the 5-wave structure down was completed in the same way, one wave up, and we saw five more waves down. There is no question of any classical wave structure (5 trend waves, 3 correction waves) right now. The news background is such that the market even builds single corrective waves with great reluctance. Thus, in such circumstances, I cannot predict the end of the downward trend segment. We can still observe for a very long time the picture of "a strong wave down - a weak corrective wave up." The goals of the downward trend segment, which has been complicated and lengthened many times, can be found up to 90 figures, and maybe even lower.

Powell and the company announced their readiness to continue raising rates.

The euro/dollar instrument fell by 30 basis points on Wednesday. This is not so much if, at the current time, the euro did not continue to update its lows for 20 years. Each new decline in the quotes of the European currency is a new anti–record. Thus, from my point of view, the market must continue reducing demand for the euro even when there seems to be nowhere to fall lower. Let me remind you that the current week began with a collapse. On Tuesday, the situation stabilized a little, and on Wednesday, it became clear that the market continued to pressure the euro. Perhaps the speeches of the FOMC representatives played a role; who all declared the need to continue to "cool" the American economy and raise the rate to return inflation to the target level of 2%. I believe that the new "hawkish" statements by Rafael Bostic, James Bullard, Jerome Powell, and Neil Kashkari could cause a new increase in demand for the dollar. However, why then, at the same time, similar statements by Christine Lagarde were ignored?

There can be two versions. Either the market is not interested in the comments of central bank representatives at all right now, as it is clear to everyone that without them – rates will rise. Or now, much more important, significant, and large-scale factors are working against the euro. From my point of view, the euro and the pound continue to decline due to the events of September 21 and the upcoming events of September 30. Let me remind you that on September 21, mobilization was announced in the Russian Federation. On September 30, Vladimir Putin may announce the annexation of the occupied territories to Russia based on referendums. Of course, these events do not positively affect the geopolitical situation in the world. Escalation of the conflict – that's what it's called. And since the conflict is worsening, the market understands this very well. As a result, they prefer to buy the currency that, in their opinion, is the safest in the current circumstances. After all, if you pay attention, the euro and the pound have only been declining since February 24. 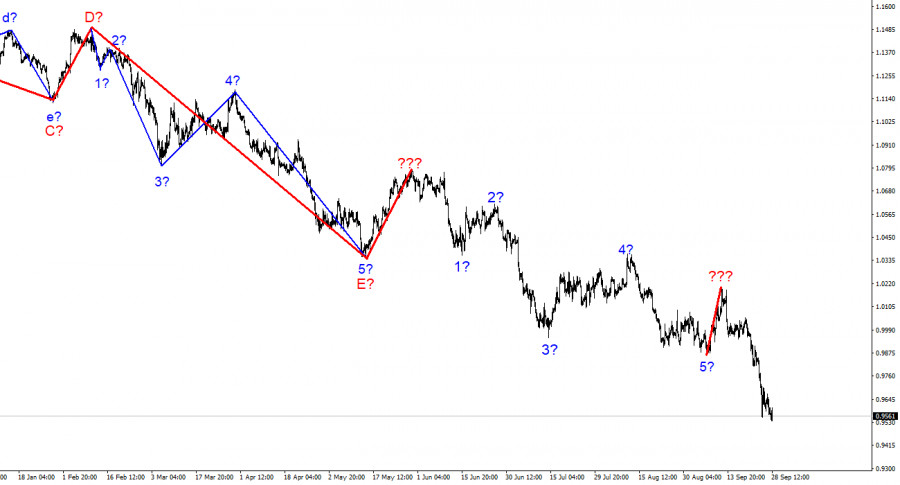 Based on the analysis, I conclude that the construction of the downward trend section continues but can end at any moment. At this time, the instrument continues to decline, so I advise careful sales with targets near the estimated mark of 0.9397, equating to 423.6% Fibonacci. I urge caution, as it is unclear how much longer the decline of the euro currency will continue.

At the higher wave scale, the wave marking of the descending trend segment becomes noticeably more complicated and lengthens. It can take on almost any length, so I think it's best to isolate the three and five-wave standard structures from the overall picture and work on them. One of these five waves can be just about completed now, and the new one has begun its construction.