Forex Analysis & Reviews: How to trade EUR/USD on November 28, 2022. Simple trading tips and analysis for beginners 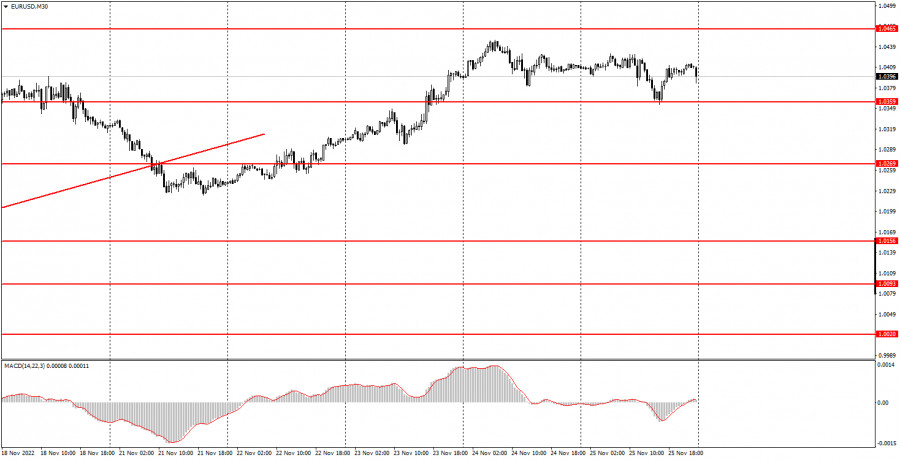 The EUR/USD trade was very boring on Friday. There were no important events or reports in the EU or the US. The market could not react to anything, and it seemed that the movement was more like a flat. To be honest, the whole week turned out to be very boring from a fundamental and macroeconomic perspective. Basically, traders only had some basis for certain trading decisions on Wednesday. However, most of the macroeconomic reports of that day were, to put it mildly, unimportant and were not really interesting. So traders had nothing to react to during the week. As a result, the euro managed to show growth, which again raises a lot of questions. I mentioned that it is possible to find a reason for this or that movement, but if the euro had two reasons to rise, and five reasons to fall, then is it reasonable to say that the euro is growing? It has crossed the uptrend line, but now the pair is more inclined to grow. The formal downtrend is not yet canceled, because the price has yet to cross the last local high near the level of 1.0465. Therefore, we are still waiting for a significant downward correction. 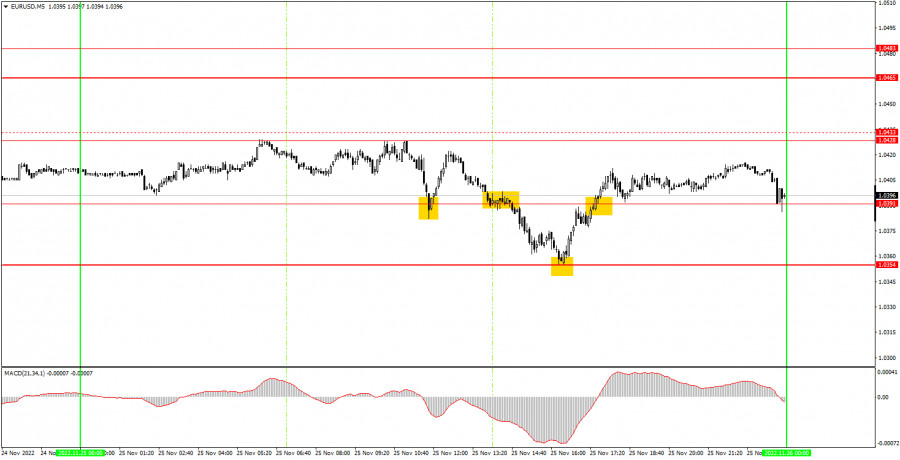 Several trading signals were formed on the 5-minute chart. First, the price rebounded from the level of 1.0391 and managed to go up about 20 pips. Therefore, we managed to put Stop Loss to Breakeven on this trade, but no more than that. The price failed to reach the target level. Then a sell signal was formed near the same level (1.0391). In this case, the price was able to fall to the target level of 1.0354, and beginners gained around 15-20 pips using this signal. The rebound from 1.0354 was not bad, afterwards the price started a new spiral of upward movement and crossed the level of 1.0391, where it remained until the end of trading. Therefore, the long position had to be closed manually, and the profit was about 35 pips. As a result, the day ended with 50 pips of profit, which is very good for an absolutely "empty" Friday.

The uptrend has been canceled on the 30-minute time frame, just as we predicted a week ago. However, the pair is struggling to continue its decline. I still think that both macroeconomic and fundamental backgrounds have been favorable for the euro in the past few days and weeks. That is why we keep waiting for the downward correction, as the uptrend has not officially resumed yet. On the 5-minute chart tomorrow, it is recommended to trade at the levels of 1.0156, 1.0221, 1.0269-1.0277, 1.0354, 1.0391, 1.0428, 1.0465, 1.0483, 1.0535, 1.0582. As soon as the price passes 15 pips in the right direction, you should set a Stop Loss to breakeven. On Monday, European Central bank President Christine Lagarde will give another speech, which might be interesting. However, we don't think Lagarde's rhetoric has changed in recent weeks, so she probably won't say anything new. There is nothing of interest scheduled for the US.