Yesterday, EUR/USD generated a few signals for market entry. Let's analyze the 5-minuts chart and try to figure out what has actually happened. In the previous article, I turned your attention to the level of 1.0421 and recommended making trading decisions with this level in focus. The euro fell due to weak manufacturing PMIs for November. So, the currency pair broke and made the opposite test of 1.0421 which created a sell signal. Unfortunately, this price action didn't trigger a large sell-off and traders had to fix losses. In the second half of the day, the technical picture was revised. In the course of EUR's growth and a false breakout at about 1.0513, the instrument generated two sell signals. The first signal didn't bring decent profit but with the second attempt, the currency pair dropped by more than 40 pips. 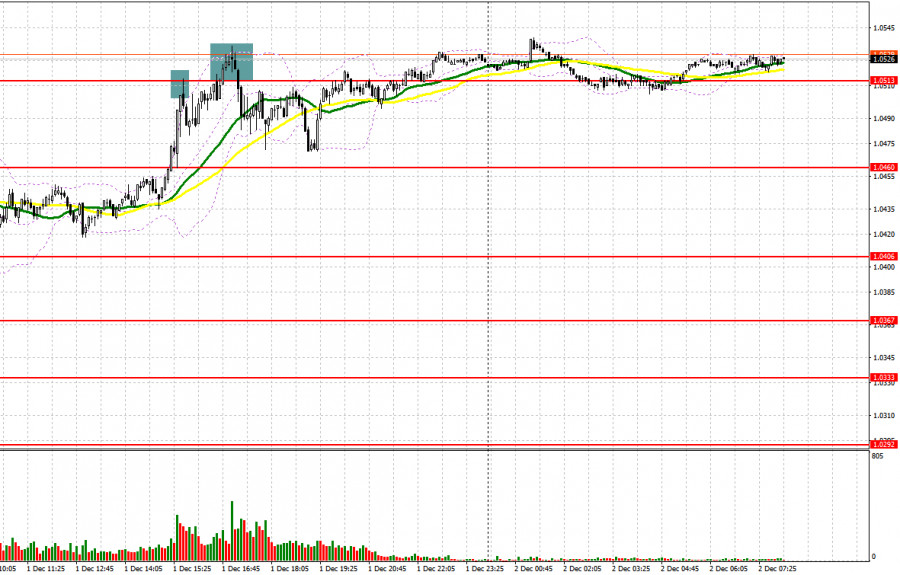 What is needed to open long positions on EUR/USD

A weak ISM manufacturing PMI led to another sell-off of the euro. Traders were brave to accumulate long positions on risky assets in anticipation that the next trading day could enable a steeper fall in the US dollar. This could happen in the second half of the day. Now let's look at the economic calendar. Higher volatility in the European session could be fueled by the report on Germany's trade balance as well as factory inflation data for the Eurozone. A decline in the EU PPI could cap the upside potential of EUR/USD. Like it was yesterday, the currency pair could have a downward correction. The euro buyers could take advantage of the correction ahead of the crucial report on the US labor market. In case EUR drops due to the weak reports from Europe, only a false breakout of the nearest support at 1.0498 will produce a buy signal and push the price upwards back to 1.0536 which the bulls are now fighting for.

A breakout and a downward test of this level will provide another market entry point for more long positions, aiming to update a one-month high at about 1.0568. A breakout of this level will activate stop losses of the bears and will create an extra buy signal under the scenario of a spike to 1.0604 where I recommend profit-taking.

In case EUR/USD declines and the buyers are inactive at 1.0498, the currency pair will come under selling pressure which will hardly spook the euro buyers at the beginning of the month. A breakout of 1.0498 will enable a move downwards to the next support at 1.0452 where sellers' moving averages are passing. This level will help a lot to form the lower border of the ascending channel. I reckon large market players will enter the market in this area. I would recommend opening long positions there only on the condition of a false breakout. We could buy EUR/USD immediately at a drop from 1.0395 or lower at nearly 1.0333, bearing in mind a 30-35-pips upward correction intraday.

What is needed to open short positions on EUR/USD

The euro sellers pushed hard but their efforts were to no avail. Today, nothing could happen to help the bears take the lead. Hence, I don't rely on opening short positions. In the first half of the day, a sell signal with the aim of a correction to 1.0498 could be generated on the following conditions: a failed attempt to climb above 1.0536, to update the intraday high, and to make a false breakout accompanied by divergence on the MACD indicator. Dovish remarks by Joachim Nagel, the Bundesbank President and Member of the ECB Governing Council, might escalate pressure on the euro. A breakout and the opposite test of 1.0498 could create an extra point for the market entry with short positions, bearing in mind the price decline to almost 1.0452, the support formed yesterday. Once the price settles below this level, the euro might come under serious pressure at the end of the week. Thus, the instrument might go through a deeper correction to 1.0395 where I recommend profit-taking. The most downward target is seen at 1.0333. The test of this level will cancel the bull market. So, the sellers will be able to celebrate their victory under current conditions. In case EUR/USD moves up during the European session and the bears are inactive at 1.0536, this will set the stage for a spike to a higher level of 1.0568.

I would also recommend opening short positions there only in case the price fails to settle at highs. We could also sell EUR/USD immediately at a bounce off the high at 1.0604 or higher from 1.0640, bearing in mind a downward correction of 30-35 pips intraday. 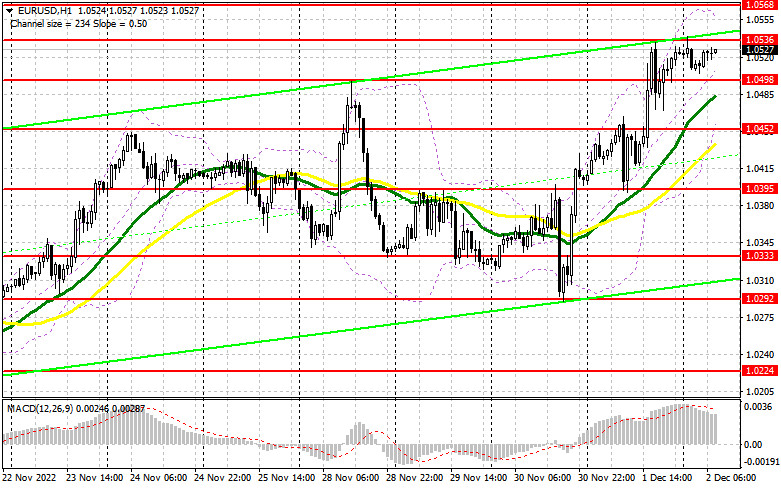 The COT report from November 22 logged an increase in long positions and a sharp drop in short ones. Statements made by the Federal Reserve allowed the euro buyers to hold the upper hand in the market, as traders once again found evidence that the committee would change its aggressive approach to the future of US interest rates. Later today, market participants are alert to crucial statistics on the US GDP and the labor market. This information can, if not completely, then practically put everything in its place - only inflation data for November will be missing. The reduction in employment and a rising jobless rate will greatly weaken the US dollar against risky assets, including the euro. Importantly, the market will be also riveted to the statements made by the chairman of the Federal Reserve in the following press conference. If he comes up with hawkish remarks, it will be another reason to short the dollar, as further sharp rate hikes will push the economy into a bigger recession.

According to the last COT report, long non-commercial positions rose by 229 to 239,598, while short non-commercial positions fell sharply by 10,217 to 116,486. By the end of the week, the total non-commercial net position increased and amounted to 123,112 against 112,666. This indicates that investors continue to take advantage of the situation, buying the undervalued euro even above parity, as well as accumulate long positions as they foresee the resolution of the crisis and the recovery of EUR/USD in the long term. The currency pair closed lower last week at 1.0315 against 1.0390 a week ago.

The currency pair is trading above the 30 and 50 daily moving averages. It indicates that the buyers are holding the upper hand.

If EUR/USD goes up, the indicator's upper border at 1.0550 will serve as resistance. Otherwise, if the currency pair declines, the lower border at nearly 1.0452 will act as support.

EUR/USD continued to grow quietly during the whole third trading day of the week. Naturally, late in the evening, when the results of the US central bank meeting were announced

When to open long positions on GBP/USD: In the morning, there were no entry points. Now, let's look at the 5-minute chart and figure out what actually happened. The pair

In my morning review, I mentioned the level of 1.0874 as a possible entry point. Let's see what happened on the 5-minute chart. A rise to this level

EUR/USD and GBP/USD trading plan for beginners on February 1, 2023

The EURUSD currency pair reached the 1.0800 support level during the downward activity. This price move led to the transition from the flat stage to a full-blown correction. However, this

Yesterday, there were good signals to enter the market. Let's take a look at the 5-minute chart to figure out what happened. Earlier, I asked you to focus