Forex Analysis & Reviews: GBP/USD. Overview for December 6. Does the British pound have a bright future?

On Monday, the GBP/USD currency pair also started to adjust after the euro. Except for the retail sales report, which only applied to the European Union, the British pound had exactly the same foundation as the euro. Thus, a "neutral" business activity index was also published in Britain, and news stories in the United States focused on both currency pairs. Therefore, it was logical and natural for the pound/dollar pair to decline on Monday. Unlike its movements from the previous week or weeks. Unfortunately, the legitimacy of the dollar's growth yesterday leaves us in the dark as to whether or not the market is now prepared to stop making illogical purchases of the pound in favor of more sensible purchases of the dollar. After all, today's macroeconomic and fundamental backgrounds won't exist, so the pair's growth may resume. It might start up again after a few days. As a result, it is still essential to carefully watch the "technique."

And the "technique" is still almost entirely clear at this point. On the 4-hour and 24-hour TF, every indicator is pointing upward. A consolidation below the moving average line might be the earliest warning sign to sell. Even so, it won't be regarded as a powerful signal. However, every powerful movement begins with a small step. Therefore, you must first overcome the moving average before anticipating a stronger pair fall. Technically, everything will remain absurdly simple if the subsequent attempt to overcome the moving fails. The upward trend will continue, and it will be possible to purchase a pair more using the Heiken Ashi indicator's upward reversals.

Whatever perspective you take, the dollar should increase.

As was already mentioned, there won't be many significant events this week in either the UK or the USA. The US ISM services sector yesterday released a fairly significant index of business activity, which led to a strengthening of the dollar. There won't be any additional significant macroeconomic events this week. The "silence mode" among the members of the monetary committees is also activated because even important speeches are not scheduled due to the impending meetings of the BA and the Fed.

From our perspective, the time is right for a downward correction. However, despite our patiently waiting for it for two weeks, the market has continued to demand a pair. So, generally speaking, we stick with what we previously believed. Fundamentally speaking, the correction ought to be strong at the moment. From a technical perspective, the pair can keep expanding indefinitely.

The dollar may benefit little, even from the Fed and BA meetings. The news that the Federal Reserve will start to slow down the pace of tightening monetary policy shocked the market greatly. Still, these disappointments have already been resolved, giving the dollar a chance to rise before the meeting of the American regulator. The market steadfastly ignored the previous eight rate increases, so it can ignore the ninth, making life easier with the Bank of England. The currency pair has enough time to move up and down because the meetings are still one and a half to two weeks away. Additionally, the British regulator can "moderate its enthusiasm" and only increase the rate by 0.5% in December. Further, this could lead to traders' dissatisfaction and a sell-off of the pound, which has been rising unreasonably recently along with everything else. 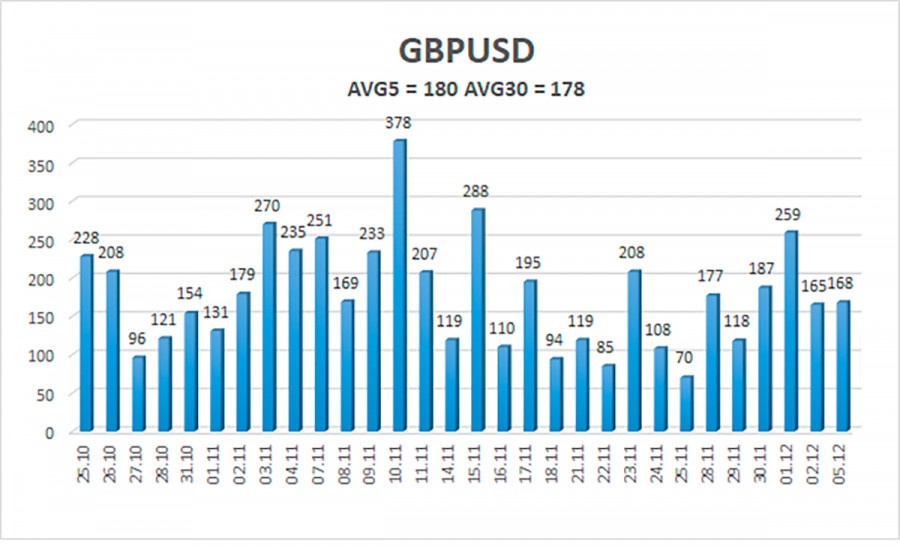 Over the previous five trading days, the GBP/USD pair has experienced an average volatility of 180 points. This value for the dollar/pound exchange rate is "very high." As a result, on Tuesday, December 6, we anticipate movement constrained by the levels of 1.2000 and 1.2362. The Heiken Ashi indicator's upward reversal indicates that the upward movement has resumed.

In the 4-hour timeframe, the GBP/USD pair has begun a new round of correction. Therefore, in the event of an upward reversal of the Heiken Ashi indicator, new buy orders with targets of 1.2329 and 1.2362 should be considered. With targets of 1.2000 and 1.1963, open sell orders should be fixed below the moving average.