Forex Analysis & Reviews: The ECB and the Bank of England can emulate the Fed's actions without waiting for the Fed to do so first.

After a string of similarly bizarre days, Monday was very strange. Many people are already perplexed as to why the euro and the pound continue to rise even on days without justification. If almost all factors point in this direction, why isn't the creation of a correction set of waves for both instruments started right away? If there is no explanation, why is the demand for US currency decreasing almost daily? Remember that last week, although he said nothing fundamentally novel in his speech, Jerome Powell brought down the dollar's value, demonstrating the validity of these questions. The dollar rose for an hour before falling again, making Friday's payrolls appear paradoxical. Additionally, nonfarm payrolls revealed that everything is fine with the US labor market. There is no need to worry about a recession, and the Fed can keep raising rates to the currently planned level of 5%.

What do we ultimately have? The ECB may increase the interest rate by 2% or 2.5%, but there is little difference between those increases. The Fed will increase interest rates by at least 1%, and the Bank of England and ECB will likely do so. All three central banks will increase interest rates to slow inflation, at least for the foreseeable future. The pace of interest rate increases will be slowed down in the near future by all three central banks following the same trend. The situation is unchanged, but demand for US dollars is steadily declining while demand for the euro and the pound is rising.

When it was widely believed in the market a few weeks ago that only the Fed would slow the tightening of monetary policy in December, more and more analysts are now inclined to think that the Bank of England and the ECB will do the same. All three banks are now anticipated to increase rates by 50 basis points. In this scenario, there will be even fewer factors supporting the rise of the euro and pound, as one of the few causes of the dollar's decline at the moment could be characterized as the highest likelihood of convergence with the most abrasive PEPP tightening strategy. The euro and the pound will lose this advantage if the ECB and the Bank of England do not raise their rates by 75 basis points. 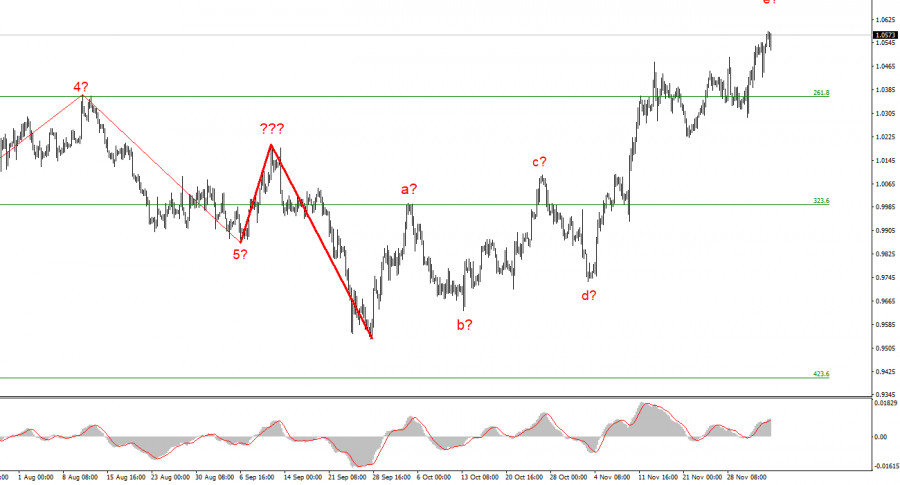 Even without the abovementioned condition, I have long anticipated a quote decline. With the circumstances mentioned above, it ought to be even faster and stronger. The further both instruments go, the more painful and powerful their eventual fall will be. The market may trade in very challenging ways to comprehend, but eventually, everything returns to equilibrium. Additionally, the European and British currencies might not find this balance appealing.

I conclude that the upward trend section's construction is complete and has increased complexity to five waves. As a result, I suggest making sales with targets close to the estimated 0.9994 level, or 323.6% Fibonacci. The likelihood of this scenario is increasing, and there is a chance that the upward portion of the trend will become more complicated and take on an extended form. 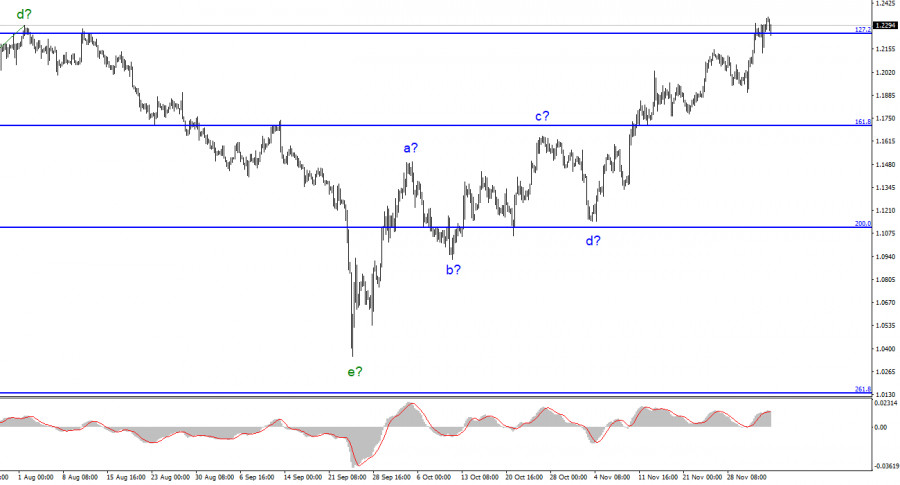 The construction of a new downward trend segment is predicated on the wave pattern of the pound/dollar instrument. Since the wave marking permits the current structure of a downward trend section, I cannot advise purchasing the instrument. With targets around the 1.1707 mark, or 161.8% Fibonacci, sales are now more accurate. The wave e, however, can evolve into an even longer form.