Forex Analysis & Reviews: USD/CAD: ahead of the Bank of Canada meeting 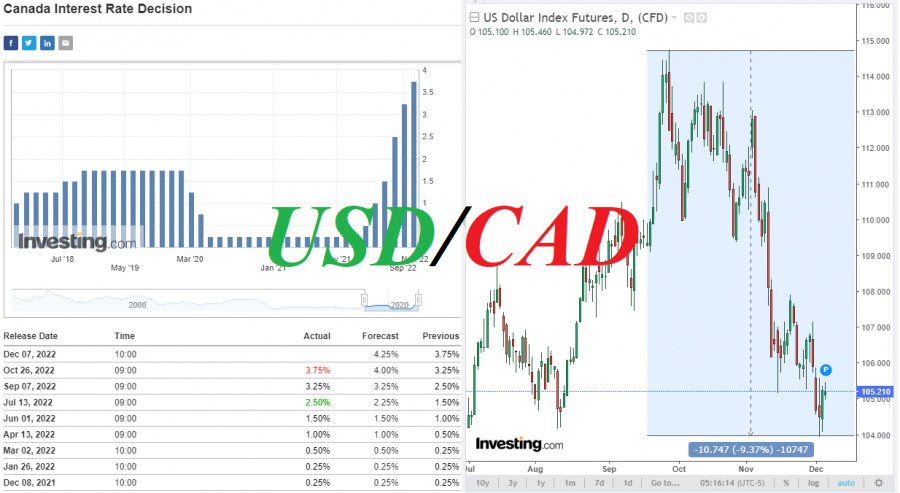 The ISM reported yesterday that business activity in the US services sector grew at an accelerated pace in November: services PMI rose to 56.5 (against the forecast of growth to 53.1 and the value of 54.4 in October). Other components of the ISM report showed that the employment index rose to 51.1 from 49.1, while the inflation price index fell in November to 70 from 70.7, which is stronger than the forecast of 73.6.

"Increased capacity and shorter lead times have resulted in a continued improvement in supply chain and logistics performance," ISM said.

The dollar reacted with a sharp strengthening after the publication of these data. The dollar index (DXY) rose on Monday by 0.75%, again rising to the zone above 105.00.

During today's sluggish trading in Asia, the dollar held on to its gains yesterday, and futures for the DXY index are trading at 105.21 as of writing.

Meanwhile, yesterday's US PMI did not shake the confidence of market participants that at the meeting on December 13–14, the Fed will raise interest rates by 0.50% and not by 0.75%, as previously planned. This probability is estimated by market participants at 80%, according to CEM Group.

Of the news for today, which can somehow stir up traders, it is probably worth paying attention to the publication (at 13:30 and 15:00 GMT) of data on Canadian international trade statistics and the Ivey PMI, showing the degree of economic health of Canada. The indicator is expected to rise to 61.3 in November (previous values: 50.1 (October 2022), 59.5, 60.9, 49.6), which is likely to positively affect the CAD, although this data also cannot be attributed to the strong drivers of the market and quotes of the Canadian dollar. But, as they say, at least something.

As for the USD/CAD pair, after yesterday's powerful upward spurt, it is rising again today, strengthening moderately from the opening of the Asian trading session. In addition to yesterday's data, which had a positive effect on USD, the weakening of the Canadian dollar also contributes to the growth of the USD/CAD pair, including against the background of a renewed decline in oil prices. Since the beginning of this month, the price of Brent crude oil has lost 6% in value, continuing to decline today. Futures on major US stock indices also moderately fell today—the third trading day in a row. As you know, primary currencies react negatively to the weakness and the negative dynamics of the stock markets and decline in commodity prices.

The main event in the dynamics of the Canadian dollar and the USD/CAD pair this week may be tomorrow's meeting of the Bank of Canada. Its interest rate decision will be published at 15:00 (GMT).

The Bank of Canada, like many of the world's major central banks that have taken the path of tightening monetary policy, is in a tricky situation—to curb inflation without hurting the national economy. Inflation in Canada has accelerated to a near 40-year high (in February 2022, Canadian consumer prices rose 5.7% YoY after rising 5.1% in January to a 30-year high, to 7.7% in May and 8.1% in June). This is the highest rate since early 1983. But in September and October, it had already fallen to 6.9%. Even though the BoC's inflation target is in the 1%–3% range, its tight monetary policy is definitely producing positive results—inflation is declining.

At its October 26 meeting, the Bank of Canada raised its benchmark interest rate by 50 basis points to 3.75%, although a 75 bps increase was widely expected. BoC Governor Tiff Macklem said that bank leaders are nearing the end of the tightening cycle.

The current interest rate, as we noted, is 3.75%. The BoC is expected to raise interest rates again at this meeting, most likely by 0.50%.

In an accompanying statement, Bank of Canada officials will explain the decision and possibly share plans for the monetary policy outlook.