In my morning review, I mentioned the level of 1.2179 and recommended entering the market from there. Let's see what happened on the 5-minute chart. A decline and a false breakout at this level allowed traders to add more long positions on the pair in line with yesterday's trend. Yet, the buying activity was weak. As a result, the price broke through 1.2179 after a while, forcing traders to close their positions with losses. For the second half of the day, the technical outlook has been changed. 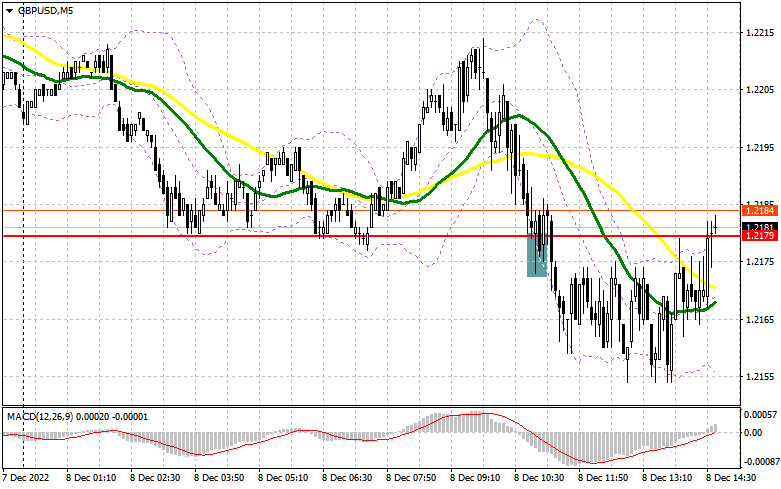 For long positions on GBP/USD:

Today, market participants will take notice of the weekly jobless claims that are unlikely to influence the US dollar. A decline and a false breakout at the new resistance level of 1.2158 will create an excellent entry point into long positions. This may result in the pound rushing to the upside to test 1.2210. A breakout of this range and its downward retest will open the door for bulls by creating a buy signal and sending the price toward 1.2264. The level of 1.2316, which almost coincides with the monthly high, will serve as the highest target where I recommend profit taking. If bulls are unable to drive the price up to 1.2168 in the second half of the day amid low trading volumes, the pair is likely to develop a strong downtrend in order to test yesterday's low at 1.2108. If so, it would be wise to buy the pair at this level only if a false breakout is formed. Going long on GBP/USD right after a rebound is recommended from 1.2057 or lower at 1.1999, bearing in mind an intraday correction of 30-35 pips.

For short positions on GBP/USD:

Bears have slowed down their activity after a failed attempt to seize control in the first half of the day. Now they need to regain control of the 1.2158 level. Strong economic data from the US may support the bearish trend. Even if no important reports are published today, which can be a good factor for the pair, GBP/USD may still depreciate. Sellers will have to focus on the resistance level of 1.2210 as its breakout will change the market balance. Only a false breakout at this level will form an excellent entry point for selling the pair with the downward target at 1.2158. A breakout of this range and its upward retest will create an additional sell signal with a prospect of a further decline to 1.2108 where bears may face resistance. The level of 1.2057 will serve as the lowest target where I recommend profit taking. In case bears fail to push the price down from 1.2210, bulls will attempt to return to the market and send the price higher to 1.2264. A false breakout at this level will give a good entry point into short positions with a prospect of a further decline. If bears show no activity at this level, it is better to sell GBP/USD immediately after a rebound from 1.2316, keeping in mind a possible downward correction of 30-35 pips within the day. 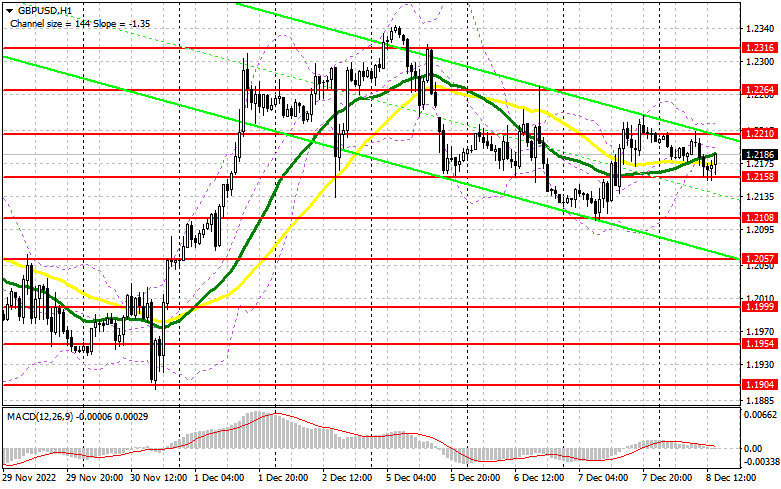 The Commitments of Traders (COT) report for November 29 showed a continued decrease in both short and long positions. Apparently, the recent macroeconomic data from the UK has dampened market optimism. A contraction in manufacturing and services activity indicates that the British economy is gradually sliding into a recession. The Bank of England prefers to ignore this fact as its top priority is to tame soaring inflation. According to the latest reports, inflation in the UK continues to accelerate. This is why It is hardly surprising that traders prefer to stay out of the market as they are not sure whether to buy or sell the pound. Given that the pair has strongly advanced since November this year, it is not advisable to open long positions at the current highs. Moreover, the US dollar is very likely to recover next week after the Fed's policy meeting and amid the strong performance of the US economy. The latest COT report revealed that long positions of the non-commercial group of traders decreased by 4,197 to 26,000 while short positions dropped by 4,275 to 62,584. This led to an increase in the negative value of the non-commercial net position to -36,584 versus -35,942 a week ago. The weekly closing price went up to 1.1958 from 1.1892.

Trading below the 30- and 50-day moving averages indicates market uncertainty.

In case of a decline, the lower band of the indicator at 1.2150 will serve as support.