There is resistance near the $17,200 mark on the BTCUSD chart, the breakout of which could be the beginning of growth for the main cryptocurrency.

However, we shouldn't get too excited just yet, as the next resistance is in the $18,000 area, and the fundamental background remains gloomy. 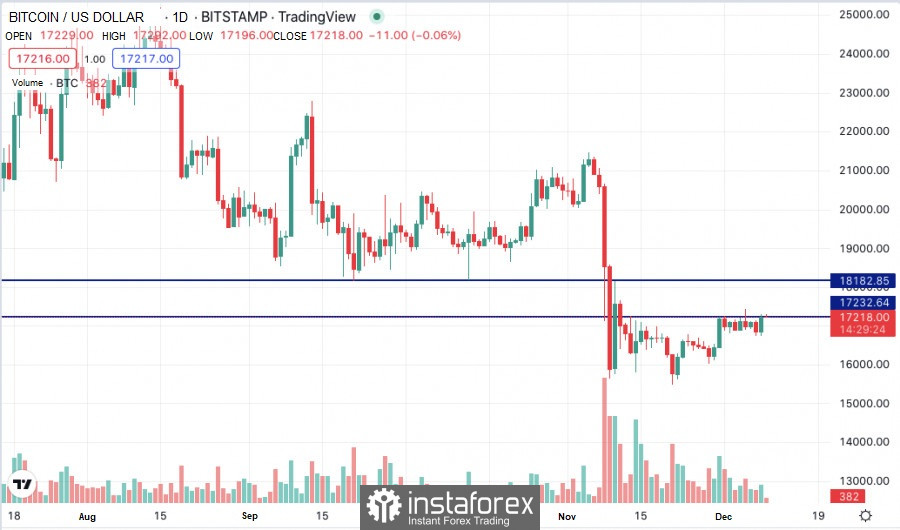 The holding and spending behavior of cryptocurrency whales can help to easily identify the BTC market cycle. The UTXO value range metric indicates that the rising price trend of the main cryptocurrency is often associated with the accumulation of Bitcoin by large holders.

However, network data shows that since June 2022, the whales have continued to reduce their Bitcoin holdings. After the Terra-LUNA crisis, they sold almost 367k BTC.

In addition, the price of BTC has been steadily declining since June. As such, they are still selling their BTC holdings, leaving the price under pressure.

On-chain data shows that whales with 1–10k BTC continued to liquidate their holdings during the miner capitulation phase until November. In fact, the whales began to accumulate coins, but sold their long positions in BTC due to the collapse of the FTX crypto exchange.

An upward sustained price trend is usually accompanied by whales holding onto their bitcoins. However, almost 80% of the sell-off of the main cryptocurrency since June has come from whales. Thus, a change in the market cycle can lead to a significant reduction in their costs.

Having expanded the frame and swung at the long-term forecast, let's remember about the upcoming halving.

Nevertheless, even with such a picture, Bitcoin, according to some analysts and experts, can still rise to $100,000.

In October 2022, Tone Vays, a crypto analyst and derivatives trader, said that the cryptocurrency market, along with the stock market, will experience bullish growth in 2023 as capital flows from Europe to the United States.

In one of his interviews, Vays said:

"I would be surprised if we're not approaching that $100,000 [Bitcoin price] sometime next year. I think that there will be a lot of speculative money flowing into the equities market and into crypto markets."

The trader also suggested that more investors may end up buying BTC as FOMO (fear of missing out) kicks in and they wouldn't want to miss out buying a crypto asset worth less than $10,000.

The upcoming halving is a powerful catalyst for growth

Meanwhile, other experts believe that Bitcoin will reach $100,000 in March 2024 as this date is close to the long-awaited halving due in the spring of that year.

Historically, the cryptocurrency have experienced significant price increases during halving. It increased its value by 1,263% between the periods of this important event in 2016 and 2020.

Halving is a process in which the block reward received by BTC miners is halved every after 210,000 blocks (approximately every four years).

Since this event halves the rate of production of new units of the asset to be issued into circulation, it serves as a means for the blockchain to introduce artificial price inflation until the time comes when all bitcoins have already been released.

This system is expected to work until the proposed limit for the digital coin, which is 21 million, is reached by the year 2140.