The market is slowly recovering from yesterday's storm. And the reason for this was the publication (at 12:30 GMT) of inflation figures for the United States. As follows from the report presented by the Bureau of Labor Statistics, the consumer price index (CPI) came out in July with a value of 8.5% (on an annualized basis), which was lower than the forecast of 8.7% and the previous value of 9.1%. Core CPI (excluding food and energy prices) remained unchanged at 5.9%, which was also below the forecast growth to 6.1%.

On a monthly basis, core inflation rose by 0.3% after a 0.7% rise in June, also indicating a slowdown in its growth rate.

Now the probability of a 75 bps Fed rate hike fell to 35% in September from 80% (before the publication of the CPI), according to the CME Group, which also affected the yield of US Treasury bonds, causing it to sharply decline.

Thus, the yield of 10-year US Treasury bonds popular with investors fell yesterday to an intra-week low of 2.688% and currently stands at 2.770%, which also corresponds to 3-month lows. 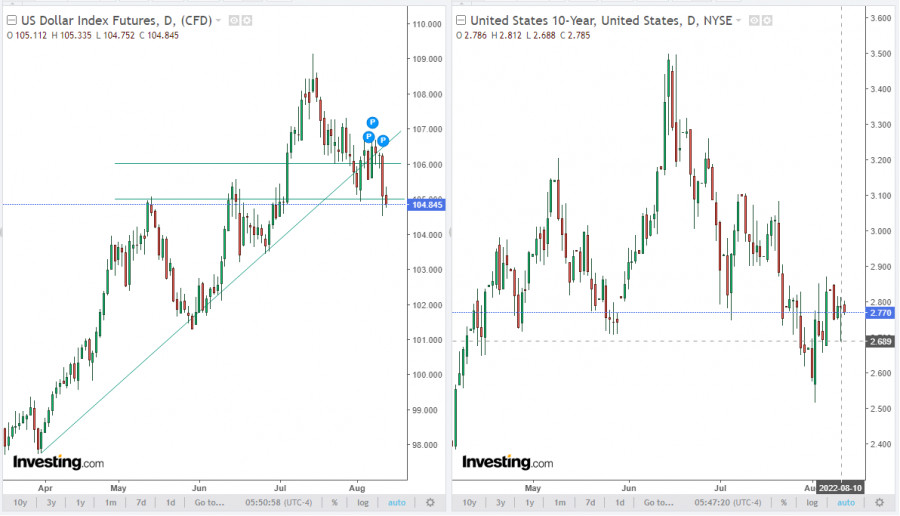 The weakening of expectations for further, tougher actions by the Fed (while still maintaining a relatively high level of inflation) and a decrease in the yield of US government bonds put pressure on the dollar. Its DXY index fell yesterday to 104.52, the lowest since early July, breaking through support at 106.00, 105.00.

Meanwhile, some economists warn that excessive pessimism about the dollar, which fell yesterday on weaker CPIs, may not be entirely appropriate, citing lingering geopolitical risks given the upcoming US midterm elections this fall.

Considering the current situation and the weakening of the dollar against the background of the remaining high inflation, gold quotes yesterday updated a 6-week high near the mark of $1807.00 per ounce.

One way or another, inflation in the world and the United States remains high, which makes investors resort to buying this popular defensive asset.

Its quotes are extremely sensitive to changes in the monetary policy of the world's leading central banks, especially the Fed. If the leaders of the US central bank, after yesterday's release of inflation indicators, announce a softer scenario in the tightening cycle of monetary policy, then gold may receive additional support.

Gold does not bring investment income but is in active demand during geopolitical and economic uncertainty, and a protective asset in the face of rising inflation. Now is just such a moment. 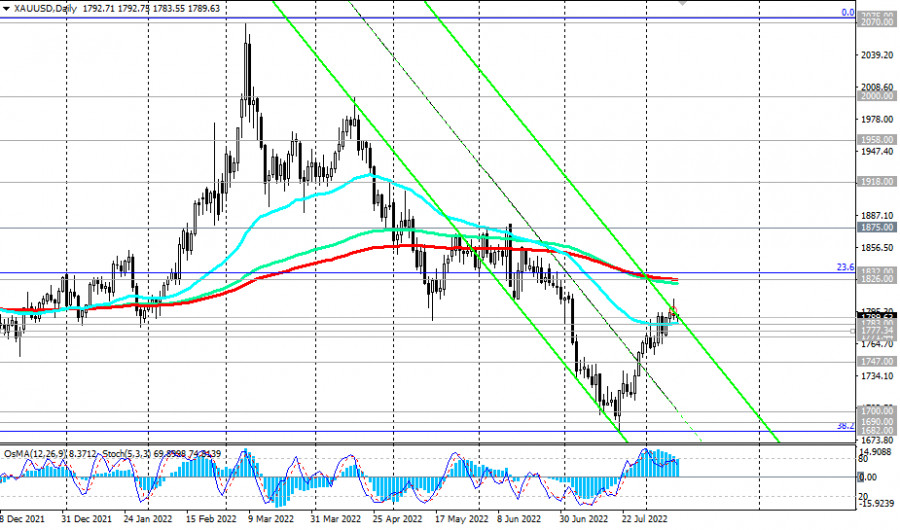 At the same time, note that gold quotes are again in the area of the key level of 1800.00, and some representatives of the Fed said yesterday that it is too early to announce "victory over inflation."

Thus, Minneapolis Fed President Neel Kashkari said yesterday that he "does not see anything that would change" the need for the Fed to raise the discount rate to 3.9% by the end of the year and to 4.4% by the end of 2023. While, Chicago Fed President Charles Evans called inflation "unacceptably" high.

Thus, in the coming weeks, we are likely to see a fight between buyers and sellers of gold and fluctuations in the XAU/USD pair between the levels of 1780.00 and 1820.00.

As for the news for today, it is worth paying attention to the publication of a block of American macro statistics at 12:30, which may increase volatility in the market if the data differs greatly from the forecast.