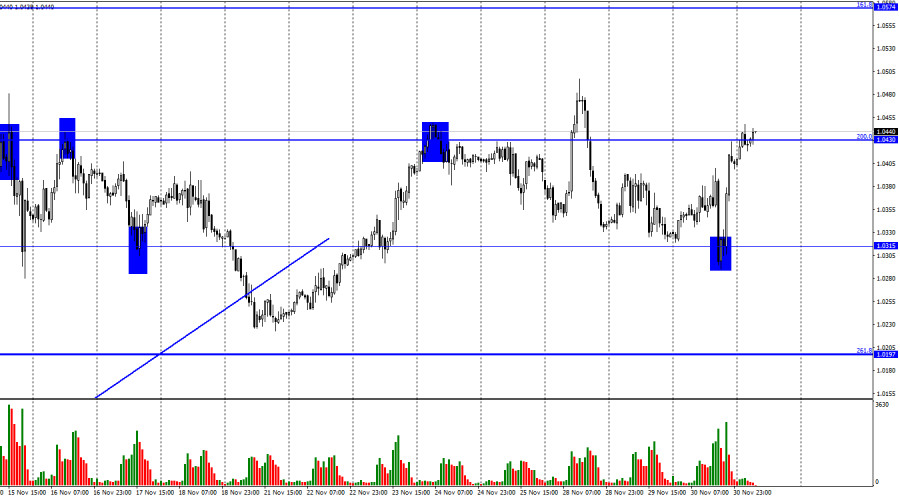 Hello, dear traders! On Wednesday, EUR/USD dropped to 1.0315, rebounded, and went up to the 200.0% Fibonacci level of 1.0430. In case of a pullback, the pair will reverse and head toward 1.0315. However, if the quote closes above 1.0430, growth may extend to the 161.8% retracement level of 1.0574. Yesterday, the eurozone saw the release of inflation data for November. The reading decreased to 10% from 10.6%, which was enough to trigger a sell-off in the euro. A slowdown in inflation means that the ECB may start reducing the pace of tightening in December. In fact, some ECB officials back a 0.50% increase in interest rates at the coming meeting. Yet, a sell-off did not take place.

In the US, the ADP report logged a fall in new jobs to 127,000 in November from 239,000 a month earlier. Meanwhile, the GDP report revealed that the American economy was expanding faster than expected. It took traders an hour and a half to digest the results and begin to sell the instrument.

A sell-off in the dollar started after the speech from Fed Chair Powell. The pair went up, down, and up again within one day. In fact, Powell's statement did not contain new information that could push the dollar down by 160 pips. 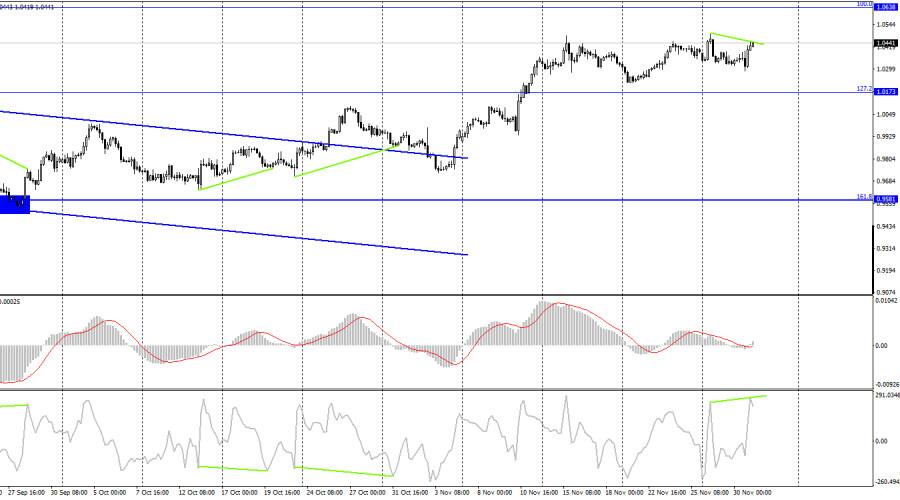 In the 4-hour time frame, the pair settled above the 127.2% retracement level of 1.0173. At this point in time, the quote is trying to return to the mark. The uptrend will continue to the 100.0% retracement level of 1.0638 in case of a rebound. At the same time, if the price consolidates below 1.0173, the pair may head toward the 161.8% Fibonacci level of 0.9581. The CCI indicator shows an impending divergence, meaning a bearish reversal is likely. 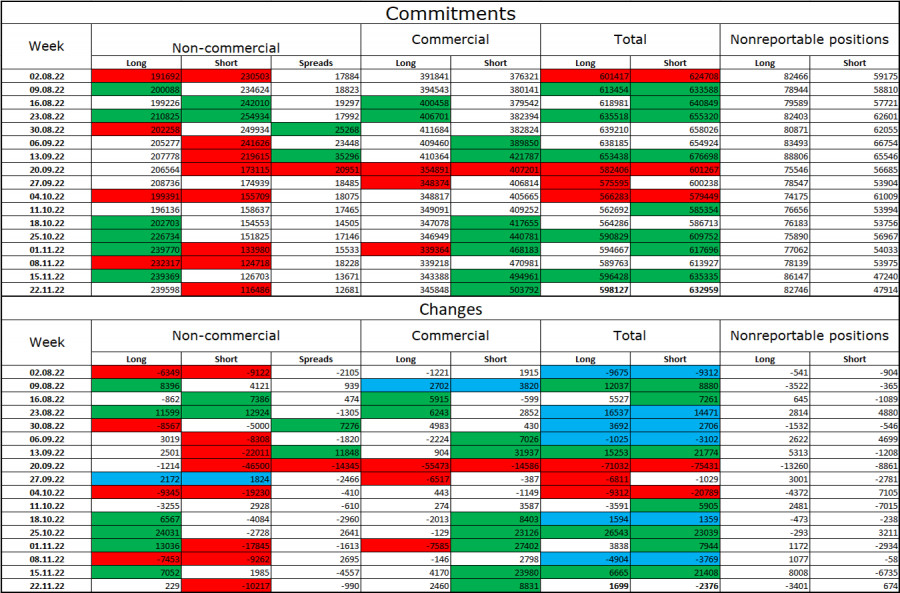 This week, the new COT report came on Wednesday. During the reporting week, speculators opened 229 long positions and closed 10,217 short ones, illustrating an increase in bullish sentiment. Speculators are currently holding 239,000 long positions and 116,000 short ones. The euro is now bullish, which is in line with the COT report, with the number of longs twice exceeding that of shorts. Over the past several weeks, the currency has had more growth prospects. However, traders are not ready to give up USD purchases. In addition, there is a descending corridor on the 4-hour chart. The price actually managed to close above it. Therefore, we may see a continuation of the uptrend

On December 1, the macroeconomic calendar contains important releases both in the eurozone and the United States. Traders should pay closer attention to data on business activity.

Let's take a look at the technical picture of USD/JPY, EUR/USD

Description : Looking at the H4 chart, my overall bias for USDCAD is bearish as there is a descending trend line, Looking for a sell entry at 1.34628 where below

Description : Looking at the H4 chart, my overall bias for ETHUSD is bullish due to the current price crossing above the Ichimoku cloud, indicating a bullish market. Looking

Analysis of Gold for February 08,.2023 - Breakout of the trading range to the upside and potential for the growth

Technical analysis: Gold has been trading upside this morning and I found the breakout of the symmetrical triangle in the background, which is good sign for the further upside movement

Technical analysis: USD/JPY has been trading downside and I found the breakout of the symmetrical triangle in the background, which is good sign for the furtehr downside movement. Trading recommendation

Technical Analysis of GBP/USD for February 8, 2023

Technical Market Outlook: The GBP/USD pair had made Bullish Engulfing candlestick pattern at the level of 1.1960 on the H4 time frame chart and now is trying to break above

Technical Analysis of EUR/USD for February 8, 2023

The pound-dollar pair may move upward from the level of 1.2044 (closing of yesterday's daily candle) to 1.2074, the 23.6% pullback level (yellow dotted line). In the case of testing