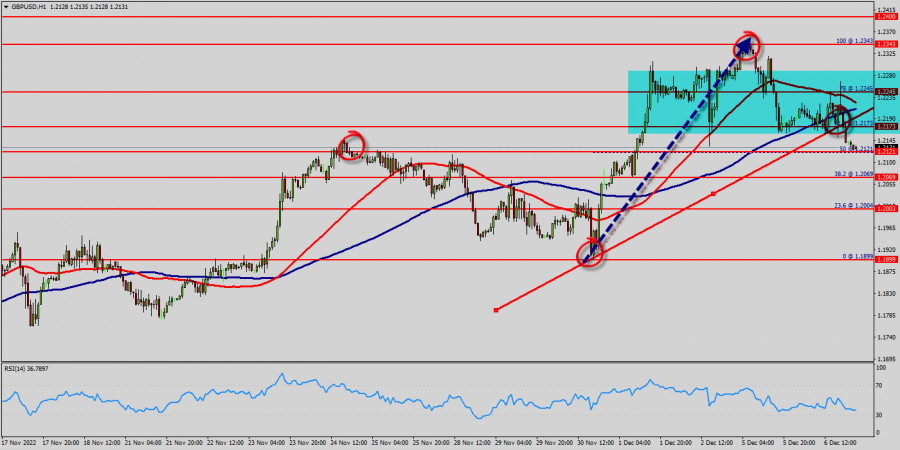 Moreover, the RSI starts signaling a downward trend, as the trend is still showing strength above the moving average (100) and (50). Thus, the market is indicating a bearish opportunity below 1.2173 so it will be good to sell at 1.2173 with the first target of 1.2069.

It will also call for a downtrend in order to continue towards 1.2003. The daily strong support is seen at 1.2003.

The volatility is a statistical measure of a market's price movements in a given period of time. If prices for a currency have shown large instability over a short time period, then the market is highly volatile. If currencies are relatively stable, then volatility is low. In the very short term, the general bullish opinion of this analysis is in opposition with technical indicators.

So long as the invalidation level of this analysis is not breached, the bullish direction is still favored, however the current short term bearish correction should be carefully watched.

On the other hand, the stop loss should always be taken into account, for that it will be reasonable to set your stop loss at the level of 1.2245.

GBPUSD is in a short-term bearish trend. Price is trading at 1.1980 making new lower lows and lower highs, approaching our short-term target of 1.19-1.18 after it broke below

Gold price is trading around $1,870. Short-term trend is bearish after the recent break down from last week. Price is now forming a triangle pattern clearly visible

Early in the American session, gold is trading around 1,867.25. We can see that it is trading within a symmetrical triangle pattern formed on February 3. According to the 4-hour

Let's take a look at the technical picture of AUD/USD, USD/JPY, EUR/USD and Bitcoin

Looking at the H4 chart, my overall bias for AUDUSD is bearish due to the current price being below the Ichimoku cloud, Looking for a sell entry at 0.68455 where

Looking at the H4 chart, my overall bias for ADAUSD is bearish due to the current price crossing below the Ichimoku cloud, indicating a bearish market. Looking for a sell

EUR/USD Higher time frames In the new weekly session, the pair continued its trajectory from the previous week. As a result, bears closed the day below the key support level

Watch for selling opportunities on the rallies on USD/JPY