The battle between the financial markets and the Fed continues, which makes the EURUSD rush inside the trading range of 1.01–1.03 like a caged tiger. After Fed Chairman Jerome Powell's speech at a press conference following the July FOMC meeting, investors were confident in a slowdown in monetary restriction, followed by a reduction in the federal funds rate in 2023. Numerous "hawkish" speeches by Fed officials sowed doubts in their ranks but did not completely dissuade them.

Financial markets threw down the gauntlet to the Fed itself, which often ended badly for them. However, there were precedents in history when the Central Bank retreated, allowing billions of dollars to be earned on this. Take, for example, the case of George Soros and the Bank of England in 1992. Today, investors expect that numerous signals of a slowdown in the US economy will force the Fed to reduce its degree of decisiveness. However, if such a dove in the past, and now centrist Chicago Fed President Charles Evans, says that the federal funds rate should rise to 3.5% in 2022 and continue to rally in 2023, what about the rest? St. Louis Fed President James Bullard would like to see borrowing costs at 4% this year.

The futures market had a different version. The Fed's transition to a meeting-to-meeting mode, followed by a technical recession in the United States and a drop in business activity below the critical 50 mark, allowed us to talk about a "dovish" reversal almost at the end of 2022. Curiously, following the Fed rate, the markets reduced the size of the expected growth and the ECB rate. Now they believe that +100 bps to the current zero value of the indicator is the ceiling.

Dynamics of the expected value of the ECB rate 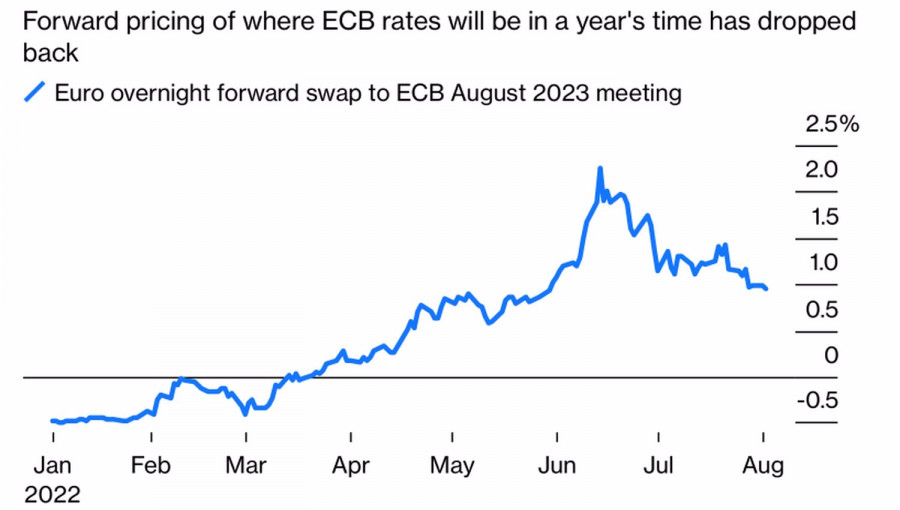 It is reasonable to assume that the recession in the euro area will be more severe than in the US. The proximity of the currency bloc to the zone of armed conflict in Ukraine, its dependence on Russian oil and gas, as well as the energy crisis associated with this, make Commerzbank think that in the event of a complete shutdown of blue fuel, a recession in the German economy will be the same in scale as in 2008. Judging by drawing parallels with the role of Lehman Brothers in the events of those days, German Economy Minister Robert Habeck takes a similar position. 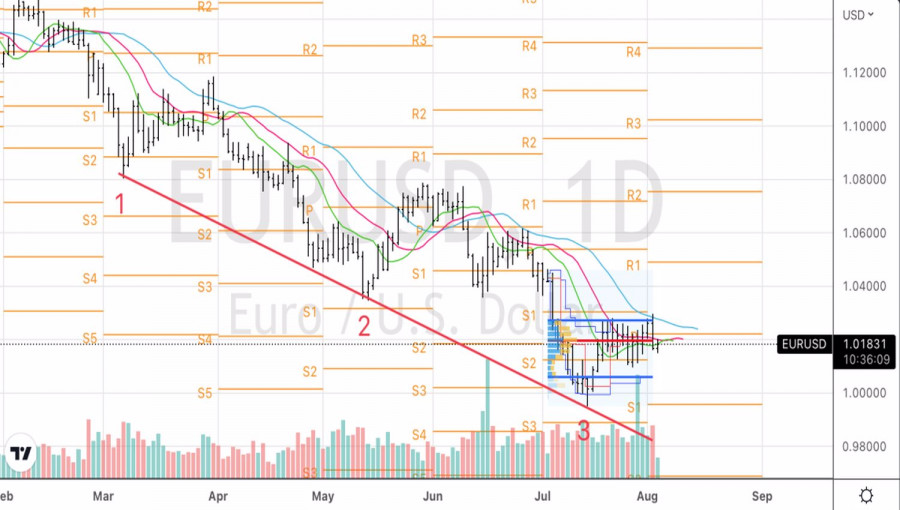 Doubts about which path the Fed and ECB rates will follow next, as well as about where the recession will be deeper, in Europe or North America, pushed EURUSD quotes into the trading range of 1.01–1.03. Traders expect that US labor market statistics for July will help to break out of it.

Technically, the EURUSD consolidation on the daily chart shows no signs of completion. After several failed attempts to break above the resistance at 1.027, the bulls retreated. Their inability to return the pair above its fair value at 1.019 could be a sign of weakness and a reason to sell the major currency pair in the event of a successful assault on support at 1.015.