Jamie Dimon - CEO of JPMorgan Chase & Co. - he reiterated his unfavorable position towards the cryptocurrency market. This time, in his statement, he described bitcoin and the rest of the digital assets as "decentralized Ponzi schemes."

Aside from JPMorgan's CEO's open aversion to digital assets, the international investment bank has been offering its clients some services related to this market for some time. The company has recently announced that it will continue to provide this type of service, despite the downturn on the market.

JPMorgan's executives are known for their hostility to cryptocurrencies and especially for their criticism of bitcoin. Dimon spoke about the first cryptocurrency for years, describing it as "worthless". Additionally, he warned investors to stay away from BTC. In his last speech, the 66-year-old banker once again highlighted his negative stance by calling bitcoin and the entire digital asset market "decentralized Ponzi schemes."

He argued that criminals use digital currencies to carry out illegal operations, including money laundering and sex trafficking.

Despite many examples of attacks on the cryptocurrency industry, especially from the banking sector, the reality shows that it is a bit different. This is because many banks face accusations of involvement in mass money laundering. During this time, the blockchain technology on which the entire cryptocurrency sector is based is completely transparent, which gives everyone the ability to track the flow of funds.

To this day, cash remains the most common form in which criminals carry out drug and other drug transactions. According to various studies, it is estimated that from 34% to 39% of all cash in circulation is involved in such activities.

Interestingly, Jamie Dimon, despite his aversion to bitcoin, is not at all critical of blockchain technology and stablecoins. He believes that they can benefit the financial system if a number of comprehensive regulations are introduced. A few months ago, the CEO of JPMorgan once again spoke warmly about blockchain technology and decentralized finance (DeFi). At the time, he said that these technologies were "real" and could be "implemented both publicly and privately, with or without consent."

The ETH/USD pair has extended the post-Merge sell-off as the new swing low was made at $1,219. The bulls are trying to bounce, so the corrective cycle is ahead of us. The levels of $1,358, $1,407 and $1,424 will now act as the technical resistance for bulls as the market is trying to extend the bounce from the extremely oversold conditions on the H4 time frame chart. Moreover, the bullish divergence between the price and momentum indicator is seen on the H4 time frame chart. Nevertheless, the next target for bears is seen at the level of $1,100, $1,000 and $990. Despite the extremely oversold market conditions on the H4 time frame chart, the momentum remains weak and negative, which might indicate the ETH is still in the short-term down trend. 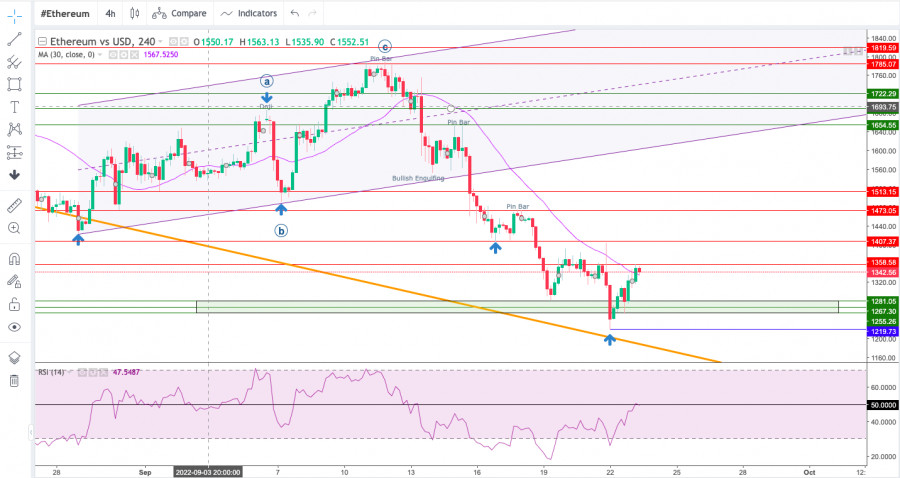 The Ethereum market has been seen making lower highs and lower low since the swing high was made in the middle of the August at the level of $2,029. The key technical support for bulls is seen at $1,281.9. If the down move will extend, then the next target for bears is located at the level of $1,000.