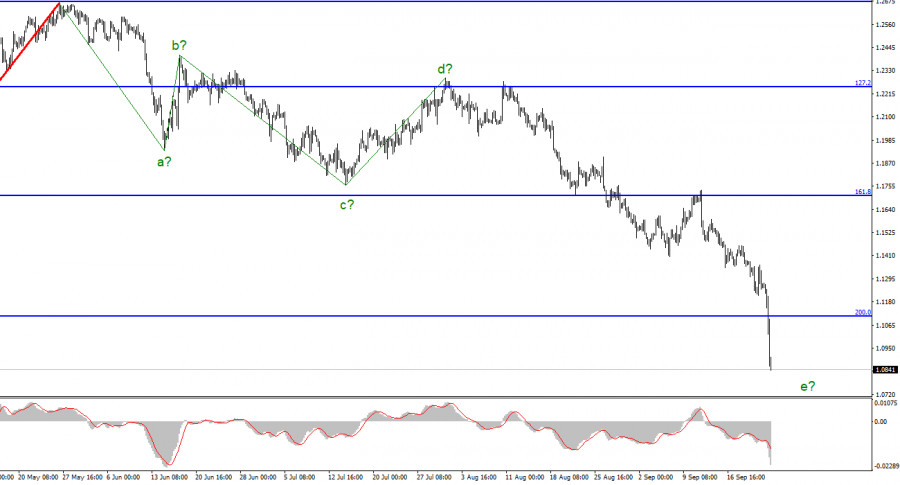 For the pound/dollar instrument, the wave marking looks quite complicated at the moment but still does not require any clarification. The upward wave, built between May 13 and May 27, does not fit into the overall wave picture, but it can still be considered corrective as part of the downward trend section. Thus, it can now be concluded that the downward section of the trend continues its construction. At the moment, we have completed waves a, b, c, and d, so we can assume that the instrument is inside wave e. Within this wave, waves of a lower scale are being viewed, and I can assume that the last increase in quotes is wave 4 in e. If this is indeed the case, then the decline in quotes continues within the framework of wave 5 in e, which can be completed at any time – it has already taken on too extended a form. But the wave marking for the euro currency has already suffered certain changes, which means it can also suffer for the pound sterling. Both the downward trend sections may take on an even more extended form. Therefore, both instruments continue to move almost without corrective structures. As before, you must try isolating impulse structures and working on them.

The market crashed the pound sterling on Friday.

The exchange rate of the pound/dollar instrument decreased by 416 basis points on September 23. No, this is not a typo, and yesterday there were no speeches by Andrew Bailey, Jerome Powell, Joe Biden, and Liz Truss, and there were no meetings of central banks or important statistics. It's just that the market decided on Friday to sell the British dollar at a higher rate than on Wednesday and Thursday, when the Fed and the Bank of England meetings became known. I still believe that relying only on the news background and the British pound could have avoided such a fall. Nevertheless, the Bank of England continues to tighten monetary policy, showing that it struggles with high inflation. Even if the market considers the current rate of interest rate increase insufficient, this is still not a reason for such a strong decline in demand for the pound. And, of course, weak business activity indices in the UK could not be the reason for the collapse by 400 points. Business activity in the manufacturing sector increased slightly in September but remained below the 50.0 mark. But let me remind you that at the same time, two of the three business activity indices in the United States also increased but remained below the 50.0 mark. If the market bought the dollar because the indices still rose, why didn't it buy the pound here, since one of the indices rose, and the other two declined slightly?

It seems that the British collapsed on Friday due to all factors. All this led to a strong drop in demand for the instrument. Wave e is already taking on too long a look, but who will forbid the market to continue selling the pound? 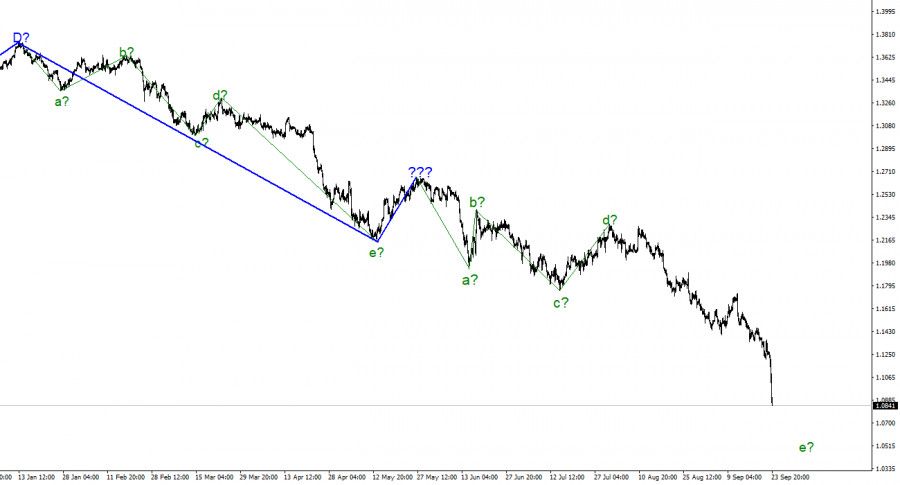 The wave pattern of the pound/dollar instrument suggests a continued decline in demand for the pound. I advise selling the tool now, as before. It is necessary to sell more cautiously since, despite a strong decline, the construction of a downward trend section may be completed in the near future. And the goals of this section are scattered up to the 1.0140 mark, corresponding to 261.8% Fibonacci.

Litecoin has broken above minor resistance at 80.61 which has opened up the way to a rally towards 96.90 as the next upside target. Longer term, we are looking

EUR/USD continue to follow the expected path higher. After a break above minor resistance at 1.0481, the upside has been cleared for a rally towards 1.0785 and 1.0926

GBP/USD. Analysis for December 3. Now we are focusing on future meetings of central banks.

The wave marking on the euro/dollar instrument's 4-hour chart still appears quite accurate. However, the entire upward portion of the trend is starting to get more complicated. It has already