Forex Analysis & Reviews: EUR/USD. Overview for December 6. The Fed will keep rates at the maximum level for at least 18 months.

On Monday, the EUR/USD currency pair made a small adjustment but is still above the moving average line. As a result, we can only discuss a rollback, not a correction. There were legitimate reasons for the pair to fall on Monday, and all signs still point upward. As a result, it was a justified strengthening of the US dollar rather than a gesture of goodwill. Numerous reports of all kinds were released for the day, most of which had little chance of being noticed by traders. The only things that had an impact were the ISM index in the United States, which unexpectedly increased to 56.7 when everyone expected it to decline, and retail sales in the European Union, which decreased by almost 2%. The US dollar increased in both situations, which makes sense. So, Monday's big question (were traders satisfied with their purchases of the euro currency?) was unanswered. Purchases of the euro currency made without justification have been noted recently. There won't be any significant events in the EU or the USA today, so the pair's growth may already have resumed. We shall see.

Also, note that the downward correction is screaming at the top of its lungs; it is no longer just simmering. Small rollbacks occasionally still have a place, but they are very weak. Remember that the pair has already recovered 1,000 points in just two months from 20-year lows. When was the last time the euro fell for two years straight without being able to recover by more than 400 points? Since we understood that the euro currency could not continue to fall indefinitely, we have been waiting for a significant upward movement for a very long time. However, the euro's two-year decline was logical from the standpoint of geopolitics, which serves as its basis. And right now, the value of the euro is rising practically for free. Even though this may only be a technical adjustment on a global scale, we would still like to see some logic behind the movements.

The "tough" monetary policy of the Fed will last for a very long time.

We already mentioned a little above that the US dollar has increased over the past two years for a reason. And right now, for no apparent reason, the value of the euro is rising. Let's revisit the monetary policy of the Fed. The American Central Bank was the first to raise interest rates, and it did so quickly and aggressively. The rate is now at 4%, is almost certain to increase to 5%, and will stay at its peak level for the entirety of 2023 and the first half of 2024. Many experts whose opinions were sought out by The Financial Times expressed this prediction. They predict that the US economy will experience slower growth rates or a recession in the upcoming year, forcing the Fed to lower interest rates once or twice in 2024. Nevertheless, this will occur in at least 1.5 years. Rates will remain very high throughout, putting pressure on inflation and the economy. The size of the rate and the differences in rates with other central banks are more significant for the dollar, though. In other words, the US currency controls the Fed rate at 5% and the ECB rate at 3%.

This factor should already be supporting the US dollar and won't change in the future. The European currency cannot grow even in this scenario because the ECB rate is lower and is likely to stay that way because many experts, including us, have serious doubts about the European regulator's capacity to catch up to the American regulator. The market could have anticipated all future Fed rate hikes. Therefore, the dollar remains in the driver's seat from a fundamental perspective. If what we have observed over the past two months is, in fact, a global technical correction, it should be finished soon, and the pair will start to consolidate in a very small range. 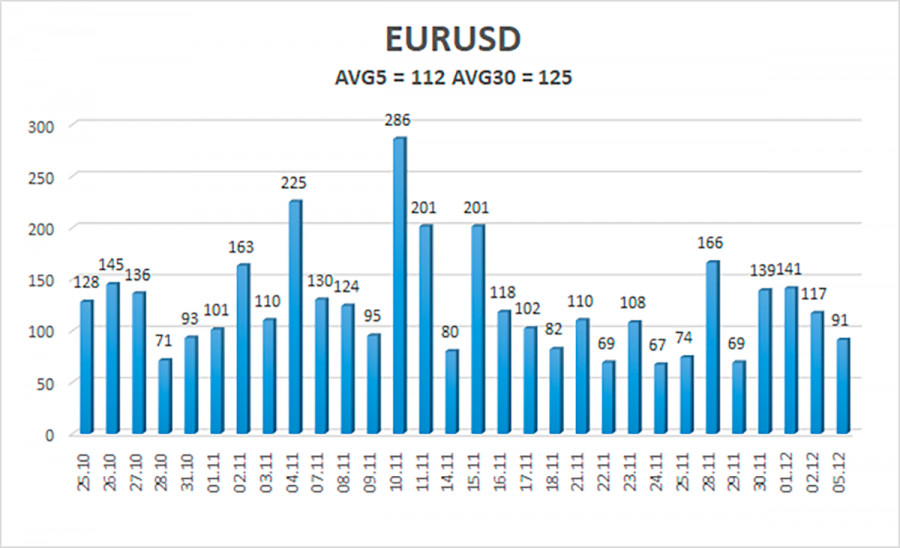 As of December 6, the euro/dollar currency pair's average volatility over the previous five trading days was 112 points, considered "high." As a result, we anticipate that the pair will fluctuate on Tuesday between 1.0395 and 1.0620. The Heiken Ashi indicator's upward reversal indicates that the upward movement has resumed.