Forex Analysis & Reviews: Overview of the GBP/USD pair. September 24. Results of the week. The pound fell by 400 points on Friday alone in the complete absence of important macroeconomic events. 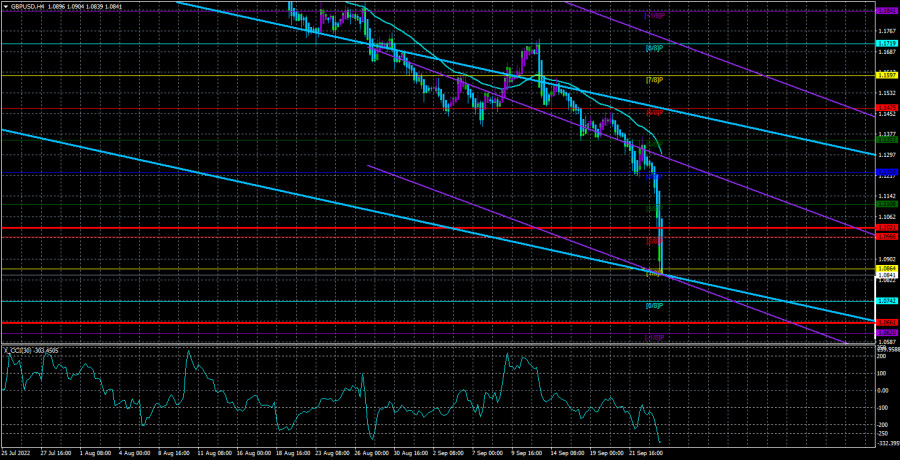 The GBP/USD currency pair has been trading tolerably for most of this week. In the first four days of the week, only 145 points were lost. Just think about it. We call the loss of 150 points in 4 days a "good result" for the pound. And this happens because the pound falls almost every day, and on Friday, it managed to depreciate by 400 points on an almost empty calendar of macroeconomic events. Even if a report on UK GDP was published on Friday, which would show a drop of a couple of percent, and with it, meetings of the Bank of England and the Fed were held; still a drop of 4 cents on a part-time day is a lot. Such a fall speaks only of one thing – there is panic in the market. And since the pound is suffering, not the dollar, this panic is associated with the same factors that have driven the pound down since the beginning of the year.

This is all the same familiar and rather boring "foundation" and geopolitics. With geopolitics, everything is as clear as day. The news about the mobilization in Russia had the effect of an exploding bomb in the markets, as hopes for the transition of the military conflict to the stage of a long-lasting one with the possibility to negotiate amicably collapsed like a house of cards. If the Russian Federation mobilizes, then in the near future, there will be an escalation of the conflict in Ukraine, which has already led to shocking consequences for the European and British economies.

It should be recalled that the UK and the EU are located as close as possible to the source of the conflict, so they cannot stay away from the consequences. The unprecedented sanctions imposed against Russia are also hitting the economies of the countries that imposed them. The most banal example is the refusal or reduction of oil and gas supplies to Russia, which led to prices for these types of energy resources soaring into the sky. At the same time, we are not talking about an increase of 15-20%, but an increase of 200–300%. If oil can somehow be replaced with an analog from other countries, then Europe and Britain will have big problems with gas. They consist not even of the fact that "blue fuel" may not be enough in the winter but that its price is increasing. In any case, an additional burden is created on the budget, households, enterprises, and businesses. If financial problems arise, then mass layoffs, cuts, and savings begin; all this negatively affects production volumes, the economy, and GDP. We see how business activity indices in the EU and the Kingdom are falling. Therefore, any new escalation of the conflict does not bode well for the whole of Europe. And the market, feeling this, tries to transfer its assets into the most stable and safe instruments and currencies.

The Bank of England raised the rate by 0.5%, but who cares?

The Bank of England also held a meeting this week, deciding to raise the rate by another half percentage point. The pound collapsed by 550 points at the end of the week. This is all you need to know about how the markets perceived BA's "hawkish" decision. You can talk as much as you like about the fact that the market expected a more serious rate hike and was disappointed. From our point of view, even an increase of 0.5% is still a tightening of monetary policy. Therefore, the pound could strengthen for at least one day. But that didn't happen either.

Consequently, market participants are now completely uninterested in watching the attempts of the British regulator to curb inflation. Many more important factors and events pull the pound to the bottom. The BA rate remains much lower than the Fed rate; the difference between them only increases from month to month, then what difference does it make in how much the BA raises the rate at the next meeting? The British Central Bank had raised the rate six times in a row before, and the pound was still flying down like a downed plane; the seventh time passed for the pound with the same effect. Well, Friday's collapse is generally an eloquent sign of the market that there are just no buyers now; they are not at all from the word "absolutely." 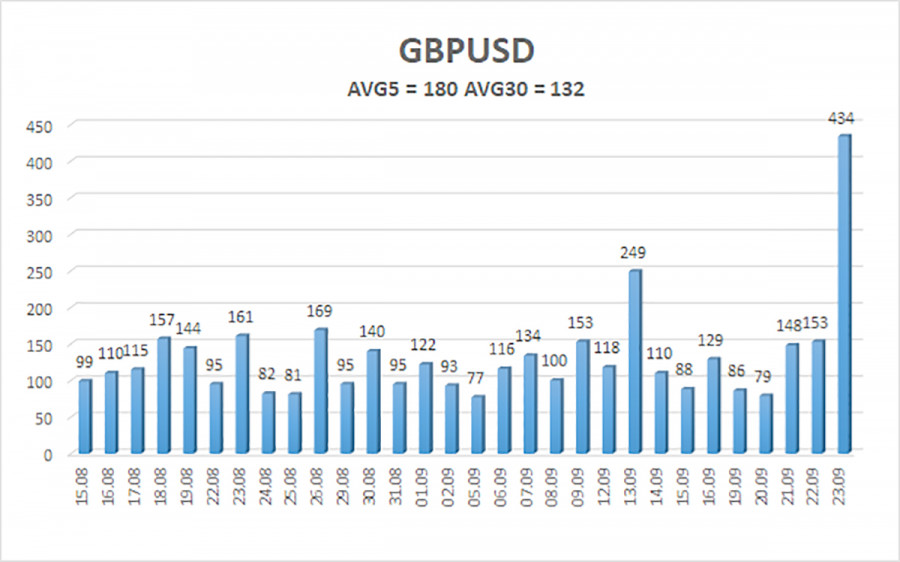 The average volatility of the GBP/USD pair over the last five trading days is 180 points. This value is "very high." On Monday, September 26, thus, we expect movement inside the channel, limited by the levels of 1.0661 and 1.1021. The upward reversal of the Heiken Ashi indicator signals a round of upward correction.

The GBP/USD pair continues its downward movement in the 4-hour timeframe. Therefore, at the moment, you should stay in sell orders with targets of 1.0742 and 1.0661 until the Heiken Ashi indicator turns up. Buy orders should be opened when fixed above the moving average with targets of 1.1353 and 1.1475.