The Alligator is a trend-following indicator which was developed by legendary trader Bill Williams. He discovered that financial markets and individual securities trend just 15-30% of the time, while markets trade in a sideways manner the other 70-85% of their operation time. He believes that traders can generate most of their profits during strongly trending periods. The Alligator indicator allows traders to assess a market condition at a particular time and find the right time for a market entry.

On a chart, the Alligator consists of three smoothed moving averages which are plotted by means of fractal geometry and nonlinear dynamics.

Thus, the Jaw, Teeth, and Lips show interaction of different time frames. As the market reveals an obvious trend for 15-30% of its time, it is wise to follow a trend and avoid trading in markets during range-bound periods. When the Jaw, Teeth, and Lips are tightly clenched (the lines are crisscrossing each other on the chart), the Alligator is already asleep or is going to fall asleep.

When the beast sleeps, its hunger gets worse. The longer it sleeps – the hungrier it will be when it wakes up. When the Alligator wakes up, it immediately opens its mouth wide. Then, the Alligator is alert to the activity of either bulls or bears in the market and starts a hunt. When the Alligator relieves its hunger, it loses interest in a price that is clear when the lines on the chart converge into narrow bands. It means the trend comes to an end, signaling a good time to lock in profits. 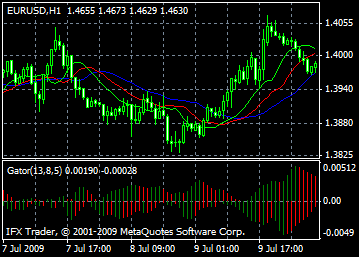 MEDIAN PRICE is an average price;

HIGH is the highest price of the bar;

LOW is the lowest price of the bar;

ALLIGATOR’S JAW is designated by the blue line;

ALLIGATOR’S TEETH is designated by the red line;

ALLIGATOR’S LIPS is designated by the green line.