Nowadays, when the density of all the segments of financial markets has reached its critical mass, and competition looks more and more like an arms race, entering the market and getting a stable position there appears to be a very bold ambition. However, not all ambitions are doomed to run upon the rocks of the financial market. A new player on Forex - InstaForex Company - has managed to become one the leaders of the market and to gain recognition of independent experts and the world's leading business newspapers already during the first 24 months of its existence. 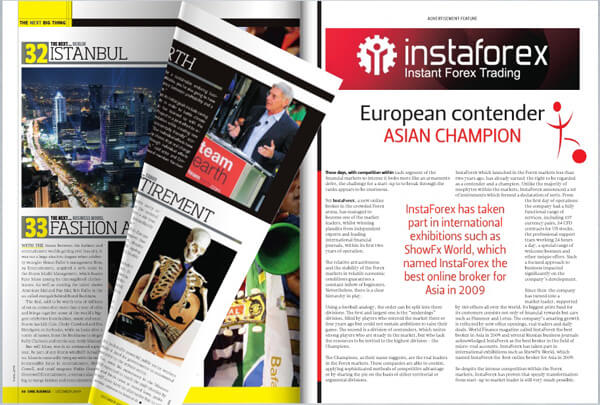 Forex has proven its special attractiveness and stability under various economic conditions. These factors,apart from profitability of Forex, are the basic motives for market entry. However, despite constant inflow of neophytes, there is a certain hierarchy on this market. Using the football terminology, this hierarchy is split into 3 divisions. The first and the biggest one is “underdogs”. This category is comprised of newcomers who entered the market 3-4 years ago, but did not reveal ambitions to raise their status by actions. The second one is a division of contenders which unites strong players who are stable on the market, but lacking a little power and resources to be invited to the highest division - “champions”. Champions are the real leaders of Forex who are able to coexist, applying sophisticated methods of competitive struggle or sharing the champion pie on the basis of territorial or segmental features. But there are always some exceptions which go out of any well-established practices. Thus, for example, InstaForex online broker has appeared on Forex just a little more than two years ago and has already gained the right to be a contender and a champion, depending on the region of its market activities. Two years ago, InstaForex Company, as well as most forex neophytes, positioned itself as universal broker having all the key brokerage instruments. However, unlike in case of the majority of forex neophytes, the announced set of InstaForex instruments was not a mere declaration: from the first day of its activities the company had a full range of functional instruments including 107 currency pairs, 34 CFDs for American shares, the professional support team working 24 hours a day, a very special spectrum of welcome bonuses and a lot of other unique offers. Such a fundamental approach to business significantly spurred the development of the company. During the following 2 years the company turned into one of the market leaders, which is proven by its 160 offices all over the world and the biggest prize pool for its customers - 350000 USD consisting of financial awards and also such prizes as Hummer and Lotus! Such an amazing growth of the company has found its refection not only in such parameters as a number of representative offices, customers and daily deals, but in evaluation of the company by the leading international business magazines. Thus, for instance, the authoritative magazine “World Finance” awarded InstaForex as the best broker in Asia in the year 2009, and several Russian business newspapers acknowledged InstaForex as the best broker in the segment of micro-real accounts. We also should take into account extremely successful participation of InstaForex Company in international exhibitions. Thus, the independent exhibition brand ShowFx World awarded InstaForex as the best online broker in Asia in 2009.

All these facts testify that swift movements and transformations from the neophyte into the market leader are still possible on Forex, despite its density and severe competition. It is worth mentioning that the success of InstaForex Company is not an occasion, but on the contrary, a result of the excellent market research and smooth market entry strategy. The company has made right conclusions and right stakes in its positioning and the development priorities. Eventually, the CNBC business magazine shares the opinion of the majority of experts and other business magazines acknowledging InstaForex Company as the fastest developing broker in the world.