It is clear that all economic difficulties of the policy will be attributed to the epidemic of coronavirus. After all, one cannot say that structurally the world economy is extremely vulnerable and there were many problems in it that no one solved. And then you have to report for an unprecedented increase in unemployment. The situation is really terrifying. The incredibly rapid growth rate of the number of unemployed, and not only in the United States, clearly shows that maybe coronavirus and measures to counter its spread have led to a surge in the number of unemployed, but that is not the point. This could only happen if employment was provided by artificial methods. Extremely cheap loans and rampant inflation of the financial sector have become the foundation for creating a huge number of jobs, however, these jobs were provided not at the expense of real economic efficiency, but by the endless supply of cheap money. As soon as a panic began in the markets and difficulties began to come up with financing, as major players were trying to save their money, this whole house of cards began to fall. The structure itself is extremely unstable and could not stand for a long time. So if it wasn't for the coronavirus, then a little later there would have been another reason for the general collapse. Perhaps, the design itself would begin to crumble under the weight of its own weight. In this whole situation, only the stubborn desire of the dollar to strengthen is surprising, which only occasionally gives way to its accidental weakening. And no matter how ridiculous it may look, we got an excellent explanation of the reasons for the growth of the dollar the other day. So it happened that no country in the world was ready for such an epidemic, and even the richest countries are faced with an elementary shortage of simple medical remedies. For example, masks, gloves and the like. Germany was no exception, which urgently ordered a bulk cargo ship of such funds. A bulk carrier can translate a gigantic amount of such protective equipment. So, Germany paid for everything and patiently waited for the arrival of the ship. But now, it will have to wait only for a refund, since, by the decision of the United States Government, this ship changed course and sailed not to Europe, but to North America. The indignation of Germany was so strong that other countries cast their voices, and France even admitted that it had already faced a similar situation. However, there it was not about masks, but about medical equipment. So the United States has clearly demonstrated to everyone that its own interests and security are above all and will not stop at anything to get what is required. And if all conceivable and inconceivable rules are violated at the same time, then this does not bother them at all. And now put yourself in the place of a major investor, who, in time of complete chaos and confusion, rushes about with the goal of more reliably hiding its capital. Where will you keep your money? It is better to entrust the money to the guys who will not hesitate to destroy everything and everything to get what they need. You never know, they might need them. If you give them to them in advance, they may even pay for them or maybe they'll just take them away and you'll have to thank them for not killing them at all. However, this is usually how events in the Middle ages are illustrated. And here, it turns out that in the 21st century, things are exactly the same. So the question about the strengthening of the dollar is probably removed. Any weakening of the dollar is a temporary mess, an accident until the United States resolves its own issues. 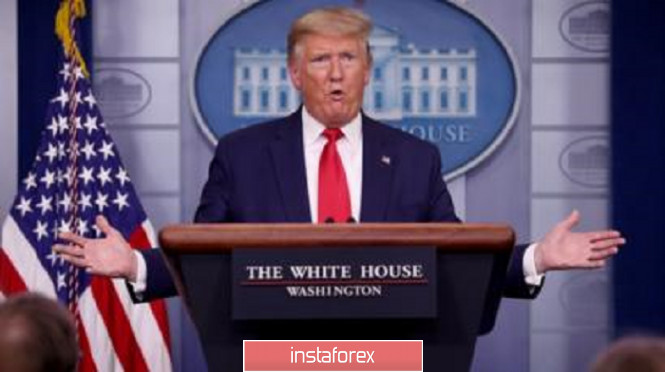 Let's be honest, the single European currency did not have any special reasons for growth apart from the report of the United States Department of Labor, which was more than leveled by a special operation to change the course of a ship loaded with all sorts of badly needed medical masks. Of course, you can point out the retail sales in Europe for a long time, the growth rate of which accelerated from 2.2% to 3.0%. In France, they generally accelerated from 2.6% to 3.4%. What can I say, even the decline in industrial production in Spain slowed down from -2.2% to -1.3%. In general, solid positive news. But the fact is that this is all the data for February, and now they love to say that the world will never be the same again. So, this world is changing, at least for Europe and North America, beginning closer to mid-March. Therefore, what happened in February is deeply parallel. But the final data on business activity indices just for March turned out to be just fine. For example, the index of business activity in the services of the euro area fell from 52.6 not to 28.4, but to 26.4. In Germany, it was supposed to decline from 52.5 to 34.5, but it turned out to 31.7. In France, it fell from 52.5 to 27.4, while a preliminary estimate spoke of 29.0. In Italy, it is still more fun, since the index fell from 52.1 to 17.4, while they expected a decrease to 20.0. Well, in Spain, the index was supposed to decrease from 52.1 to 25.0, and saw a fall to 23.0. It is clear that things are not in the best way with the composite index of business activity, in which the index of business activity in the service sector has the greatest weight. So the pan-European business activity index collapsed from 51.6 to 29, 7, although a preliminary estimate showed its reduction to 31.4. In Germany, it fell from 50.7 not to 37.2, but to 35.0. Well, in France, where they expected a reduction from 52.0 to 30.2, they got a drop to 28.9. In short, indeed, there is somehow no reason for the growth of the single European currency. After all, not only that the fall in the indices should have been just catastrophic, but it turned out to be even worse. 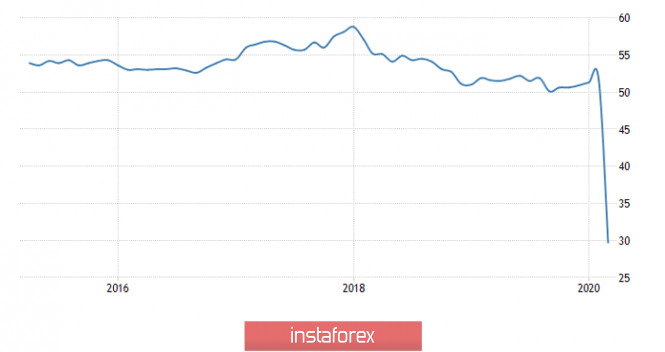 But on the other side of the English channel, the situation is fundamentally no different. For example, a preliminary assessment showed a decrease in the index of business activity in the services sector from 53.2 to 35.7, and in fact, a reduction to 34.5 was obtained. The composite business activity index simply declined from 53.0 to 36.0. And it was supposed to collapse only to 37.1. Although the size of the fall in the indices is so impressive that the deviations of the actual indicators from the preliminary estimate, it looks a bit ridiculous. Let's just say that there is no difference anymore. 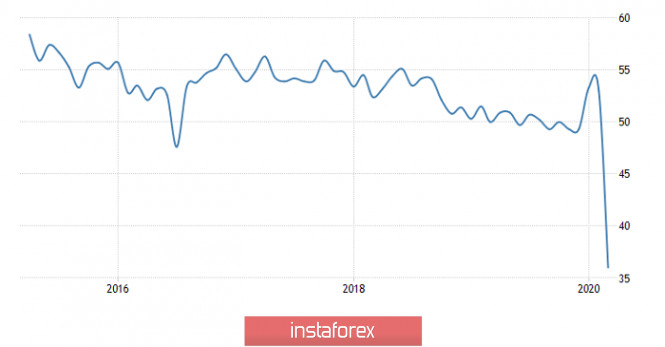 It's funny that the situation is slightly different in the United States, since the final values of business activity indices turned out to be better than the preliminary estimates showed. In particular, the index of business activity in the service sector, which was supposed to decrease from 49.4 to 39.1, only fell to 39.8. This allowed the composite business activity index to decline from 49.6 to 40.9, and not to 40.5. However, the scale of the decline in indices is still appalling. But most importantly, all this pales amid the contents of the report of the United States Department of Labor, which in fact simply confirmed the most terrible fears. Yes, there is a real disaster in the United States labor market. The unemployment rate jumped from 3.5% to 4.4%, and the number of jobs outside agriculture fell immediately by 701 thousand. This is much worse than forecasts that assured everyone that that the unemployment rate will increase to only 4.0%, and the number of jobs will be reduced by some 150 thousand. The reality turned out to be much worse. And there is no reason to believe that this is just a temporary difficulty and the situation on the labor market is about to improve. Forecasts show that the number of unemployed will only increase. Moreover, an impressive increase in the number of repeated applications for unemployment benefits is expected. That is, the duration of unemployment will increase. And since people are without work, then without income. This means that consumption will go down too. And the American market is the largest market in the world. Consequently, there will be less work worldwide. First, in those countries that manufacture finished products exported to the United States and then in those countries that supply raw materials from which all these goods are made. Thus, the situation is really scary. And most importantly, all this clearly demonstrates the weakness of the American economy. Indeed, if a business is efficient and generates profit, then in case of difficulties it has at least some margin of safety. For some time, employers are able to hold out. And here, we literally see instant growth of the army of the unemployed. That is, the business does not have any margin of safety. This suggests that the real effectiveness of many companies is likely to be generally negative, and they only live off cheap credit. This is not an economy. This is a virtual economy. In economic science, there is even a suitable term for this - zombie economy. But all this does not matter, because the story of the cargo ship for Germany showed everyone where they should keep their money. 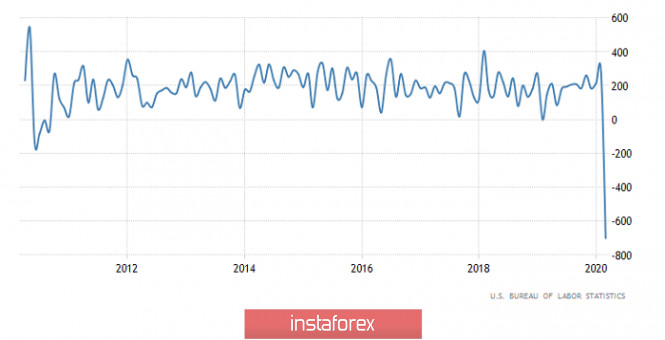 In fact, no serious data is published today, but those that have already been released have shown nothing good again. The index of business activity in the construction sector in Europe fell from 52.5 to 33.5. In Germany, it declined immediately from 55.8 to 42.0, which amid other data does not look so bad. Indeed, in France, it collapsed from 50.2 to 35.2. And in Italy, it's a general disaster, since the index of business activity in the construction sector literally collapsed from 50.5 to 19.9. It is believed that Markit itself was not even aware that indexes could reach such values. In addition, the volume of factory orders in Germany fell by 1.4%, so we will have to wait a very, very long time to wait for the restoration of industrial growth in Europe. 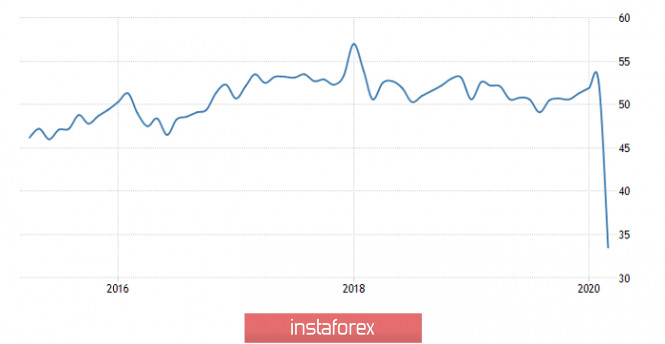 No less exciting events take place on Foggy Albion, where car sales, to put it mildly, plumped down by 44.4%. It can be noted that this is in annual terms. Moreover, the index of business activity in the construction sector decreased from 52.6 to 39.3. But the construction sector is directly related to the real estate market, which is traditionally the main criterion for the investment attractiveness of the British economy. 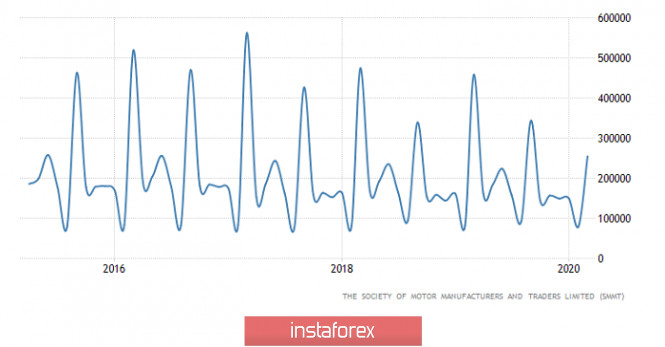 Nothing interesting is being published in the US today. In addition, investors froze in anticipation, as there are suggestions that the peak of the epidemic has already passed, and now hope to see a confirmation of a decline in the growth rate of new cases of coronavirus infection. In this case, the closest attention to Italy and Spain. So for now, the single European currency will hang around the level of 1.0775. 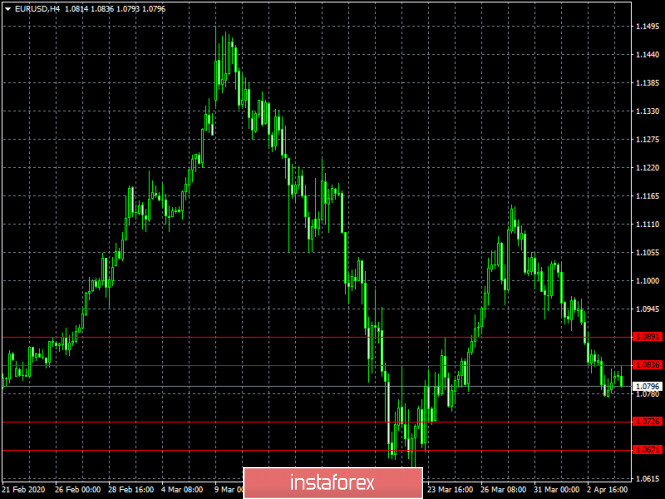 The situation is similar with the pound, the only difference is that 1.2275 is the reference point. 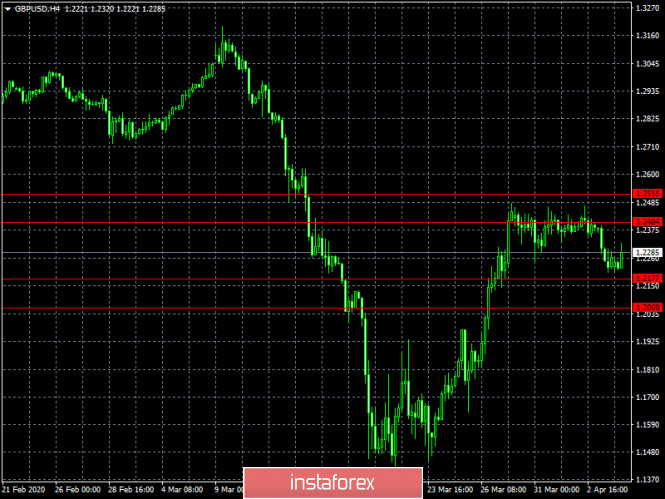