The Ladder Bottom is a bullish reversal pattern that serves to confirm a trend.

A chart shows three consequent lower closing prices on black days. The fourth candlestick indicates that the market trades above the opening price. The pattern appears when an obvious bearish trend is seen on the market. It shows that buyers are strong enough despite the fact that the market hits fresh lows at the close of trading. Next day the price shoots up and does not reverse its movement. The closing price on the last day is a bit higher than on the previous two days.

1. There are three black candlesticks with consequent lower opening and closing prices on a chart. This pattern is similar to the Three Black Crows.
2. The fourth candlestick is black with a shadow above it.
3. The last candlestick is white. The opening price is above the body of the previous candlestick.

Formation of the pattern

The market was trading downwards for some time and bears had the upper hand. Then, after a steep drop quotes rose above the opening price and almost reached the peak of the previous day. However, the market hit a fresh low at the end of the day.

Such dynamics on the market usually attracts sellers who clearly understand that the market cannot move downwards perpetually. Eventually, traders reconsider their short orders and if profits are satisfactory, they close deals on the next day. These actions result in a gap to the upside on the following day and the price closes at higher levels. A large trading volume on the last day is a sign of a trend reversal.

Possible scenarios of the pattern development

The Ladder Bottom pattern can be transformed into the bullish Hammer pattern.

The Ladder Bottom is formed just like the Concealing Baby Swallow pattern. The first three candlesticks of the pattern look like the Three Black Crows but in this case the bearish trend is seen on the market. 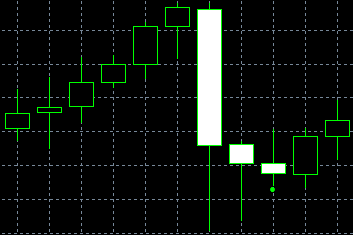