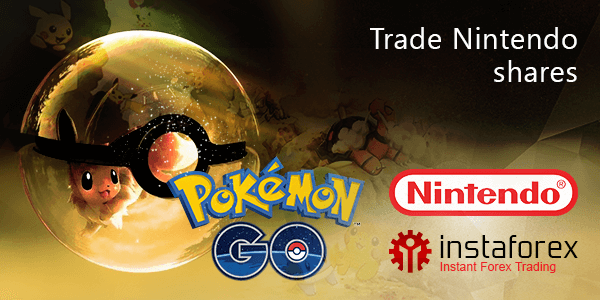 Nintendo is a Japanese company that developed into a video game company in 1978. Interest to the company rose sharply after the release of the Pokemon GO game in July 2016.

Hurry up to trade a new instrument, #NTDOY!

What is Pokemon GO and how is it linked to Nintendo?

Pokemon GO is a free multi-user location-based augmented reality game that has been developed by Niantic for iOS and Android and was launched on July 6, 2016.

Through a mobile device’s GPS, players can find, catch, battle, and train virtual creatures that appear on the screen as if they were in the real world.

Pokemon is short for ‘pocket monster’, which is a magic creature. Pokemon first appeared as a series of video games in 1996 and became the world’s best-selling video game franchise after Mario. In 1997, the game was adapted for the namesake anime television series, which also notched up remarkable success.

The Pokemon trademark belongs to Nintendo, one of the largest video game companies.


Why is it worth trading Nintendo shares?

Investors were encouraged by a surge in the game’s popularity and the next day after launch, July 7, Nintendo shares added 10%. On July 14, shares gained 50%.

Nintendo holds only a 32% stake in the company managing the Pokemon franchise and an unknown stake in Niantic. Still, even 30% of revenues generated by Pokemon GO made the Nintendo market value soar by a whopping $9 billion in just five days after the game release.

As of July 22, Nintendo shares skyrocketed by over two times and its market capitalization totaled 1.8 trillion yen ($17.6 billion). Deals on #NTDOY made up a quarter of all transactions on the Tokyo Stock Exchange.**


How to start trading Nintendo shares?

Now you have access to CFDs on Nintendo shares too (Now InstaForex clients have…). In the trading platform, these shares are recognized by the #NTDOY ticker symbol.***

CFD (Contract for Difference) is a contract on the difference between prices on an asset. The contract is made between a seller and a buyer under the meditation of InstaForex. CFDs are made on shares, bonds, stock indices, commodities, and currencies.

For example: Suppose you buy a CFD on Nintendo shares with 50 shares for $36 (total value - $1,800). In three days, the price edged higher to $41 per share. You can sell the contract with the new value of $2,050 and profit $250 minus a small commission charged for rollover.

* If you have further questions, please do not hesitate to contact the Customer Support Service. Besides, you can find answers to frequently asked question in the FAQ section.

** Such sharp surges are usually witnessed at the beginning of a project’s popularity. Further changes in asset prices can depend on various external and inner factors.

*** #NTDOY is one of the assets available for trading with InstaForex. You can find a complete list of available assets here.

Back to the list of articles
Can't speak right now?
Ask your question in the chat.