Envelope is a technical indicator typically formed by two moving averages that are drawn above and below the price range level. The upper and lower lines detach from the price level at a distance determined on the basis of the market volatility: the higher the current volatility, the greater the distance. Thus, envelopes are used for creation of flexible channels within which the price fluctuates most of the time.

The envelope indicator helps to determine the further price movement according to the following principle: after any fluctuations, the price always returns to the main trend. Many traders believe that this indicator is a variation of the famous Bollinger Bands. However, these two indicators are fundamentally different. The further the price departs from its channel, the more traders make profits, and the closer the moment when the price returns to the previous levels. 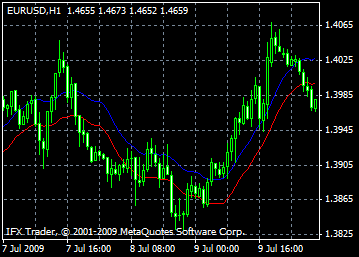 K/1000 - the value of shifting from the average (measured in basis points).