Pessimistic forecasts by the International Energy Agency caused Brent to collapse to the lowest levels since December 2018, however, the confident pace of global stock indices sowed serious doubts in the minds of investors about the damage to global oil demand. It is possible that we are talking about delaying demand, rather than destroying it. In the second quarter, China and the entire black gold market will return to normal life. Is there too much optimism about the coronavirus, which is most likely still at its peak?

According to the IEA, global oil demand in January-March will decrease by 435,000 b/d. This is the first decrease in the indicator since 2011. The forecast for the aggregate indicator for 2020 was reduced from 1.2 million b/d to 825,000 b/d. Citigroup estimates that demand for black gold from China may decrease by 3.4 million b/d in February and by 1.5 million b/d on average in the first quarter. These figures are a real disaster for the black gold market, while the modest decline in forecasts from OPEC (-400 b/d) looks like an attempt to give wishful thinking. 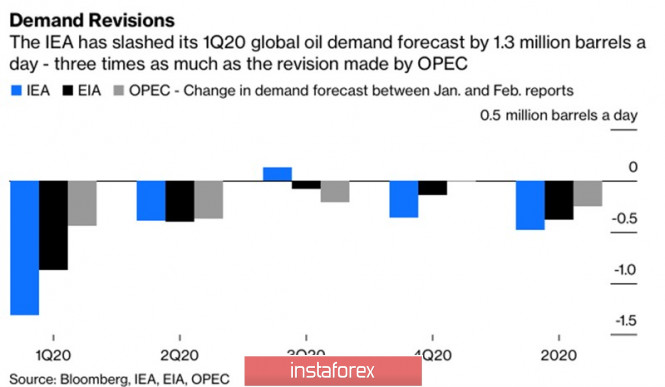 Perhaps investors understand that they have overdone the sales. By the end of the week to February 11, speculative net longs for Brent fell by 20%, for WTI - by 7%, and Goldman Sachs lowered its estimate of the average price for each of the two main varieties by $10 per barrel. In the end, the behavior of global stock indices does not indicate a crisis, but rather the well-being of the world economy. The faster the victory over the coronavirus is achieved, the faster the global demand for black gold is restored, the higher the chances of a rebound in Brent and WTI. Especially when OPEC reduces production.

The multidirectional dynamics of oil and the S&P 500 create a favorable ground for the strengthening of the US dollar, which, as a safe-haven asset, usually increases during periods of uncertainty and various kinds of shocks. As a result, black gold has another driver of the decline, which makes the bears' positions even less stable than before. If we add to this the growth of US oil reserves in the week to February 14 by 7.5 million barrels, which is more than twice the forecasts of Bloomberg experts, then the current short-term correction begins to look too weak to count on its continuation.

Technically, after Brent quotes reached the target of 113% to the red "shark" pattern, the probability of a pullback to the levels of 23.6%, 38.2% and 50% of the CD wave increased. The bulls managed to break through to the first resistance at $57.5 per barrel very quickly, but the upward movement did not receive a new impulse. A breakout of an important level will increase the risks of a correction to $60.15, $61.45 and $62.35. On the contrary, if the current resistance remains under the control of the bears, the chances of activating the 5-0 pattern and restoring the downward trend will increase.