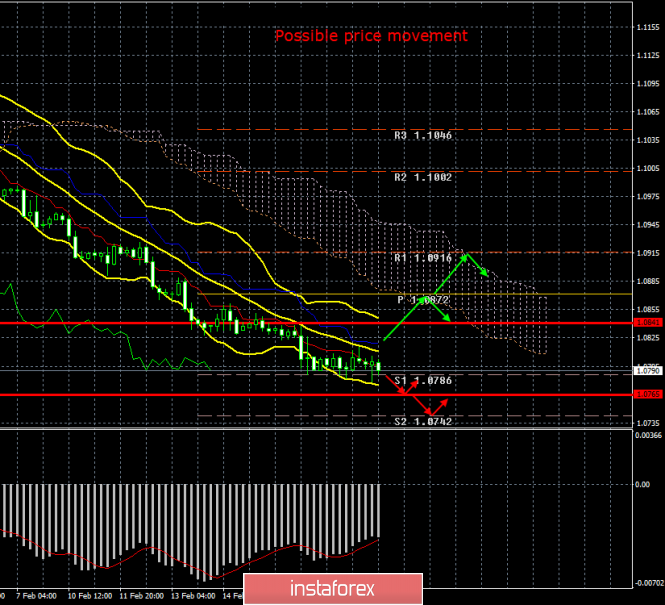 The average volatility over the last 5 days: 38p (weak).

The EUR/USD currency pair maintains a strong and long-term recoilless trend on Thursday, February 20, with weak daily movement and frank trampling in one place today and yesterday. Either the lack of important macroeconomic information, or the fact that the euro is reaching the bottom, but the pair continues to trade along the support level of 1.0786. After all, even though we have not seen a continuation of the downward movement for the second consecutive day, it is also impossible to say that the euro/dollar has started to adjust. There is still no upward correction, the 14th trading straight day. The MACD indicator continues to discharge, and traders are confused - what should they do next?

There really was little macroeconomic information today. Nothing was important. It is unlikely that any of the traders were interested in data on consumer confidence in Germany or inflation in France, or applications for unemployment benefits in the United States. These reports have the right to exist, but they never cause any reaction of market participants, except for absolutely fantastic cases. Thus, Thursday's macroeconomic background can be considered completely empty. In principle, the same conclusion could have been made without even looking at the calendar, one glance at the illustration of the pair's movement today would be enough ...

As a result, we have an absolute flat not even about 3-year lows, but directly on them. It is not known how much more the pair will trade around the 1.0786 level. Several more or less significant reports will be released tomorrow that could try to move the pair off the ground, and the degree of significance of these data does not allow us to suggest such an outcome with a high degree of probability. However, in any case, under current conditions, one should wait for news and economic publications. The volatility of the currency pair, by the way, again fell below the 40 mark and is now characterized as weak. 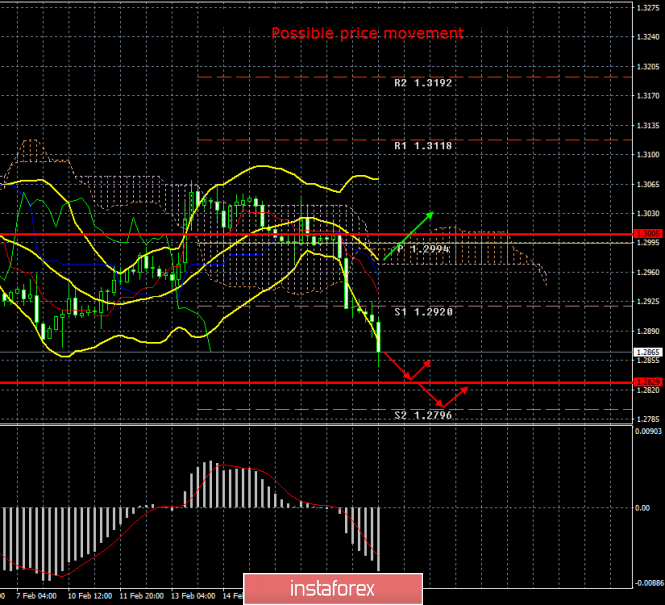 Average volatility over the past 5 days: 88p (average).

The GBP/USD currency pair continued its downward movement on February 20, which had begun the previous day. Now, the pound/dollar pair is clearly much more interesting than the euro/dollar. Firstly, we state a fact: after a series of unsuccessful attempts to overcome the upper line of the Ichimoku cloud - the Senkou Span B line - the pair completely logically resumed the downward movement. This is what we wrote about in our recent reviews, saying that the downward movement should resume almost anyway. Macroeconomic, technical, fundamental factors - all spoke in favor of a new fall of the British pound. And finally, traders could not stand it, and the British currency is pretty much cheaper against the US currency for the second straight day. Of course, now it's quite difficult to say exactly how long the recoilless fall will continue; according to the euro currency, it has been going on for three weeks already. However, the trend for the pound/dollar pair is again downward. Secondly, traders ignored relatively good macroeconomic statistics from the UK both yesterday and today. The pair was trading inside the Ichimoku cloud in those days when the fall would have been more logical, and yesterday and today, the pound fell when reports from Britain were not frankly disastrous or weak to provoke strong sales.

An indicator of inflation on Great Britain was published yesterday, which accelerated immediately to 1.8% in annual terms. Yes, as you and I found out, inflation fell by 0.3% in monthly terms, which, in essence, means deflation. That is, the annual indicator turned out to be simply irrelevant at this time, but in general, it should be noted that inflation did not fail. Even in monthly terms, the inflation rate was higher than forecast values, which predicted a greater decline. Retail sales data for January were published today, and it turned out that, although the growth rate of this indicator slowed to 2-year lows, real data still exceeded forecasts. In annual terms, the increase was 0.8%, and in monthly terms 0.9%. Also turned out to be stronger than forecast values, and data excluding fuel sales, +1.2% y/y and + 1.6% m/m. Even a more minor report on changes in the volume of industrial orders turned out to be negative, but at the same time higher than forecast values. However, none of the three macroeconomic reports was taken into account by traders, and the pound continued to fall today against the dollar, updating the lows of February 10.

From a technical point of view, it continues to move down, a new Dead Cross is formed, Bollinger Bands turned down. Macroeconomic statistics now have an indirect effect on the movement of the pair, so more attention should be paid to technical factors.

The EUR/USD pair is finally showing signs of the beginning of an upward correction. Thus, it is now recommended to wait until the 1.0786 level is overcome and resume selling the euro with targets of 1.0765 and 1.0742. It will be possible to consider buying the euro/dollar pair with low lots and the goal of a first resistance level of 1.0916, if traders manage to gain a foothold above the critical line. However, it is better not to risk it on such a strong downward trend.

GBP/USD continues to move down. Thus, it is now recommended to sell the pound with targets at 1.2829 and 1.2796 before the MACD indicator turns up. We recommend considering the pair's purchases with a target of 1.3118 if the Ichimoku cloud is overcome, but the fundamental factors remain on the side of the US dollar.