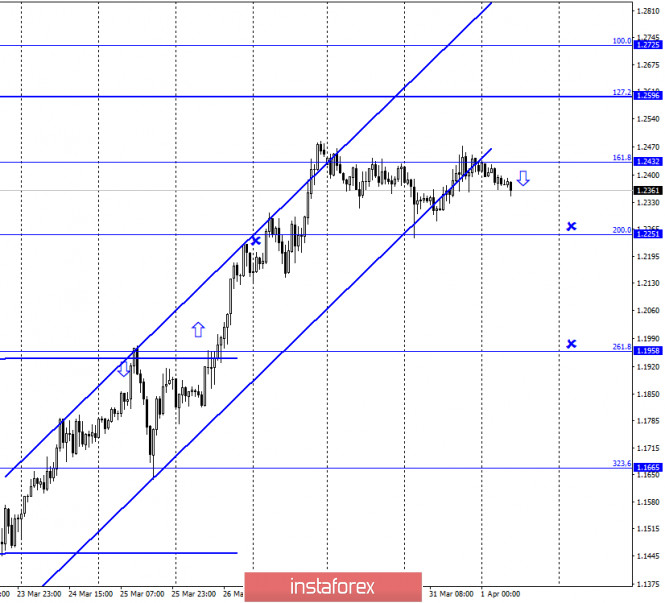 Hello, traders! According to the hourly chart, the GBP/USD pair rebounded from the corrective level of 200.0% (1.2251), turned in favor of the British and rose to the corrective level of 161.8% (1.2432). However, this level was followed by a rebound with a reversal in favor of the US currency and a new fall in the direction of the Fibo level of 200.0%. The pair's quotes also closed under the upward trend corridor, so there were the first signs that the global mood of traders changed from "bullish" to "bearish". In principle, the same thing is observed for the EUR/USD pair. And in our case, we also need confirmation of the readiness to include bear traders in the fight. 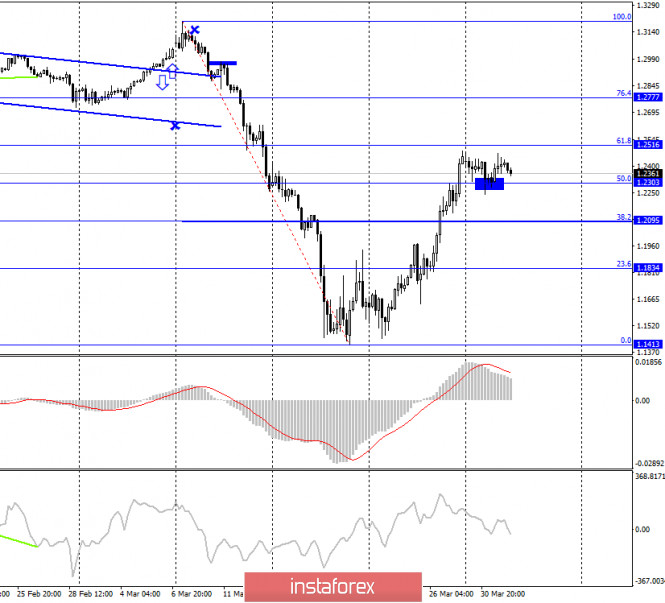 As seen on the 4-hour chart, the GBP/USD pair rebounded from the corrective level of 50.0% (1.2303) and some growth in the direction of the Fibo level of 61.8% (1.2516). However, today, it resumed the process of falling towards the same level of 50.0%. A new rebound of quotes from this level will again work in favor of the British currency and resume the growth process in the direction of the corrective level of 61.8% (1.2516). Fixing the pair's exchange rate under the Fibo level of 50.0% will increase the probability of continuing the fall of the US dollar and will confirm the signal from the hourly chart to close under the ascending corridor. Today, the divergence is not observed in any indicator.

On the daily chart, the picture remains the most interesting. The GBP/USD pair, after rebounding from the corrective level of 127.2% (1.1538), closed above the Fibo level of 76.4% (1.2327). Thus, there is a high probability of further growth in the direction of the next corrective level of 61.8% (1.2553) until the quotes are fixed under the Fibo level of 76.4%. After a fairly strong growth of the British dollar in the last 8 days, a correction is possible. But for its definition, bear traders should close under the correction level of 76.4%.

On the weekly chart, the pound/dollar pair performed a false breakdown of the lower trend line. Thus, until the pair's quotes are fixed under this line, there is a high probability of growth in the direction of the two upper trend lines.

On Tuesday, the UK released a report on GDP for the fourth quarter, which showed an increase of 1.1% y/y. However, it did not arouse any interest among traders. There was even less news in the US. The COVID-2019 virus epidemic continues to attract all the attention. Traders remain in a state of shock, as events in the world do not allow them to relax now. Oil continues to hit anti-record values, US stock markets have recovered slightly, and the epidemic continues to spread.

The economic calendar for the US and the UK:

Today, April 1, the information background will be important. This applies to both the UK PMI and the ADP report in the US. For now, the British pound is inclined to fall, but much will depend on today's statistics. 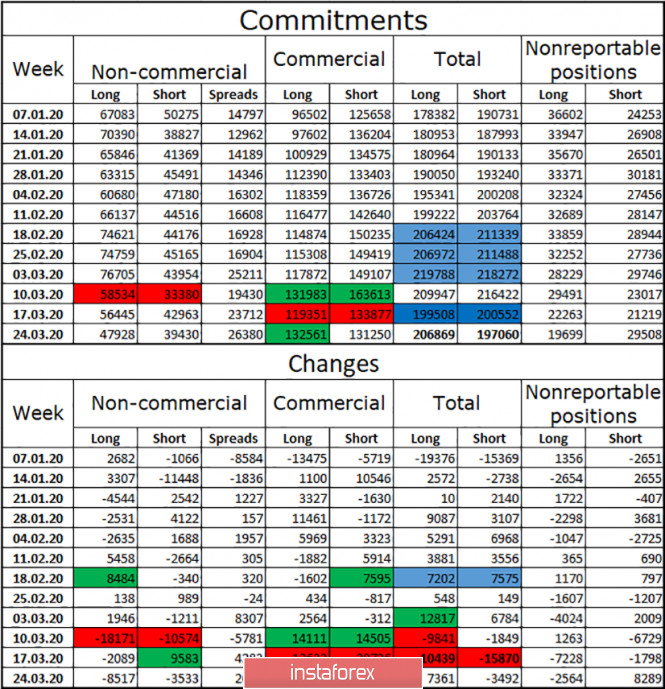 A new COT report showed a reduction in the total number of short contracts and an increase in long contracts. The total number of long contracts among the major market players now exceeds the number of short contracts, which preserves good prospects for the growth of the British pound in the future. The British pound now needs a downward correction. Thus, the general mood of major players remains "bullish", but do not forget about graphical analysis and remember that COT reports are not indicators that predict the movement of the currency.

Forecast for GBP/USD and recommendations to traders: