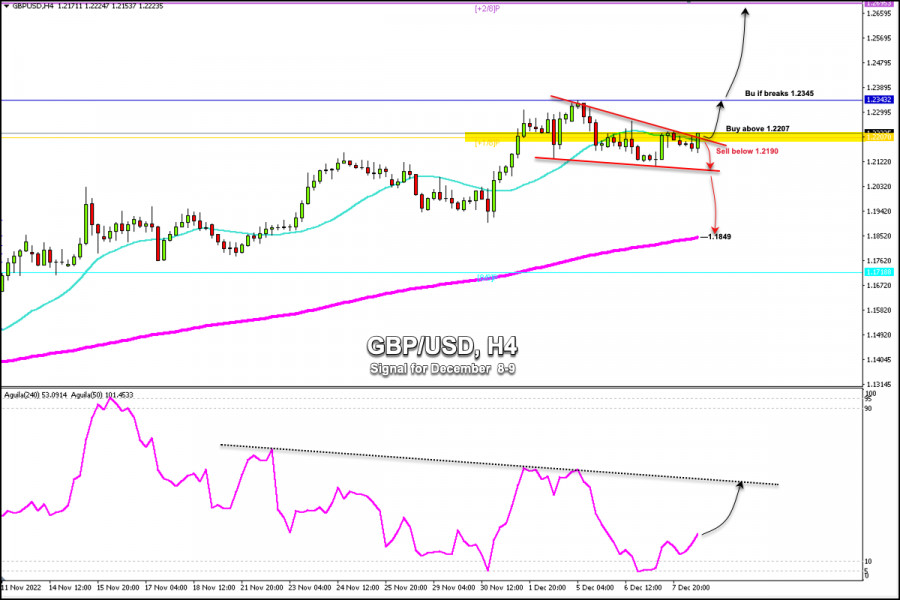 Early in the American session, the British pound (GBP/USD) is trading above the 21 SMA and above the +1/8 Murray with bullish strength. In addition, we can see that the British pound is breaking the symmetrical triangle pattern which has been developed since November 30.

The fall in yields on US Treasury bonds due to the increase in risk aversion and concerns about an economic recession coming from China, caused the dollar to weaken, which benefitted the GBP/USD pair. It is likely to continue its rise in the next few hours and it could reach the resistance of 1.2345 and up to the psychological level of 1.25.

On the downside, if GBP/USD trades below 1.2190 (21 SMA), it could favor a fall in the GBP/USD pair and it could reach the bottom of the symmetrical triangle pattern around 1.2095.

A sharp break below this support could accelerate the decline to the psychological level of 1.20 and even to the 200 EMA around 1.1849. Should GBP/USD manage to recover to 1.2200 and stabilize above that level, it could lead to a bounce towards 1.2345 and up to 1.25.

Since December 6, the Eagle indicator is giving a positive signal, which is likely to support the strength of the GBP/USD pair and the price may extend its rise in the coming hours and until the publication of inflation data, which will be released tomorrow during the American session.

Please take into consideration that bullish breakout above 1.2340 will probably enable further advancement towards 1.2700. On the other hand, another bearish pullback at least towards the price levels

The market has remained under buying pressure until a plateau level occurred around 1.0800-1.0850. This was followed by a significant SELLING price action leading to the ongoing price decline

The USD/JPY pair crashed in the short term and now is located at 131.34 at the time of writing. After its strong growth, a temporary retreat was natural and expected

Forecast for EUR/USD on February 7. The euro might decline even further

On Monday, the EUR/USD pair maintained its downward trend and fell below the level of 1.0750. As a result, the decline in quotes can now be carried

Forecast for GBP/USD on February 7. Traders are waiting for Powell's speech and "hawkish" statements

The GBP/USD pair continued to decline on Monday, as it was discovered close to the 1.2007 level, according to the hourly chart. The British pound gained little as the quotes

GBPUSD is in a short-term bearish trend. Price is trading at 1.1980 making new lower lows and lower highs, approaching our short-term target of 1.19-1.18 after it broke below

Gold price is trading around $1,870. Short-term trend is bearish after the recent break down from last week. Price is now forming a triangle pattern clearly visible

Early in the American session, gold is trading around 1,867.25. We can see that it is trading within a symmetrical triangle pattern formed on February 3. According to the 4-hour