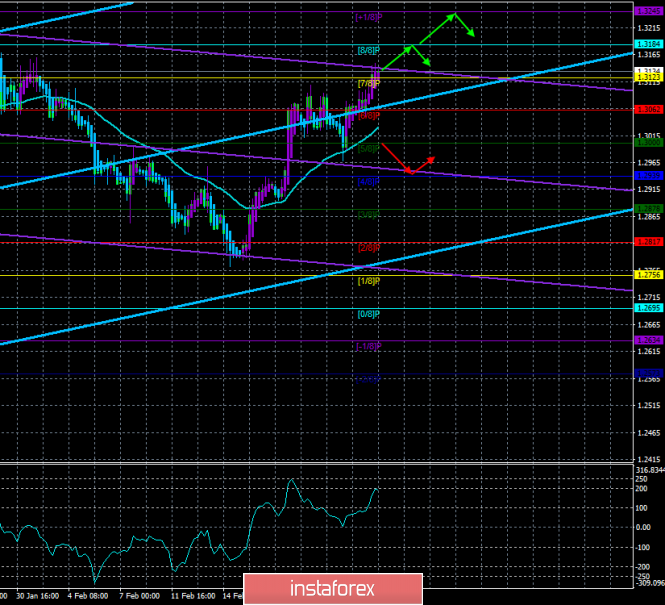 The currency pair GBP / USD resumed the upward movement. Theresa May, in response to the initiative of some members of parliament to dismiss her in May 2019, announced that she was not going to resign, and Brexit was not her only mission. In this interview, May also focused on the date of March 29th. However, the following message from London says that Theresa May is ready to ask the EU to postpone the Brexit date for two months if parliament blocks its agreement by voting on March 12. The European Union itself is ready to transfer the date of the "divorce" to the year, that is, to 2021. Thus, it appears that all the threats to May about the disordered Brexit are nothing more than a bluff. Premier understands that the "hard" version of Brexit is not needed by anyone. Previously, she used it to pressure parliamentarians who did not want to accept her Brexit plan. Now, it becomes clear that the parliament is not in the wake of May, so you need to postpone the country's withdrawal from the EU and continue negotiations with the EU. Although, from our point of view, in two months, it is hardly possible to solve all the problems that the parties had not been able to solve in two years. Given the EU's willingness to postpone Brexit for two years, the whole situation looks like the unwillingness of at least one of the parties to bring the divorce process to the end. Laborites are already proposing to hold a new referendum on the country's future stay in the EU. Today in Labor, Labor leader Jeremy Corbyn will come up with his alternative Brexit plan, as well as make a number of demands on a deal with the EU.

The pair GBP / USD resumed its uptrend. Now are valid purchase orders with the aim of 1.3184. The expected downward reversal has not yet occurred, and Heikin Ashi paints the bar's purple, so the upward trend continues.

Short positions are recommended to open if the pair overcome the moving. In this case, the trend in the instrument will change to downward, and the first goal will be the Murray level of 1.2939.

The junior linear channel is the purple lines of the unidirectional movement.