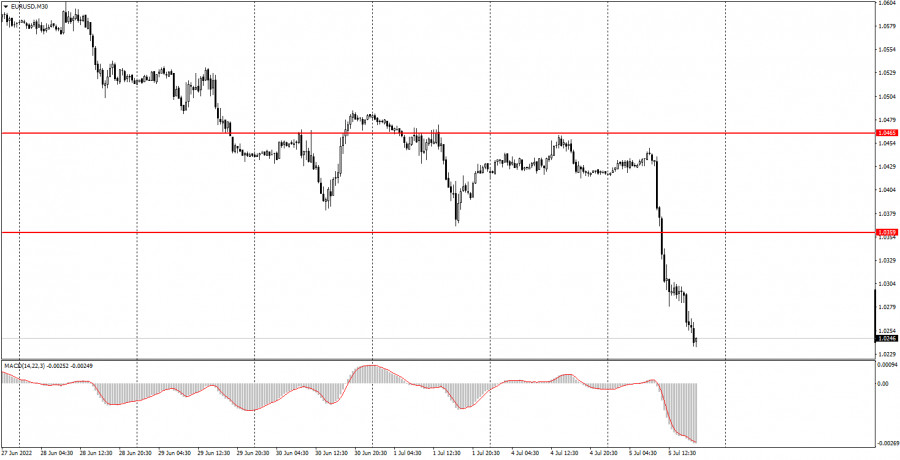 The EUR/USD currency pair, for no reason, collapsed on Tuesday. In principle, we have repeatedly said in recent articles that the pair can resume its downward movement at any moment and overcome the levels that kept it from updating 20-year lows. It happened rather unexpectedly, given that the most important events of this week are scheduled for its end. Therefore, immediately after Independence Day in the United States, few people expected the euro to fall by 180 points on Tuesday. Especially considering the fact that important macroeconomic statistics were not published today. A single report on business activity in the EU services sector, and even then only its second assessment, was hardly capable of provoking a movement of 180 points. Thus, we are inclined to believe that the whole point is that the market has long been set up for new short positions on the euro. And to be more precise, its mood has not changed lately. Yes, we saw a slight correction in the last few weeks, but after it became clear that there was no sign of an upward trend now, there was nothing left to do but to resume the downward movement. 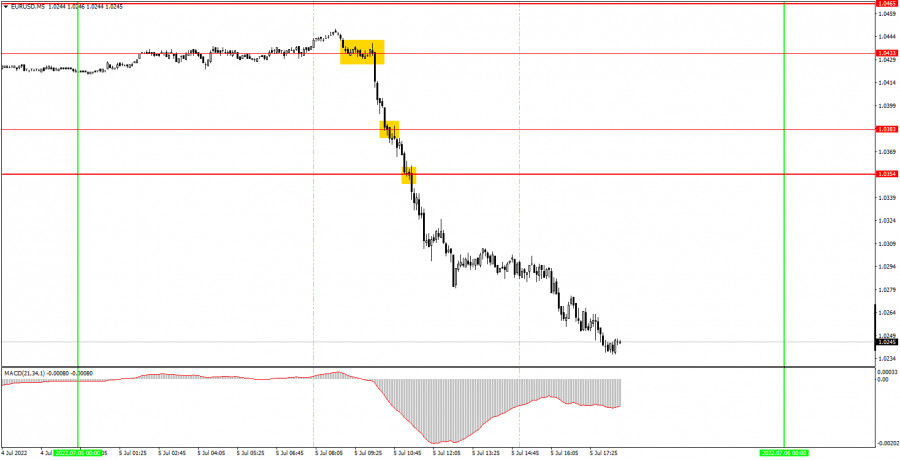 Few trading signals were formed on the 5-minute timeframe today, but they were all just great. We once again remind novice traders that a trend is very good and it is very pleasant and profitable to trade on it. We have seen movement in only one direction all day. Therefore, only sell signals were formed. The very first signal near the level of 1.0433 should have been worked out with a short position. Further, the price passed the levels of 1.0383 and 1.0354, but there are simply no lower levels, since the pair has not been at these price values for more than 20 years. Since the buy signal was not formed during the day, the short position had to be closed manually in the late afternoon. Profit on it amounted to at least 170 points, with which we congratulate the newcomers.

The new downward trend continues on the 30-minute time frame, but there is still no trend line or channel. The fall on Tuesday was very strong, but this does not mean that now the pair will trade this way every day. Although, given that today there were no grounds for such a fall, we assume that the euro could fall sharply on Wednesday and Thursday. On the 5-minute TF on Wednesday, it is recommended to trade at the levels of 1.0354, 1.0383, 1.0433. When passing 15 points in the right direction, you should set Stop Loss to breakeven. The European Union will publish a report on retail sales, which is unlikely to have at least some significance for the market now. On the other hand, the US ISM index will be published for the services sector, which has a better chance of being worked out, but if the euro's collapse continues, then this report will have no meaning.