One of the most prestigious WTA tournaments - the VTB Kremlin Cup 2018 brought to Moscow the whole bunch of the shining stars of the world Tennis. Instaforex Brand Ambassador Daria Kasatkina who has already won the title in 2015 in double together with Elena Vesnina was determined to repeat the success in singles this time. However, the list of players, which included the leader of the world rating Simona Halep, as well as the other top-10 players like Sloane Stephens, Karolina Pliskova, and others was promising a very tough competition.

Kasatkina did not have any problems with entering to the second round, however, it was an end of an easy way. In the second round Daria was to meet the French player Alize Cornet. The Russian lost the first set and was close to lose the second one when the help came from her coach - Phillip Dehas from Belgium. Phillip is famous for his motivational speeches and this time he was able to find the right word yet another time. He compared Daria with the great Chinese wall with one change - Daria was supposed to become a Russian wall. This speech helped Daria to get transformed into powerful shellproof wall and beat the opponent in 3 sets - 3:6, 7:5, 6:4.

After that Daria had to play against the compatriot Anastasia Pavlyuchenkova and Johanna Konta from Great Britain (Daria won both games with the same score - 6:4, 6:3) and entered the final where she faced powerful Tunisian player Ons Jabeur. The Tunisian player had a fantastic start. The Tunisian won the first set - 6:2 and took the lead (4:1) in the second. Once again the right words from the coach have turned the game upside down. Kasatkina has pulled out the second set on tie-break and secured the victory in a deciding set (6:4) and took the Kremlin Cup. This victory helped Daria to enter the WTA top-ten list!

InstaForex congratulates Daria with such an important victory. The Russian has been an ambassador of the company for more than a year and there are grounds for believing that the main triumphs are yet to come! 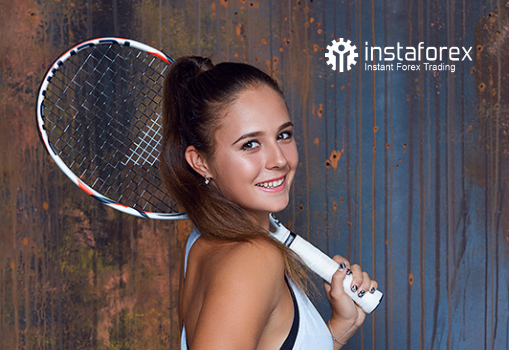