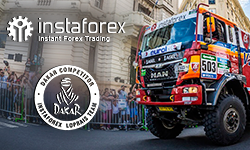 On January 11, the 8th stage of the 2015 Dakar Rally came to an end. Despite the loss of time because of navigation mistakes, InstaForex Loprais Team managed to finish fourth losing 20 minutes to the leading crew Kamaz Master.

After a bold start and five successful stages, the truck of Ales Loprais stuck in dunes. Only with the help of the other crew, the team was lucky to get to the finish line. However, InstaForex Loprais Team showed great determination and a burning desire to win during the 7th stage of the 2015 Dakar Rally and finished first, thus closing the gap on Kamaz Master, the leader in the overall standings.

After the day-off, the crew of Ales Loprais has five more stages of the 2015 Dakar Rally ahead of them. Regardless of difficult tracks, they hope to make up for lost time and jostle for a prize place.

InstaForex team offers all clients, partners, and colleagues the heartiest congratulations on the most enjoyable family holidays, Christmas and New Year’s Eve!
Please pay attention to the changes in trading hours during Christmas and New Year's Eve holidays
InstaForex Loprais Team, a well-known race team and a regular participant in the annual Dakar rallies, will feature in the official video game series
The best time of the year is almost here.
We would like to inform you on the expiry dates of futures contracts in December 2021
Legendary German football club Borussia Dortmund and InstaForex have prolonged their partnership
View more
Can't speak right now?
Ask your question in the chat.