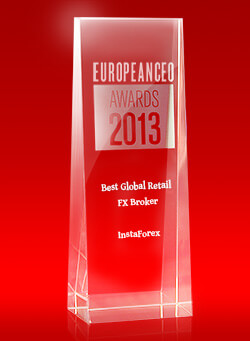 In autumn 2013, European CEO Awards, reputable in the financial world authority acknowledged InstaForex as the Best Global Retail FX Broker 2013. The international European CEO Award was established a few years ago by the European CEO, the popular British magazine about business and economics that specializes mainly in publishing articles targeted at top managers of middle and large-sized European companies. It has been the second time in the award’s history that the judging panel handed over the trophy to InstaForex, thus marking the broker’s deserts and success in retail forex. It should be reminded that back in 2011, European CEO Awards adjudged InstaForex the Best Retail Forex Broker trophy.

Now in 2013 as in 2011, apart from InstaForex advances on the retail forex market, the European CEO Awards organizers and judging panel appreciated the company’s contribution to the forex market development as a whole, besides they recognized frequent implementation of new trading technologies. The Best Global Retail FX Broker prize has become the third high-status award for InstaForex in 2013. This underlines the ongoing company’s development affirmed by the independent awards and show events. A great number of awards delivered to InstaForex indicates that the broker’s services are much-in-demand on the market and they are recognized not only by clients, but both by experts and market’s participants.

Reference: The European CEO magazine is a distinguished British journal. It is published in Europe and enjoys a sound readership comprising top-managers of medium and large-sized European companies, financial, and economic wizards. The European CEO magazine stands out among competitors by publishing a wide range of meaningful current news and events taking place on the world financial market. The reading audience of both printing editions and online versions embraces over 100,000 people around the world.