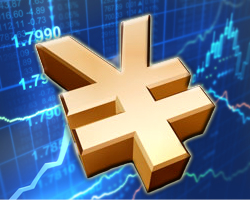 The Japanese yen slipped against its major counterparts in the Asian session on Wednesday amid rising risk appetite, as most Asian shares rose following the overnight gains on Wall Street in a late-stage rally.

Concerns over a trade war eased a bit after U.S. President Donald Trump held out the possibility of a trade deal with China.

Trump predicted that the U.S. will reach a "great deal" with China, although the president warned of more tariffs if a deal is not possible.

"I think that we will make a great deal with China and it has to be great, because they've drained our country," Trump told Laura Ingraham of Fox News on Monday.

In economic news, the Bank of Japan maintained its monetary stimulus, as widely expected.

The policy board of the BoJ decided to purchase government bonds so that the yield of 10-year JGBs will remain at around zero percent.

The board retained the -0.1 percent interest rate on current accounts that financial institutions maintain at the bank.

The BoJ will conduct purchases of Japanese government bonds in a flexible manner so that the outstanding amount will increase at an annual pace of about JPY 80 trillion.

Looking ahead, German retail sales for September, Swiss economic sentiment index for October, Eurozone jobless rate for September and advanced consumer inflation data for October are due in the European session.

At 8:15 am ET, ADP private payrolls data for October is set for release.

In the New York session, Canada GDP data for August and industrial product price index for September, as well as Chicago PMI for October are scheduled for release.