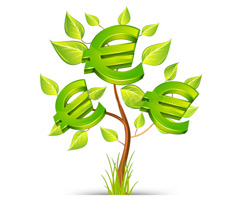 The euro drifted higher against its major counterparts in the European session on Monday, as German business sentiment improved in May and European Central Bank President Christine Lagarde said that the central bank is planning to exit negative interest rates by the end of the third quarter.

In a blog post, Lagarde said that the central bank is expected to end net purchases under the APP very early in the third quarter.

A lift-off in the interest rate is likely at the meeting in July, in line with the forward guidance, Lagarde told.

"Based on the current outlook, we are likely to be in a position to exit negative interest rates by the end of the third quarter."

Survey results from the Ifo institute showed that Germany's business climate index rose to 93.0 points in May from a revised 91.9 points in April. Economists had expected a score of 91.4.

The World Economic Forum's annual meeting will be held in Switzerland this week after a gap of two years amid the Covid-19 pandemic.

Business and political leaders will be gathering in Davos, where Ukraine and its war with Russia would be at the top of the agenda.