Analysis of EUR/USD and GBP/USD for January 20. Inflation in the eurozone does not allow the euro to "breathe" 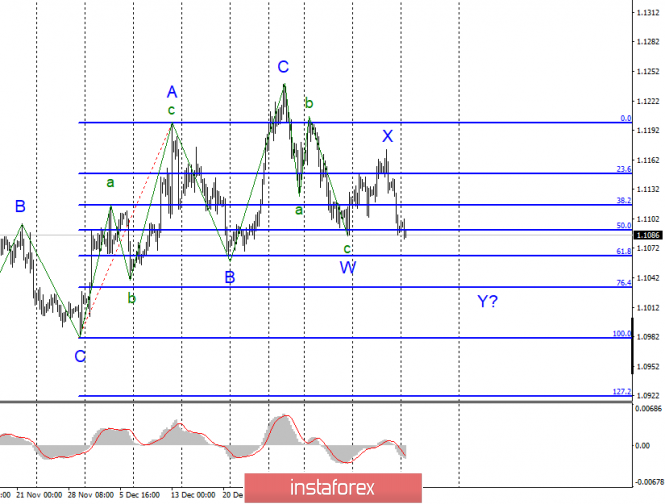 On January 17, the EUR/USD pair lost about 45 basis points and thus continues to build a new downward wave, which is identified in the current complex wave markup as Y. The current set of waves is likely to consist of 3 down waves. Recently, the euro-dollar instrument has been moving mainly in three-wave structures. If this is true, then the decline in quotes will continue with targets located near 61.8% and 76.4% of Fibonacci.

The news background for the tool on Friday was quite important. Markets had to find out whether inflation in the eurozone would improve in December or remain at the same level. Unfortunately, the euro area still shows little sign of accelerating the economy, and, in particular, the ECB's most worrying inflation remains at very low levels. In December, consumer prices in the euro area increased by 1.3% compared to December a year earlier. The annual increase in prices of just over 1% is very small, this does not allow the ECB to talk about the possibility of tightening monetary policy. Moreover, a few months ago, inflation was falling to the value of 0.7% y/y, so now we can still regard the current value as relatively high. In any case, there is only one sense: inflation is so weak in the eurozone that demand for the euro currency fell again on Friday. Unfortunately, the economic reports from America also did not particularly please the currency and stock markets. Industrial production fell by 0.3% in December, although markets had expected a reduction of no more than 0.2% m/m. Industrial production – not the strongest report and did not cause a decrease in demand for the US currency on Friday, however, this is not the first drop in production in America. The University of Michigan consumer confidence index was also worse than market expectations – at 99.1. Given the fact that the news background from America and the European Union is not too different now, after the completion of the current wave structure, we can expect the construction of new three waves to the top.

The euro-dollar pair is presumably continuing to build a downward set of waves. Thus, I would recommend continuing to sell the instrument with targets located around 1.1034 and 1.0982, which corresponds to 76.4% and 100.0% of Fibonacci. 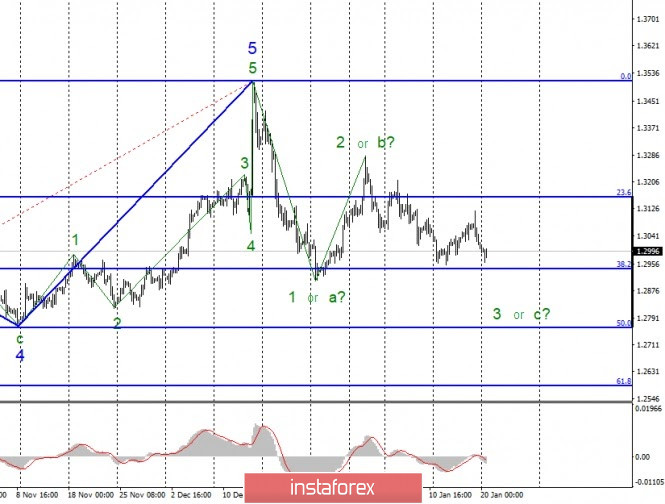 The GBP/USD pair lost 65 basis points on January 17 but also continues to remain inside the new downward trend, which can turn out to be both 3-wave and 5-wave. Even if the 3-wave option is implemented, the decline in quotes should continue in the direction of the 50.0% Fibonacci level. Regular waste of quotes from the reached lows slightly complicates the internal structure of wave 3 or C. An unsuccessful attempt to break the 38.2% Fibonacci level may lead to another withdrawal of quotes from the reached lows.

The news background for the GBP/USD instrument on Friday, as usual, was disappointing. Markets didn't even wait for economic reports from America. Having received information about retail sales in Britain in the morning (0.9% y/y, -0.6% m/m), they rushed to sell the British pound again. Thus, in short, the situation is as follows: the Bank of England is preparing to lower the key rate (it remains only to understand how soon this will happen), economic reports from month to month continue to indicate a fall in the British economy, the country is facing difficult negotiations on future trade relations with the European Union. The UK's financial sector continues to suffer. Due to the country's exit from the EU, foreign investment has sharply decreased, some companies have closed their production facilities on British soil, and some are considering such a step. Much will now depend on whether Brussels and London can agree. If there is a deal, it will mitigate the negative effect of Brexit. If there is no deal, it will essentially be called a "hard" Brexit. In any case, the news background remains a factor that exerts strong pressure on the British currency.

The pound-dollar tool continues to build a new downward trend. I recommend selling the instrument again with targets located around the mark of 1.2764, which corresponds to the 50.0% Fibonacci level. A successful attempt to break the 38.2% level will indicate that the markets are ready to continue selling the British currency.