Will the dollar stop plan B?

All attempts by the Fed to rein in the US dollar were futile. Neither a sharp reduction in the federal funds rate, nor the launch of unlimited purchases of Treasury and mortgage bonds under QE, nor the transfer of liquidity to foreign central banks using swaps and repos has dampened investors' interest in buying the USD index. If this continues, I am afraid that currency interventions will be necessary. According to BofA Merrill Lynch, this will happen when the EUR/USD pair falls to 1.05.

In theory, this scale of dollar liquidity and the rapid expansion of the Fed's balance sheet should have knocked the "American" down. Nevertheless, the number of supporters of the "dollar smile" theory is growing rapidly. It assumes that at the first stage, the USD index is strengthened due to the strength of the US economy and the associated inflow of capital to the US securities market. When a recession begins, the dollar peaks as investors flee to safe-haven assets. Then, thanks to those who want to save stock indices from falling into the abyss with the help of aggressive monetary expansion, the Fed forms the bottom of the smile. After that, the dollar begins to grow again, as rumors increase in the market that the States will cope with the decline faster than all other countries.

Currently, the USD index is moving to the third stage, so the potential for a downward movement on EUR/USD looks decent. In order to prevent a serious revaluation of the "American", we need an additional fiscal stimulus from the White House and, most likely, currency interventions.

It should be noted that the reverse correlation of the S&P 500 and the dollar increases against the background of the recession. The latter is used as the primary safe-haven asset that makes actual purchase in case of return of the stock index to a downward trend. The Fed also contributed to strengthening the relationship. Its swap and repo operations have significantly reduced the cost of hedging purchases of securities issued in the United States. Now non-residents have an excellent opportunity to ensure the risks of investing in US stocks by selling futures on the USD index.

Dynamics of the cost of hedging purchases of US assets 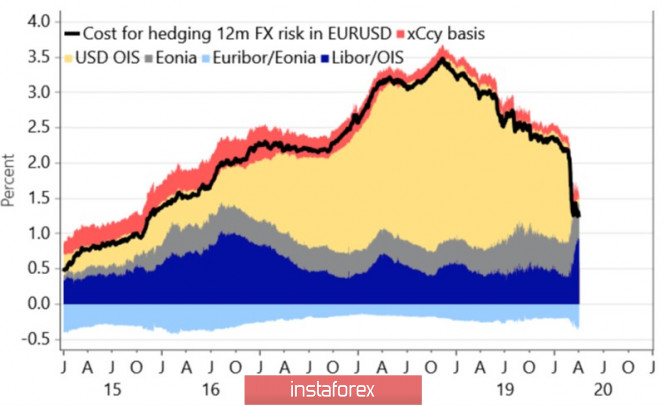 Thus, the White House, which probably does not like the strengthening of the dollar, has two main plans. Plan "A" involves using all possible tools for the growth of the American stock market, including additional fiscal stimulus. Plan "B" is a foreign exchange intervention. Donald Trump has already hinted at increasing infrastructure investment by $2 trillion, which will be funded by issuing bonds. Low, almost zero cost of borrowing, according to the US President, allows us to implement this program quickly and cheaply.

In my opinion, without an improvement in the epidemiological situation in the States, which will allow us to start the process of economic recovery, we should not count on the S&P 500 rally. At best, the stock index will enter a state of consolidation, at worst, it will restore a downward trend. In this regard, sales of EUR/USD with a target of 1.05, prompted by the AB=CD pattern, look relevant.