GBP/USD. April 6. COT report: speculators are getting rid of positions on the British pound. Three signals to sell the pair. Bears should hold below the level of 1.2327 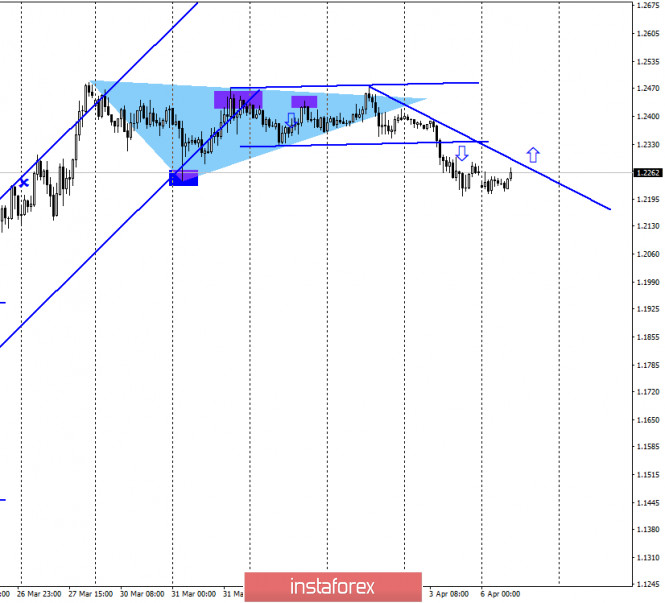 Hello, traders! According to the hourly chart, the GBP/USD pair performed a consolidation under the side corridor, which was quite weak and not long in time. Nevertheless, this close gave a signal to bear traders about the readiness of quotes for a new fall. If you look at the older charts, the option with a fall in the rate of the pound/dollar pair really looks the most attractive. I have built a new downward trend line that now defines the mood of traders as "bearish" and supports traders to go down. Closing the pair's quotes above this line will work in favor of the English currency and indicate that the initiative is intercepted by bull traders. By the way, in the current situation, it should also be taken into account the fact that all market traders persistently do not want to trade in accordance with the information background. On Friday, a whole package of statistics from the US could cause strong sales of the US currency. But instead, the dollar was growing again. 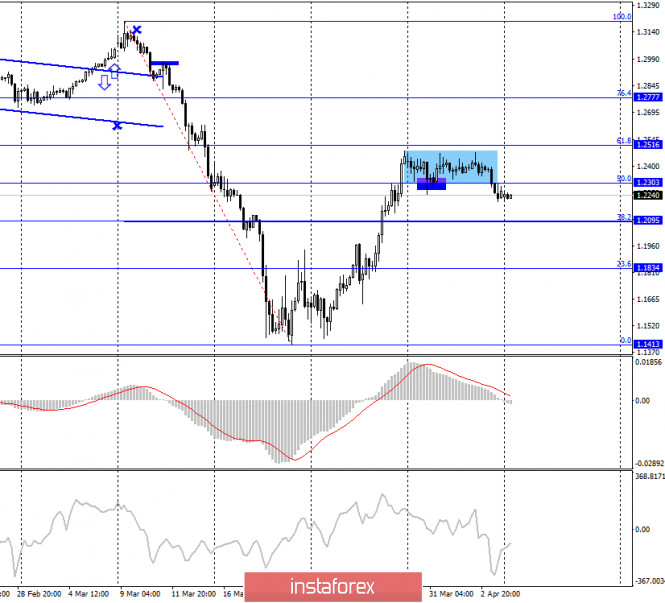 As seen on the 4-hour chart, the GBP/USD pair left the area of no trend, indicated by a blue rectangle. It also performed fixing under the corrective level of 50.0% (1.2303). Thus, a reversal was made in favor of the US currency and the chances of resuming the fall of quotes in the direction of the Fibo level of 38.2% (1.2095) were increased. Thus, we have a second signal to sell the British. Fixing the pair's exchange rate above the Fibo level of 50.0% and above the trend line on the hourly chart will cancel the sales signals, but this has not happened yet. The CCI indicator has several pending divergences, but I think they are quite inaccurate and not worthy of attention.

On the daily chart, the pair performed a reversal in favor of the US dollar and anchored under the corrective level of 76.4% (1.2327). Thus, the fall in quotes can be continued in the direction of the next corrective level of 100.0% (1.1959). On the third chart out of three, we have a sales signal. The information background now does not support either bears or bulls, however, the general mood remains "bearish", and the US dollar may regain the status of a protective asset. In this case, the US currency will grow, no matter what.

On the weekly chart, the pound/dollar pair performed a false breakdown of the lower trend line. Thus, until the pair's quotes are fixed under this line, there is a high probability of growth in the direction of the two upper trend lines. This is the only chart that tends to increase the pair. But since it is long-term, the option with a fall and a further resumption of growth is allowed.

On Friday, the UK released the PMI for the services sector, which was 34.5, which is worse than traders' expectations. But American statistics also disappointed even the most ardent optimists. The unemployment rate jumped immediately by 0.9%, and the number of Nonfarm Payrolls fell to 10-year lows. Nevertheless, it was the US dollar that grew on Friday, which once again proves the weak influence of the information background on the mood of traders.

News calendar for the US and UK:

As of April 6, the UK and US news calendar does not contain any important reports or events.

Today, traders will have nothing to pay attention to. 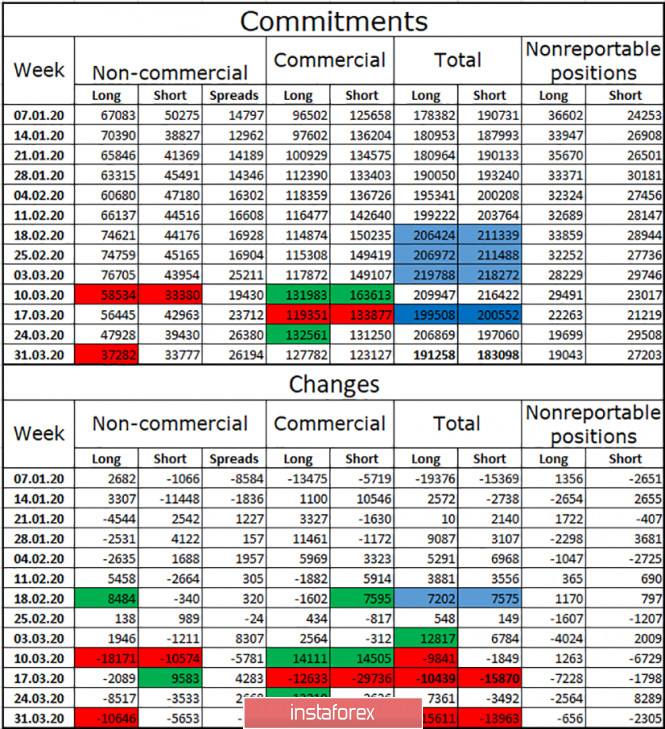 On Friday, a new COT report was released and it again showed a reduction in the total number of contracts in the hands of major market players. Long positions lost 15,000, and short positions - 14,000. Thus, the British pound continues to lose interest among traders. The overall ratio of long and short contracts remains in favor of the first type. But since the report affects the last date of March 31 (the date when the next growth process ended), it is now more likely that the quotes will fall. Speculators, by the way, do not like the British pound at all. The number of contracts concentrated in the hands of the "Non-commercial" group is extremely low. Speculators now do not consider the pound an attractive currency for profit.

Forecast for GBP/USD and recommendations to traders:

I believe that now we should sell the GBP/USD currency pair, which is supported by four factors at once (three sales signals and the COT report). The goal is 1.2095. I recommend buying the British currency after fixing the quotes above the trend line on the hourly chart and above the level of 50.0% (1.2303) on the 4-hour chart. The goal is 1.2516.