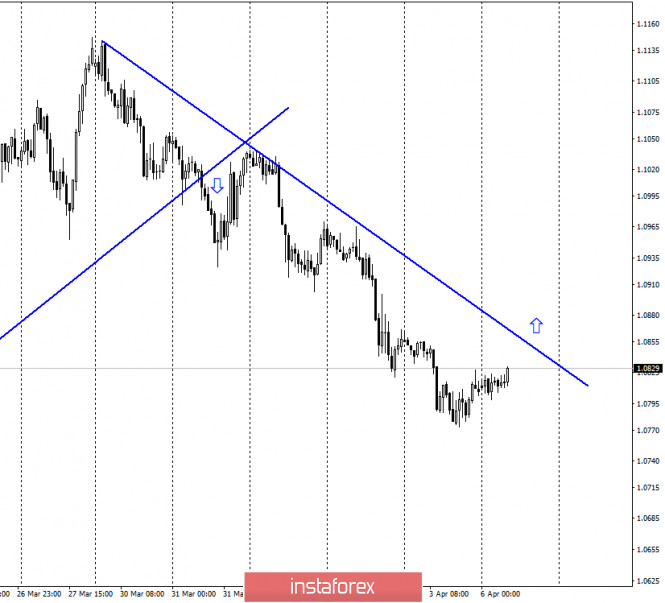 Hello, traders! On the hourly chart, everything goes according to plan. The EUR/USD currency pair continues to fall with infrequent corrections. The downward trend line continues to characterize the current mood of traders as "bearish". Thus, I believe that the fall in the pair's quotes can be continued after a short pause. Rebound from the trend line will work in favor of the US currency and the resumption of falling quotes. Closing the pair's rate above the trend line will be the first signal to resume the growth of the euro currency. On Friday, the US dollar continued to rise in value, despite a large number of economic reports from America, most of which were extremely weak. Nevertheless, the demand for the US currency remains quite high. Traders were not impressed with the information about the unemployment rate and Nonfarm Payrolls. This means that traders' trading strategies do not currently contain strict adherence to the information background. 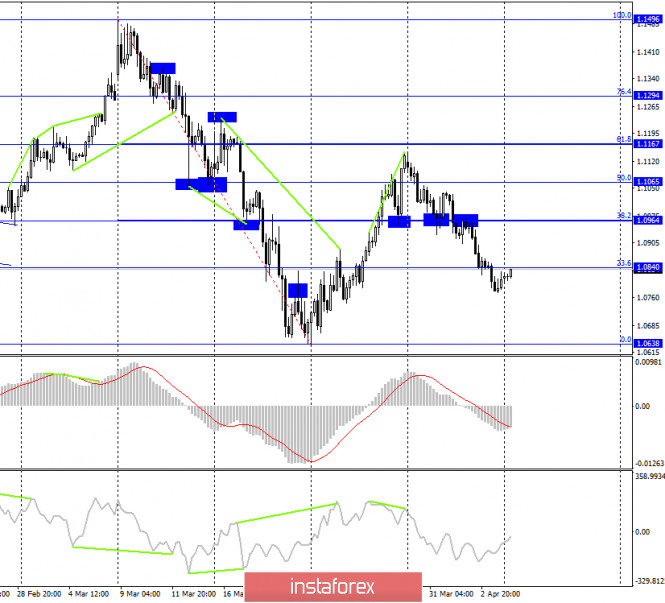 On the 4-hour chart, the EUR/USD pair continued the process of falling on April 3 and made a consolidation under the corrective level of 23.6% (1.0840). Thus, the process of falling can be continued today in the direction of the next Fibo level of 0.0% (1.0638). At the moment, the pair has returned to the level of 23.6%, so the rebound of quotes from this level will increase the probability of further falls. Closing quotes above the level of 23.6% will work in favor of the British dollar and some growth in the direction of the corrective level of 38.2% (1.0964). Buy signals on the hourly and 4-hour charts may coincide. Today, the divergence is not observed in any indicator.

On the daily chart, the EUR/USD pair made a consolidation under the corrective level of 23.6% (1.0840), which also increases the probability of continuing to fall in the euro currency quotes. I can also note that the pair's quotes have returned to the downward trend corridor and are approaching its lower line, from which a rebound may follow.

On the weekly chart, the EUR/USD pair continues to trade near the lower line of the "narrowing triangle". Thus, at the moment, I believe that this line was rejected. If so, I expect the quotes to grow in the long term in the direction of approximately the level of 1.1600.

On April 3, a lot of important economic reports were released in America. The unemployment rate in March rose to 4.4%, the number of people employed in the non-agricultural sector was -701,000, and the index of business activity in the non-manufacturing sector ISM unexpectedly turned out to be higher than forecasts and amounted to 52.5. It is easy to guess that the first two reports were much worse than the traders' expectations. However, as we can see, the dollar continued to grow on Friday, so all the reports did not attract any attention from traders.

News calendar for the United States and the European Union:

The April 6 news calendar for the United States and the European Union does not contain any important reports or events.

Traders continue to pay more attention to graphical analysis and the COVID-2019 virus epidemic in the world. According to the latest data, the number of cases is approaching 1.3 million. 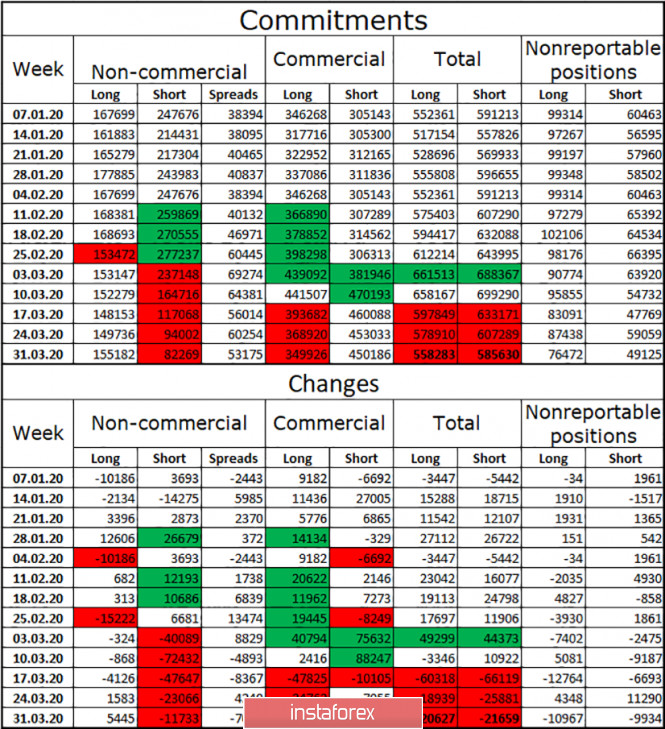 The new report was released, as always, on schedule on Friday, that is, three days late. According to this report, the total number of contracts held by major players continues to decline. Over the past week (until March 31), both long and short contracts lost approximately 20,000 each. Thus, the losses were approximately equal, which means that the ratio of forces between bull traders and bear traders did not change. The total number of short contracts prevails over long ones. However, this was the case a week ago, two weeks ago, and three... Thus, we conclude that the major players also remain "bearish", which is confirmed by the daily chart, which clearly shows the trend corridor. Thus, the overall trend of the pair remains downward. However, new growth in this trend may begin soon.

Forecast for EUR/USD and recommendations for traders:

Now I recommend being careful with the new sales of the euro currency. There are no signals for new sales yet. But the rebound from the level of 1.0840 on the 4-hour chart can serve as such a signal. The target will then be 1.0638. To buy a pair, you need to close the rate above the level of 1.0840 and close above the trend line on the hourly chart. The goal is 1.0964.